Weaving Through the Landscape of HER2-Positive Breast Cancer 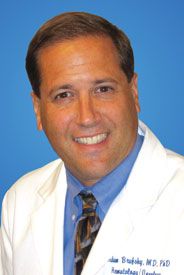 As tomorrow’s Oncologic Drugs Advisory Committee (ODAC) hearing on neratinib approaches, the breast cancer community is waiting to see if the FDA panel will decide that the benefits of the agent outweigh the significant toxicity of diarrhea in patients with HER2-positive breast cancer.

Adam M. Brufsky, MD, PhD, says that it is not so much the resistance that is cause for concern right now, but the sites wherein current agents cannot penetrate—specifically, the central nervous system (CNS).

“I think it is incumbent on all of us to figure out what to do. I think some of these small molecule HER2 tyrosine kinase inhibitors may be the beginning of the pathway forward. So, it is not so much resistance, but sanctuary sites in HER2 right now,” said Brufsky.

What do you think of neratinib, given the impending ODAC meeting?

In an interview with OncLive, Brufsky, professor of Medicine, associate chief of Hematology/Oncology, co-director of the Comprehensive Breast Care Center, associate director of Clinical Investigation, University of Pittsburgh, discussed neratinib, overcoming resistance to HER2-targeted therapy, and the impact of newer agents in HER2-positive breast cancer.I think that Puma Pharmaceuticals has done everything that the FDA has asked. The drug met the endpoints. Clearly, there is a 2% to 3% improvement in progression-free survival at 2 years that actually widens at 3 years and even 5 years. What is interesting, is that the progression-free survival also appears to be highest in those with the highest initial risk. So, in other words, patients with larger tumors tended to have a better response.

In the ExteNET trial, which is the trial that is going to be evaluated by ODAC, the benefit appeared to be limited to the ER-positive, HER2-positive patients. Which will probably come up as a question, but on the other hand, the data is the data, and I think that the endpoints that were given for approval were met. The toxicity is diarrhea and it is fairly substantial—about 15% to 20% of patients&mdash;but it is controllable.

I think that if this drug gets approved, I will [tell] my patients to expect about a month of really close monitoring of the diarrhea and intense loperamide. Therefore, I think if you have high-risk disease, you will be willing to put up with a month of this.

What has been the recent progress regarding resistance to HER2-targeted therapies?

The bottom line is that you never know what an ODAC panel is going to do, but on the other hand, I would be surprised if it didn’t get approved.Resistance to HER2-targeted therapies is an interesting question, because we are not sure if the resistance is truly to HER2, or it is to the underlying partner to the HER2 agent. There are strategies that people are employing—in other words, some people feel it may be a result of say, issues with receptor tyrosine kinase. Therefore, oral agents may work, such as lapatinib (Tykerb), neratinib, other drugs like poziotinib, tucatinib&mdash;these drugs may help.

There are other things we have tried. We have looked at the mTOR pathway, but the BOLERO-3 trial did not really work that well—it had modest benefit where we added everolimus (Afinitor) to vinorelbine and trastuzumab (Herceptin).

I think the latest possibility could be in the CDK 4/6 pathway; there are a lot of trials out there now of trastuzumab plus various CDK 4/6 inhibitors—abemaciclib, etc. So, we’ll see what happens. Interestingly enough, there are trials not only with pertuzumab (Perjeta), which is kind of 1 area that does not really overcome resistance but actually probably amplifies the HER2 effect, but there are other anti-HER3 agents that are out there now that are in trials.

Out of these newer agents, are any distinguishing themselves?

It is not so much the resistance that we are worried about in HER2; it is the fact that a lot of the agents that we have do not penetrate the CNS. What is happening now, in HER2-positive disease, especially metastatic disease, is the same thing that happened in pediatric leukemia 40 years ago. And that is, we got really good at treating the systemic disease, but there are sanctuary sites—in this case, the brain. I think most of my colleagues would likely agree that about 50% of patients with HER2-positive metastatic breast cancer will eventually develop brain metastases at some point. We now keep them about 4, 5, 6 years without systemic progression, and I think that is probably going to be the major cause of death in these women. In terms of anti-HER2 effect, there is not a lot of difference now. I have never been a big fan of the concept of trastuzumab resistance. I mean, I am sure there is, and it probably has something to do with the processing of the drug. There are a lot of things that we do not understand about processing of proteins to the endoplasmic reticulum—it’s like a big black box. Although, I think there is some very interesting and profound work that is being done right now with the basic concepts behind that. And I think that, probably, cancer cells do use this processing of receptors in some way to evade growth control. In that case, that is probably where the resistance occurs, if it occurs at all. Some of the things people have talked about like PTEN, AKT—I am just not sure how clinically relevant that is. That may be sort of controversial for me to say, but I am not sure how relevant a lot of that is.

In the HER2 business right now, it is resistance to the underlying therapy. In my own opinion, I do not think any current agent is distinguishing itself as an agent that could overcome trastuzumab resistance.