What is the Role of Surgery in TSGCT?

Shreyaskumar R. Patel, MD: Let’s transition into our second segment of the conversation. We will talk about surgical management of tenosynovial giant cell tumors. These are patients who generally will present through the orthopedic surgery conduit. Because of the relatively benign and localized nature of the tumor, surgery has been, and will remain, the mainstay of therapy. Let me invite Dr Abraham back to review some of the general principles of surgical management of these patients with tenosynovial giant cell tumor.

John A. Abraham, MD: When we are treating these conditions surgically, the first important step is to make sure we have evaluated whether we think we’re dealing with a localized form or a diffuse form of disease because that radically changes the surgical technique. I usually make sure I go through the MRI [magnetic resonance imaging]. We presented it at our tumor board. I look at it with our radiology colleagues and make sure there are no areas that I’m missing when I look at the MRI. I usually have the radiologist point out all the areas of disease that I need to address surgically. The goal of surgery is to remove all the diseased synovium. We don’t approach it in the same way as a sarcoma because we’re not necessarily doing a wide excision, which would mean cutting out the entire joint in most cases. We do want a gross total resection. Everything we can see, we would like to get rid of.

In reality, that’s not possible in any joint, and some joints are much harder than others. We do know that in the knee, for instance, we can probably remove around 85% of the synovium or 90% of the synovium with open surgical techniques. In some of the other joints, it may be less than that. The hip, in particular, can be very difficult because addressing the entire synovium means using a surgical dislocation, which has the potential of being a morbid procedure. The shoulder is a sensitive joint, and you can have problems with extensive surgical dissection of the shoulder. Each joint presents its own challenges, but the goal of surgery is the same, which is to remove as much of the synovium as possible.

When we choose the approach for a patient, we look at the imaging with an eye toward, “Am I able to do this or not?” That is where we draw the line between who is surgically resectable and who is not. If it’s extensive disease that involves the neurovascular bundle with significant erosion into the bone, these may be patients who, right off the bat, we know may not be able to achieve a complete excision. Then the question arises, “Is it worth subjecting our patient to a partial surgery, or should we look at some other means?” In the past, we didn’t have any other means, so we would potentially do the best we could. Now that there are other means available, it’s worth considering those means. The goal is complete surgical excision.

Shreyaskumar R. Patel, MD: That’s a very good start. Let me see if Dr Kim has any additional thoughts on patient factors. How does the decision about surgery versus no surgery get made? What kind of surgery is used? When do you invoke other treatment modalities? Dr Kim?

Tae Won B. Kim, MD: It’s a fine balance. For the most part, when you have a fairly easily accessible area, surgical management would be the way to go for localized disease. For distal extremities, we definitely use surgical management as the approach tends to be fairly straightforward.

When it comes to diffuse-type disease, there are some considerations we have to make. It depends a lot on how much of the mass is intra-articular versus extra-articular. If we go to the knee, for example, there is a lot of PVNS [pigmented villonodular synovitis] or diffuse-type disease. And we see that has a lot of extra-articular extension in the posterior knee, where there’s a lot of the neurovascular bundle. Significant neurovascular involvement with significant bony erosion is certainly a consideration to be taken into account, and we would not pursue surgery up front.

When you look at the other factors that may be involved, often there are multirecurrent patients who have had numerous surgeries around the joint. On the MRI, it looks as if it’s a fairly reasonable resection to perform, but when you get in there, the only thing you can see is scar tissue around the major structures. Those patients are not the best candidates for up-front surgical resection. I have not personally prescribed for the treatment of TGCT or PVNS with radiation, although there are some limited studies looking at radiation therapy around the joint or within the joint as a way of increasing local control rates for this disease.

In terms of the other avenues of treatment, this is where I think a multidisciplinary team comes into play. With these multiple recurrences or large tumors, you really want to have an eye on the surgical side, the radiation side, and the medical oncology side coming together to look at this and say what the best up-front approach here is and what we are trying to achieve. Gross total resection is achievable in many patients, but you can’t clear the disease from the joint. It would be misleading to say that we can do that.

Transcript Edited for ClaritySupported by an unrestricted educational grant from Daiichi Sankyo. 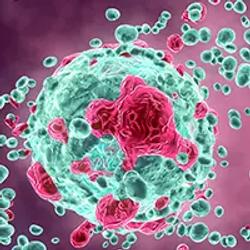