When the "Big C" Means Cure

Discussions with patients must carefully consider the understandable desire of patients for definitive and hopeful information while at the same time appreciating that poorly understood biology often makes definitive statements and declarations regarding prognosis problematic and not infrequently incorrect.

There are many difficult situations faced by oncologists in their daily practice. These include conversations regarding end-oflife care, advising patients about possible therapeutic options in the absence of less-than-optimal information to assist in providing guidance, and accurately predicting the risks of various and often severe adverse events for an individual patient when all that is known is the population- based statistical probability of these events.

Surely included in this list is the topic of cure—that is, discussing with patients and their families the realistic potential about whether that goal can be, or has been, achieved. Why is it so difficult to answer a patient’s questions about this possibility? The concept of a cure is an emotionally fraught and medically challenging one.

Let us first recognize the emotional impact for all patients when the diagnosis is cancer. As Susan Sontag so eloquently stated in her landmark essay, Illness as Metaphor1:

“Cancer patients are lied to, not just because the disease is (or is thought to be) a death sentence, but because it is felt to be obscene—in the original meaning of that word: ill-omened, abominable, repugnant to the senses.” The diagnosis of cancer generates considerable fear. Is it any wonder that there is likely nothing more important for patients with cancer and their families than to know if a cure is possible and when it has occurred?Yet a number of peer-reviewed reports have noted a rather striking lack of concordance between the known existing effectiveness of current antineoplastic therapy in particular clinical circumstances and patient perceptions of their own articulated goals for treatment if they find themselves in these settings.2,3

In truth, it should not be difficult to appreciate why many patients faced with a devastating diagnosis (eg, stage IV non—small cell lung or pancreatic cancer) might elect as a coping mechanism to focus on goals of therapy that are unfortunately highly unrealistic.

At the same time, patients with cancer presenting at the same stage, with apparently identical histologic features and grade of disease originating in the same organ may experience vastly different natural histories of their disease processes. We often do not have a clue how to answer this question, and simply ascribe the observation to the highly heterogeneous biology of malignant disease.

In a now classic work, The Median Isn’t the Message, a magnificent and thoroughly devastating repudiation of the concept of a fixed relationship between cancer survival statistics and the clinical course of a cancer in an individual patient, the late eminent evolutionary biologist Stephen J. Gould provided his perspective on the topic.4 Upon being diagnosed with an “incurable cancer”—which he outlived for nearly 20 years&mdash; Professor Gould viewed the survival curve of his own cancer type this way:

“The distribution was indeed, strongly right skewed, with a long tail (however small) that extended for several years above the 8-month median. I saw no reason why I shouldn’t be in that small tail, and I breathed a very long sigh of relief.”

Thus, although the literature has attempted to undertake a discussion of therapeutic goals in the context of cure as a realistic option, critical assessments have rarely been seen about when, in a given tumor type or a specific stage of disease, it is appropriate to declare that final victory has been achieved for an individual patient.Of course, there are several settings where it is possible to know relatively early in the clinically evident natural history of the condition whether a cure has likely been accomplished because recurrences overwhelmingly occur within a short time interval (ie, several years) following the completion of definitive therapy. Time to relapse in advanced germ cell tumors represents a good example of this situation.

However, in many cancers, recurrences of the disease process may occur over a far more extended period of time. Additionally, what might be viewed by the patient and family as devastating news that the cancer has recurred may in fact be the development of a new primary malignancy. For example, while the occurrence of widespread intra-abdominal cancer more than 5 years after the completion of definitive therapy for an advanced epithelial ovarian cancer may represent disease recurrence at this late date, the observed cancer may actually be a new primary peritoneal malignancy. A recent report regarding long-term follow-up of women diagnosed with breast cancer highlights this important but difficult issue. More than 4000 women with this malignancy treated on adjuvant therapy clinical trials from 1978 through 1985 by the International Breast Cancer Study Group were followed to examine the risk of recurrence.5 As anticipated, the highest annualized hazards of recurrence were within the first few years following diagnosis (initial 5 years: 10.4%) and the statistical probability decreased the longer patient was observed. However, the actual risk did not decrease to zero. In fact, for patients with estrogen-positive breast cancers, the annualized hazards for recurrence from 10 to 15 years, 15 to 20 years, and 20 to 25 years were 2.9%, 2.8%, and 1.3%, respectively.5

These are just a few examples of why the question of a “cure” remains complex. Discussions with patients must carefully consider the understandable desire of patients for definitive and hopeful information while at the same time appreciating that poorly understood biology often makes definitive statements and declarations regarding prognosis problematic and not infrequently incorrect. 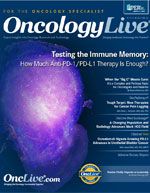