Dr. Simeone on Impact of PARP Inhibitors on Pancreatic Cancer

Dr. Weinberg on the Role of Cetuximab in Metastatic CRC
News > 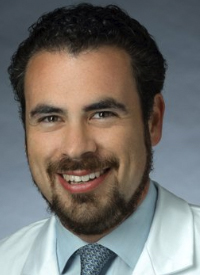 For patients with metastatic pancreatic cancer, frontline therapy includes FOLFIRINOX or the combination of gemcitabine and nab-paclitaxel (Abraxane). Although the combination of gemcitabine and nab-paclitaxel is associated with greater tolerability, both regimens may require dose reductions as a result of low blood counts, explained Benjamin Weinberg, MD.

OncLive: What treatment options are available for patients with metastatic pancreatic cancer?

Weinberg: There are several viable treatment options for patients with metastatic pancreatic cancer. There are a couple of standard frontline regimens: one is FOLFIRINOX with 5-FU, irinotecan, oxaliplatin, and leucovorin, and the other is gemcitabine and nab-paclitaxel; those are our basic standard frontline regimens. We also have an [FDA-]approved second-line regimen with nanoliposomal irinotecan, leucovorin, and 5-FU for patients who have disease progression on gemcitabine. Those are essentially the 5 active drugs that we have [in this space].

How do clinicians decide between frontline FOLFIRINOX and gemcitabine/nab-paclitaxel?

That's a very difficult question. It's very patient dependent. It is possible to have low blood counts with both regimens, so that's often what we're working between. We do think that older patients who don't have as good of a performance status or who are not walking around as much tend to not do as well with FOLFIRINOX, especially if they have other medical problems. That said, it's often a discussion we have with the patient. We try to expose the patient to all 5 drugs at some point, whether that's the 3 upfront and then the other 2 later on [or vice versa].

How is FOLFIRINOX tolerated?

In my practice, I often trim some of the doses a little bit because I think it makes it much more tolerable. We often use things like white blood cell growth factor support for patients who have low blood counts on that regimen. That's definitely something we're always thinking about. We know that there are some patients from a cancer standpoint who respond better to one versus the other. We tend to falsely think that FOLFIRINOX has a better response rate compared with gemcitabine/nab-paclitaxel.
... to read the full story
To Read the Full Story
REGISTER
LOG IN