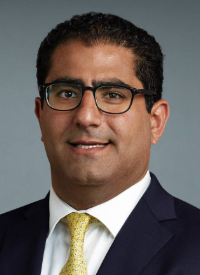 OncLive: What data have been most impactful in lung cancer over the past year?

Sabari: In the early-stage setting is the PACIFIC trial, which looked at durvalumab after patients received concurrent chemotherapy and radiation. The results of that study were groundbreaking leading to the FDA approval and the new indication for that regimen. There was a 12-month OS benefit for patients who received durvalumab consolidation therapy after chemotherapy and radiation.

In stage IV disease, [there are] 2 very important studies that were recently presented. First was KEYNOTE-189, which is a combination of pembrolizumab (Keytruda) plus chemotherapy versus chemotherapy alone. Second was the IMpower150 trial, which is a quadruplet regimen similar to what we saw in KEYNOTE-189, but using atezolizumab (Atezolizumab) in combination with carboplatin, paclitaxel, and bevacizumab (Avastin) versus carboplatin, paclitaxel, and bevacizumab alone.

What has been the impact of combination chemotherapy and immunotherapy?

That is a controversial topic right now. There is definitely synergy, and by combining drugs that work, you may get a better response rate, a better duration of response, and better OS. What chemotherapeutics are doing specifically, are improving the immune response so the immunotherapies can recognize and attack the cancers.

Where do we stand with biomarkers of immunotherapy?

I still order PD-L1 [testing] on my patients, and I still use the cut point of 50% to define whether a patient should receive pembrolizumab alone versus pembrolizumab in combination with chemotherapy. This is for my patients with non–small cell adenocarcinoma and those with non–small cell squamous cell lung cancer. I know out in the community, people are now ordering PD-L1 expression. If you parse the data, no matter how you look at it, people who have a higher PD-L1 expression benefit with immunotherapy. What I like to do with my patients is weigh the risks and the benefits of each therapy. Why add chemotherapy to a regimen for a patient with a PD-L1 expression of 100%?
... to read the full story
To Read the Full Story
REGISTER
LOG IN