Dr. Santos on the FDA Approval of Ramucirumab/Erlotinib in EGFR-Mutant NSCLC
News >

Padda Discusses Progress With Osimertinib and Next Steps in EGFR+ NSCLC 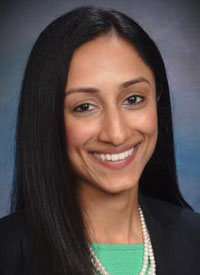 OncLive: What has been the impact of osimertinib on patients with EGFR-mutant NSCLC?

What is the safety profile of osimertinib?

The safety of this drug is based on its mechanisms. The way osimertinib was designed was to have less EGFR wild-type toxicity. Although it still has some wild-type toxicity—you are not completely absent of having a rash—we are seeing significantly lower rates [versus other TKIs]. There are similar rates of diarrhea that you would see with an earlier-generation TKI. There is also some rare cardiac toxicity that you should be mindful of, in the single-digit [percentage of incidence], such as prolongation of QT interval and decrease in left ventricular ejection fraction.

What are some emerging treatment strategies beyond frontline osimertinib?

Now that osimertinib has moved to the frontline setting, we have to figure out what to do after resistance to it. There were just data presented at the 2018 ESMO Congress by Suresh S. Ramalingam, MD, of Emory University, that started to examine this specific question.
... to read the full story
To Read the Full Story
REGISTER
LOG IN