Dr. Costello on the Future of Isatuximab in Relapsed/Refractory Multiple Myeloma
News > 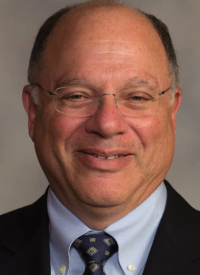 Split dosing with daratumumab (Darzalex) was found to be comparable with a standard dosing schedule in terms of safety and efficacy in patients with multiple myeloma in first infusion, suggesting greater convenience for patients and providers alike.

OncLive: How did split dosing with daratumumab compare with its traditional infusion?

Rifkin: This is a very important time in multiple myeloma with the advent of many new agents. In the presentation [at the 2018 ASH Annual Meeting], we discussed making the administration of daratumumab easier in the clinic and in the community. In the initial studies that were done with daratumumab, the first infusion took around 10 hours or so. In our poster, we studied patients who received this single infusion versus splitting the dose over the course of 2 days. We showed that there's a decrease in infusion reactions with split dosing. It was also much more convenient for patients and their caregivers.

What else did the study examine?

We went back and looked at [the data] from a health economics and outcomes research standpoint using our electronic medical records, as well as some other tools. In this case, we were able to present very nice, real-world evidence on splitting the dose of daratumumab.

What are the next steps that should be taken?

The next steps will be to let the data mature. Then, we'll start to look at integrating this approach with daratumumab split-dose infusions into other research and open studies.
Rifkin R, Singer D, Aguilar K, et al. Safety of split first dosing vs standard dosing administration of daratumumab among multiple myeloma patients treated in a US community oncology setting: a real-world observational study. In: Proceedings from the 2018 ASH Annual Meeting; December 4-8, 2018; San Diego, CA. Abstract 4846.