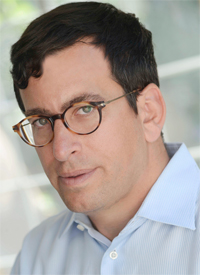 Edward B. Garon, MD
Combining pegilodecakin (AM0010) with nivolumab (Opdivo) or pembrolizumab (Keytruda) induced an overall response rate (ORR) of 41% in patients with advanced non–small cell lung cancer (NSCLC), according to findings from an early phase study presented at the 2018 ASCO Annual meeting.

At a median follow-up of 24.7 months (range, 9.1-39.1), partial responses were observed in 11 of 27 evaluable patients who received pegilodecakin plus a PD-1 inhibitor. An additional 12 patients had stable disease.

The median overall survival (OS) was 32.2 months in the patients who received pegilodecakin/pembrolizumab and the median progression-free survival (PFS) was 11 months. The median OS and PFS have not yet been reached for the cohort of patients receiving pegilodecakin plus nivolumab.

“Pegilodecakin when added to anti–PD-1 therapy in advanced NSCLC patients was associated with response rates and durability of benefit greater than has been seen with anti–PD-1 alone,” lead investigator Edward B. Garon, MD, director of Thoracic Oncology at the Jonsson Comprehensive Cancer Center at University of California, Los Angeles, wrote in their poster.

The median age in the pembrolizumab group was 74 (range, 56-80), 4 patients were male, and all 5 had an ECOG performance status of 1. Two patients had squamous histology and the other 3 had nonsquamous. The median number of prior therapies was 2 (range, 0-5) and all 4 patients tested for PD-L1 status had a PD-L1 level <1%.

Among the 29 patients receiving nivolumab, the median age was 62 (range, 40-84), 14 were male, and 15 were female. Eight had an ECOG performance status of 0 and 21 had a score of 1. Twenty-four patients had nonsquamous histology, 4 had squamous, and the histology for 1 was unknown. The median number of prior therapies was 2 (range, 0-5).

Commenting on the data in a poster session at ASCO, D. Ross Camidge, MD, PhD,professor, division of Medical Oncology, Joyce Zeff Chair in Lung Cancer Research, University of Colorado, said the data are positive, but the small number of patients necessitate a randomized trial to confirm the early signs of efficacy.

“Pegilodecakin plus PD-1 inhibition was associated with a greater response rate than is anticipated with PD-1 inhibition alone; however, the small number of patients in the cohorts [should be noted],” said Camidge, adding, “It is easier to be impressed by the activity in the lower PD-L1 groups, as the high PD-L1 groups are still within the ‘chance effect,’ given the small number of patients.”
Garon EB, Schneider JG, Wong DJL, et al. Responses and durability in NSCLC treated with pegilodecakin and anti-PD-1. J Clin Oncol. 2018;36 (suppl; abstr 9018).
<<< 2018 ASCO Annual Meeting