Dr. Bose on Treating Progression in Patients With Myelofibrosis

Dr. DiNardo on Rationale to Combine Enasidenib and Azacitidine in AML

The Search for Biomarkers in Metastatic Breast Cancer 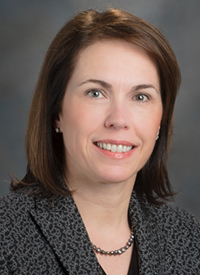 Susan K. Peterson, PhD, MPH
Patients who used mobile and sensor technology to track their symptoms demonstrated reduced severity of their symptoms compared with patients who received standard care, according to the results of a large randomized trial of patients with head and neck cancer who had undergone radiation therapy.

Lower symptom severity scores were noted both at the end of treatment and several weeks following radiation therapy in patients whose symptom data were tracked using the CYCORE (CYberinfrastructure for COmparative Effectiveness REsearch) system’s mobile and sensor technology.

“The patients who were randomized to CYCORE reported lower severity of general and head and neck-specific symptoms compared to those who were in the usual care group. And these outcomes were observed not only at the end of treatment but also 6 to 8 weeks after treatment as well,” said lead study author Susan K. Peterson, PhD, MPH, professor, Department of Behavioral Science, The University of Texas MD Anderson Cancer Center in Houston. Peterson presented the findings during a presscast ahead of the 2018 ASCO Annual Meeting.

The randomized study enrolled 357 patients with head and neck cancer who were scheduled to receive radiotherapy. Patients were randomized to either symptom tracking technology using the CYCORE system (n = 169) or to standard care (n = 188).

The CYCORE system, which was developed collaboratively by 4 institutions using a grant from the National Cancer Institute, used Bluetooth-enabled blood pressure cuffs and weight scales that were given to the patients to remotely collect weight, blood pressure, and pulse data. Additionally, patient-reported outcomes were collected through a mobile app.

Sensor readouts and symptom tracking data were transmitted back to MD Anderson and physicians monitored data Monday through Friday, intervening as needed. Peterson noted that significant infrastructure was developed to analyze and view the data in near real-time, and to ensure the security and confidentiality of patient information.

Standard care consisted of weekly visits with a radiation oncologist. Patients who were randomized to remote monitoring with CYCORE also had weekly in-person visits.

All patients completed the 28-item MD Anderson Symptom Inventory (MDASI) assessment at baseline, after completion of radiotherapy, and 6 to 8 weeks postcompletion. The assessment covered general symptoms that are common for patients with cancer, including pain, fatigue, and nausea, as well as those related specifically to patients with head and neck cancer—difficulty swallowing or chewing, skin pain/burning/rash, and problems tasting food. Symptom severeity was scored on a 0 to 10 scale with lower scores indicative of better outcomes.

No difference in score for symptom interference in daily life was seen in either group over time, but exact scores were not provided.

“We believe that good patient adherence plus the fact that this posed a minimal burden on clinicians to do the monitoring supports the use of systems like CYCORE during intensive treatment periods in cancer care,” Peterson said. “Using sensor and mobile technology to monitor patients during critical treatments of outpatient care can provide a timely source of information for clinical decision making and may ultimately improve quality of life and health outcomes.”

She noted that there was good patient adherence to daily monitoring protocols in the study, with 87% of patients adhering to blood pressure monitoring, 86% to weight tracking, and 80% to symptom inventory during radiation therapy in the CYCORE group.

“We believe that this is the first and largest study of its kind in head and neck cancer and our next steps would be to explore ways to implement this as part of clinical care, including in community cancer centers, where most patients receive their care,” she added.

ASCO president Bruce E. Johnson, MD, FASCO, commented during the presscast on the increasing number of studies looking at applications of generating patient-reported outcomes using technology and integrating them into practice for improved patient experiences.

“[This study] adds to the growing body of knowledge showing the value of integrating patient-reported outcomes into a routine oncology practice for symptom monitoring that a wide variety of people can participate in, and we think this is going to become an increasing way of getting timely information while both recognizing and treating the symptoms,” he said. “That ultimately leads to reduced complications.”
Peterson SK, Garden AS, Shinn EH, et al. Using mobile and sensor technology to identify early dehydration risk in head and neck cancer patients undergoing radiation treatment: impact on symptoms. J Clin Oncol. 2018 (suppl; abstr 6063).