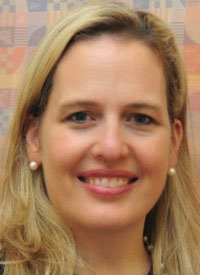 In the intention-to-treat (ITT) population, the median OS was 25.8 months with ipatasertib plus paclitaxel versus 16.9 months in the control arm of placebo plus paclitaxel (HR, 0.80; 95% CI, 0.50-1.28). The 1-year OS rates were 83% versus 68%, respectively. The analysis occurred at a median follow-up of 19 months in the ipatasertib arm and 16 months in the placebo arm.
“This is a clinically meaningful improvement of 9 months in overall survival. Which, indeed, is not too dissimilar to what we see in patients with PD-L1–positive TNBC who are receiving immune checkpoint inhibition in combination with chemotherapy,” said lead LOTUS author Rebecca Dent, MD, head of the Department of Medical Oncology at National Cancer Center Singapore. “The median overall survival [with ipatasertib] of greater than 2 years clearly represents a meaningful outcome in metastatic TNBC.”

Dent did note, however, that, “the [hazard ratio] confidence interval does cross 1, and, therefore, we do need confirmatory phase 3 results.”

Dent said that the IHC PTEN and NGS PIK3CA/ACT1/PTEN cohorts were all too small to make any definitive conclusions; therefore, as with the ITT data, a confirmatory phase 3 trial is needed.

The phase 2 LOTUS trial included 124 patients with previously untreated measurable locally advanced or metastatic TNBC not amenable to curative resection. Patients had to be at least 6 months removed from chemotherapy.

“What was different about this study compared to other studies in the first-line metastatic setting is that the chemotherapy-free interval was greater than or equal to 6 months. And as you know, in many studies, it’s actually 12 months. So this study included a group of patients with quite aggressive disease,” said Dent.

Patients were randomized 1:1 to paclitaxel at 80 mg/m2 on days 1, 8, and 15, with either ipatasertib (n = 62) at 400 mg/day or placebo (n = 62) on days 1 to 21 of a 28-day cycle until progression or unacceptable toxicity. The coprimary end points were progression-free survival (PFS) in the ITT and IHC PTEN-low populations. Key secondary end points included OS, overall response rate, and safety.

“What you can see [in patients aged <50 years] is that we have a hazard ratio of 0.41 that does not cross 1 in the confidence interval and we see…a 20-month improvement in overall survival. Now, this is hypothesis generating and needs to be confirmed in a phase 3 study, but I think it is biologically plausible, as many of us would agree, that patients who are under 50 who are triple-negative likely represent a different subgroup of [TNBC patients] who might be particularly susceptible to AKT inhibition,” said Dent.

Overall, 77% of patients in the ipatasertib arm had subsequent systemic anticancer therapy compared with 90% of patients in the placebo arm. These included immunotherapy (11% in ipatasertib arm vs 18% in control arm) and chemotherapy (77% vs 89%, respectively). Regarding specific chemotherapy treatment, platinum-containing regimens were administered to 53% of the ipatasertib arm versus 52% of the placebo arm, with non-platinum regimens being administered to 77% versus 89%, respectively.

Grade ≥3 adverse events (AEs) occurred in 56% of the ipatasertib arm compared with 45% of the placebo arm. Ipatasertib specifically led to AE-related treatment discontinuation in 7% (n = 4) of patients, AE-related dose interruption in 36% (n = 22), and AE-related dose reduction in 21% (n = 13).

“This combination is extremely well tolerated, especially when we compare it to other agents targeting this pathway. [We did] see noticeable diarrhea—in this particular study there were no prophylactic antidiarrheals given. What we also saw was an increase in sensory neuropathy, which is not entirely unexpected given that patients [in the ipatasertib arm] were on therapy longer and thus were exposed to a longer duration of paclitaxel, and hence, neuropathy would increase,” said Dent.