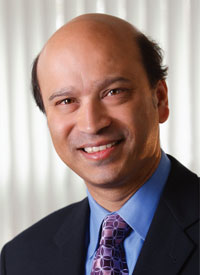 The release of new evidence that CDK4/6 inhibition results in survival gains for patients with hormone receptor (HR)–positive, HER2-negative metastatic breast cancer marks a new milestone for the therapeutic approach and may help set the stage for expanding use of these agents into earlier clinical settings.

“If you look at all the changes in how we treat hormone receptor–positive breast cancer with the introduction of new endocrine therapies and then more recently biological therapies, they have been approved because they improve time to progression. But they generally had not shown a survival advantage,” Tripathy said in an interview in advance of the 37th Annual Miami Breast Cancer Conference® (MBCC).

That changed in the CDK4/6 inhibitor landscape with the publication of updated results from pivotal trials for ribociclib in MONALEESA-3 and MONALEESA-7 and for abemaciclib in MONARCH-2, Tripathy noted. “Roughly, the survival advantage is about a 25% to 30% relative reduction in the risk of death, so a pretty important benefi t has now been identified,” he said.

Palbociclib (Ibrance), the first CDK4/6 inhibitor to gain approval, has not yet demonstrated a statistically significant OS advantage in a randomized trial, although the median OS is improved for patients who received the drug with ET in clinical trials. Those results might change with further analyses, Tripathy said.

A leading investigator in the pivotal ribociclib studies, Tripathy is professor and chairman in the Department of Breast Medical Oncology, Division of Cancer Medicine, at The University of Texas MD Anderson Cancer Center in Houston. He is serving as a cochair of MBCC.

In addition to updated survival data, Tripathy discussed other key facets of CDK4/6 therapies in advance of MBCC, including evolving insights into mechanisms of resistance to the agents and expanding use of the drugs into adjuvant treatment settings.

The Rise of CDK4/6 Inhibitors

The introduction of CDK4/6 inhibitors has changed the standard of care for patients with advanced HR-positive, HER2-negative breast cancer in the United States. The drug class was launched in 2015 with the FDA’s approval of palbociclib, followed by ribociclib and abemaciclib in 2017, based on clinical trial findings showing that each of the agents significantly delays progression when added to ET in patients with metastatic disease.1-3

By 2019, nearly half of newly diagnosed patients in this setting received a CDK4/6 inhibitor plus ET as fi rst-line treatment for metastatic breast cancer, shifting the paradigm away from ET alone and chemotherapy, according to findings from a real-world study presented at last year’s San Antonio Breast Cancer Symposium (2019 SABCS).

To analyze treatment patterns, investigators culled through deidentified patient records in the Flatiron Health Analytic database for women ≥18 years who received first-line treatment for HR-positive, HER2-negative metastatic breast cancer between August 1, 2015, approximately 6 months after the approval of palbociclib, and November 30, 2018. In all, they reviewed treatments given to 4112 patients.

Although there are several variations in the specifi c indications for each of the approved CDK4/6 inhibitors, all of the drugs are approved for patients with HR-positive, HER2-negative advanced or metastatic breast cancer.