Dr. Shah on the Utility of MRD in Frontline Multiple Myeloma
OncologyLive > December 2015 >

Amid a growing understanding about the role of epigenetics as a driver of cancer, researchers have turned their attention to a key player in the process: histone deacetylases (HDACs).

The Epigenetics of Cancer

The classical view of cancer is as a genetic disease, driven by changes such as mutations to the sequence of genes involved in hallmark cellular processes such as growth and proliferation. In the past several decades, it has become clear that epigenetic abnormalities that alter gene expression without changing the DNA sequence are equally important. Epigenetics describes a secondary layer of regulation of the genetic material; while the specific sequence of DNA in a gene instructs the cell about what to make, epigenetics dictates when and where it will be made.

At least 8 distinct types of modification have been described, including acetylation, methylation, phosphorylation, and ubiquitination. The specific pattern of modifications, attained by a balance between the different enzymes that govern them, acts as a kind of regulatory code for the genetic material, ultimately dictating gene expression. Disruption of this delicate balance has been associated with the development of a wide variety of human cancers.

Acetylation and deacetylation, the addition and removal of acetyl groups, is governed by enzymes known as histone acetylases (HATs) and histone deacetylases (HDACs), respectively. Acetylation is among the best-characterized modifications of the histone proteins. 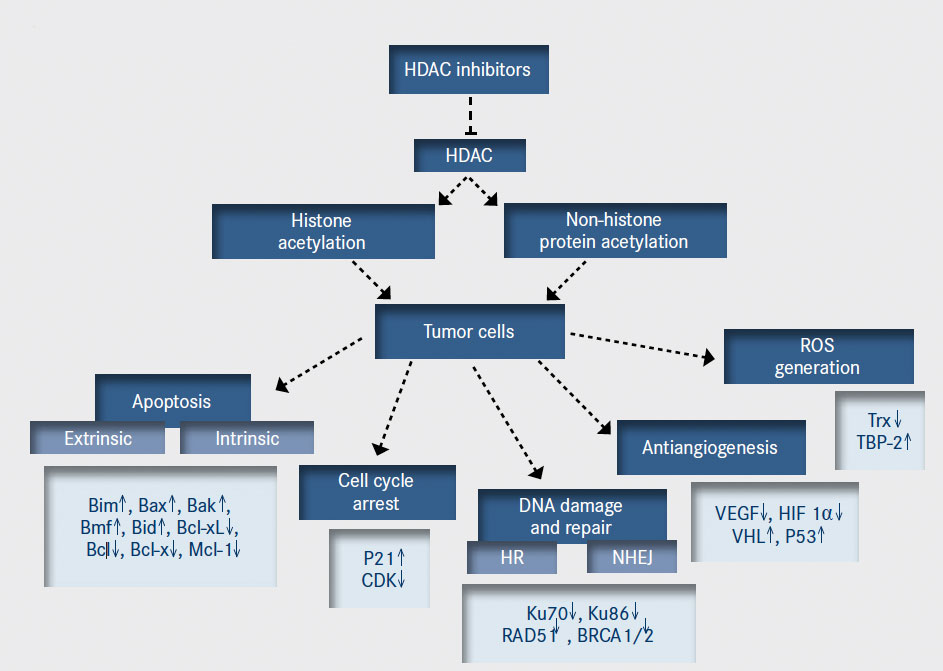 This illustration captures the diverse proteins and processes that potentially could be affected by inhibiting HDAC enzymes.
... to read the full story