Dr. Simeone on Benefit of Neoadjuvant Gemcitabine in Pancreatic Cancer

Dr. O'Reilly on the Potential Role of Veliparib in Pancreatic Cancer

Von Hoff's Quest Is for a Cure in Pancreatic Cancer 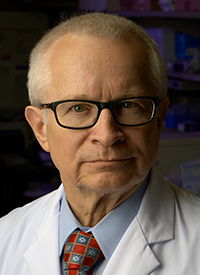 Daniel D. Von Hoff, MD
It was the unfamiliar, umbrella-shaped leaf of the gingko biloba tree that taught Daniel D. Von Hoff, MD, a lesson—one that would help shape the course of his career as a top pancreatic cancer researcher. As a biology undergraduate at what was then Carroll College, Von Hoff studied with Professor Roy Christoph, who led the class outside to study vein patterns and other qualities of the trees dotting the Waukesha, Wisconsin, campus. “He demanded excellence, and he taught observation,” said Von Hoff, now 70 years old and physician in chief at Translational Genomics Research Institute (TGen) in Phoenix, Arizona.

He is widely published, with more than 650 papers, 140 book chapters, and 1080 abstracts. He also has won the 2010 David A. Karnofsky Memorial Award from the American Society of Clinical Oncology (ASCO) for his contributions to the field, is a past president of the American Association for Cancer Research (AACR), and is a past member of a presidential National Cancer Advisory Board from 2004 to 2010, among other accolades.

Throughout his career, the powers of observation have helped guide Von Hoff. Although he initially planned to focus on infectious disease, his first rotation as an intern in medicine at the University of California, San Francisco, was oncology—and it took him in a new direction.
... to read the full story
To Read the Full Story
REGISTER
LOG IN