The addition of SDX-7320, a novel inhibitor of methionine aminopeptidase 2, to palbociclib was found to inhibit MCF-7 tumor growth and reduce the expression of proteins associated with resistance to palbociclib. 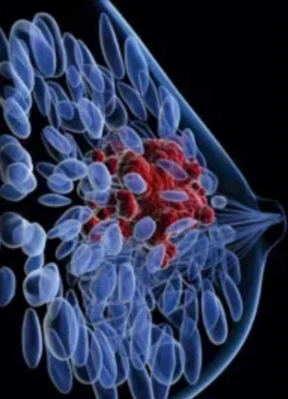 The addition of SDX-7320, a novel inhibitor of methionine aminopeptidase 2 (MetAP2), to palbociclib (Ibrance) was found to inhibit MCF-7 tumor growth and reduce the expression of proteins associated with resistance to palbociclib, according to data from a study virtually presented during the AACR Annual Meeting 2021.1

Results indicated that SDX-7320 and palbociclib, when given as single agents, demonstrated significant inhibition of tumor growth. However, additional efficacy was observed when the agents were combined.

When SDX-7320 was administered as a monotherapy at a dose of 8 mg/kg, it yielded a tumor growth inhibition rate (TGI) of 49%. Single-agent palbociclib, delivered at 20 mg/kg, elicited a TGI rate of 47%, while 40 mg/kg of palbociclib resulted in a TGI rate of 65%.

"[Due to the fact] the tumor growth in the vehicle animals declined after day 25, the analysis focused on the day 25 data,” Peter Cornelius, PhD, senior director of Translational Research at SynDevRx, said in a presentation on the findings. “All agents had statistically significant effects on tumor growth; however, the combination showed the greatest effect on tumor growth inhibition, with the highest dose [demonstrating] the largest effect, at 80% TGI.”

SDX-7320 is a prodrug of a fumagillin-class, small molecule MetAP2 inhibitor. The prodrug is a polymer-drug conjugate comprised of a hydroxypropylmethacrylamide – methacrylamide co-polymer carrier, a specific enzyme-cleavable peptide linker, and the pharmacologically active fumagillol derivative SDX-7539.

In vivo, enzymes cleave the polymer-drug conjugate to release the active drug. Polymer-drug conjugation has many benefits, according to Cornelius. This may help limit central nervous system penetration of the small molecule, a toxicity commonly observed with other MetAP2 inhibitors, and can also solubilize the hydrophobic small molecule. Moreover, enzyme-mediated release reduces small molecule concentrations in general circulation. 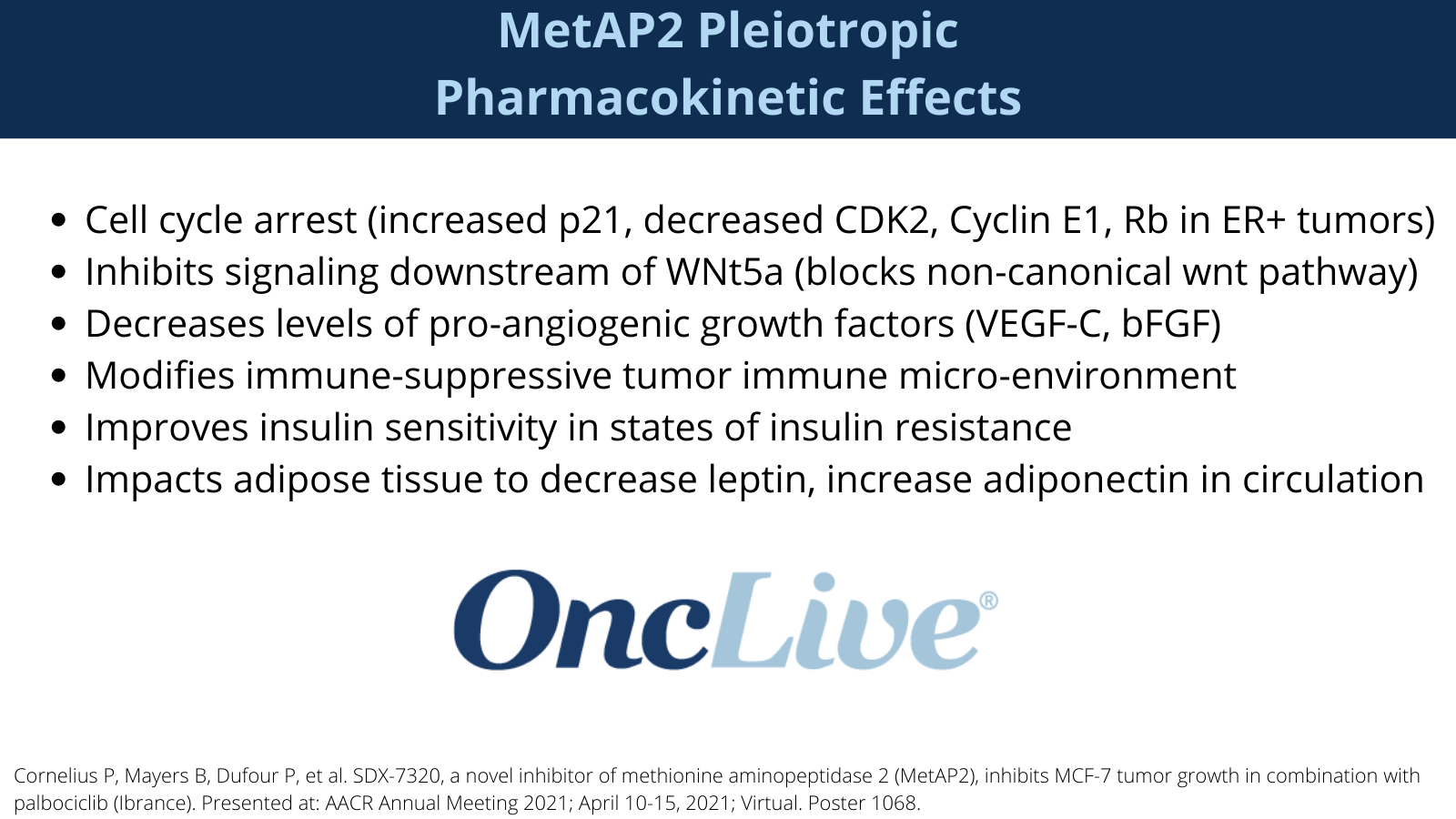 “Overall, polymer-drug conjugation [has] many [benefits] and [they] include effects on pharmacokinetics, pharmacodynamics, and safety,” Cornelius said.

The objectives of the study presented during the meeting were to examine the antitumor activity of SDX-7320 and palbociclib as single agents and in combination in orthotopic MCF-7 xenografts. Investigators also sought to measure the changes in known and reported mechanisms of treatment resistance to CDK4/6 inhibitors.

To do this, investigators implanted female nude mice with a single 90-day, 0.72 mg β-estradiol pellet 3 days before cell inoculation. They also injected MCF-7 cells (5 x 106 in 1:1 PBS/Matrigel) into the fourth mammary gland. When the group mean tumor volume was 125 mm3 to 175 mm3 with no tumors measuring less than 100 mm3, investigators initiated treatment with the study drugs. Tumor volume and body weight were measured twice weekly, with gross observations made on a daily basis.

Once the study had reached completion, investigators collected whole blood via cardiac puncture for a complete blood count and tumors were dissected (n = 3). While half of each tumor was placed in RNALater for gene expression analysis, the other half was homogenized in a radioimmunoprecipitation assay buffer, which contained protease and phosphatase inhibitors that were then frozen at -70 degrees Celsius.

“The doses of SDX-7320 used are moderate, at 8 mg/kg [and administered] subcutaneously every 4 days, [while the dose of] palbociclib is either low at 20 mg/kg or moderate at 40 mg/kg,” Cornelius noted.

Additional data indicated that although SDX-7320 usually induces loss of fat mass in normal animals, the combination did not appear to significantly impact body weight.

In the phase 3 PALOMA-3 trial (NCT01942135), which examined palbociclib in combination with fulvestrant (Faslodex) in hormone receptor–positive, HER2-negative metastatic breast cancer following progression on endocrine therapy, identified severe neutropenia as a major toxicity associated with the CDK4/6 inhibitor.2 Fifty-five percent of patients on the trial experienced grade 3 neutropenia with the combination.

“Unexpectedly, the high-dose combination of SDX-7320 and palbociclib reversed suppression of neutrophils seen with either agent alone, which may bode well for any future combination with these 2 agents,” Cornelius said.

Patients who are treated with CDK4/6 inhibitors will eventually develop resistance and progressive disease; this has become an active area of research, according to Cornelius. Some of these potential mechanisms of resistance include cyclin E1, CDK2, Akt signaling, autophagy, and cancer stem cell initiation.

Investigators evaluated the impact of SDX-7320 alone and in combination with palbociclib on potential mechanisms of CDK4/6 resistance by dissecting tumor tissue (n = 3/group); the samples were homogenized and frozen, and then were later thawed and analyzed using an automated Western blot device.

High levels of cyclin E1 were associated with resistance to palbociclib, with lower gene expression translating to longer progression-free survival.

“Given the significant association between reduced expression of cyclin E1 in PALOMA-3 and improved outcomes, we looked at cyclin E1 protein in our study and showed that SDX-7320 reduced cyclin E1 inside the tumors,” Cornelius explained. “When combined with high-dose palbociclib, additional benefit [was observed].”

Moreover, CDK2 protein was reduced by single-agent SDX-7320, as well as palbociclib monotherapy; however, the combination of SDX-7320 plus 40 mg/kg of palbociclib yielded additional decreases relative to both the vehicle-treated controls and SDX-7320 monotherapy. The change in intratumoral CDK2 protein relative to the vehicle proved to be significantly greater with the combination vs SDX-7320 alone.

Moreover, SDX-7320 monotherapy successfully suppressed levels of Akt while palbociclib did not. The combination of palbociclib and SDX-7320 resulted in maintained suppression of Akt protein, Cornelius said. Additionally, levels of Phospho-Akt were suppressed by SDX-7320 alone and with the high-dose combination. The impact of the 2 agents on retinoblastoma (Rb) protein was also examined during the trial

"Given the observation from PALOMA-3 that lower expression of Rb protein exhibited a trend toward better outcomes, we measured Rb protein in our samples and showed that SBX-7320 and palbociclib [alone] both suppressed Rb protein,” Cornelius said. “However, when combined, we saw an additional suppressive effect.”

Lastly, investigators measured an autophagy marker, LC3B protein, given its link between autophagy and resistance to CDK4/6 inhibitors. Both doses of palbociclib increased the expression of LC3B protein, which was attenuated by SDX-7320.

Investigators plan to complete the ongoing analysis of gene expression data, as well as develop a palbociclib-resistant MCF-7 model to confirm whether SDX-7320 is able to overcome resistance to the palbociclib.