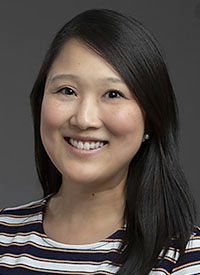 Data from the phase III ECHELON-1 trial continue to showcase favorable progression-free survival (PFS) with the addition of brentuximab vedotin (Adcetris) to standard 3-drug chemotherapy versus 4-drug chemotherapy in patients with newly diagnosed, advanced-stage classical Hodgkin lymphoma. However, until an overall survival (OS) benefit is reported with brentuximab vedotin, the decision of which regimen to pursue should be based on toxicity, said Seo-Hyun Kim, MD.

“The [long-term] data show that the majority of peripheral neuropathy does improve over time, but it doesn’t resolve in everyone. That’s something a 30-year-old patient might have to deal with long-term,” said Kim. “If someone has really severe peripheral neuropathy, I might shy away from [brentuximab vedotin], whereas if someone is not a candidate for bleomycin, [brentuximab vedotin and] AVD becomes much more of a frontrunner.”

Given that both regimens carry toxicity, investigators are continuing to search for ways to mitigate the associated adverse events and prolong survival. For example, in an ongoing phase III trial (NCT03907488), investigators are evaluating the addition of nivolumab (Opdivo) or brentuximab vedotin to AVD in patients with newly diagnosed, advanced-stage disease.

In an interview during the 2019 OncLive® State of the Science Summit™ on Hematologic Malignancies, Kim, a medical oncologist at Rush University Medical Center, discussed frontline treatment considerations in stage III and IV classical Hodgkin lymphoma and exciting combinations on the horizon.

OncLive: What is the prognosis of patients with advanced-stage Hodgkin lymphoma?

Kim: Hodgkin lymphoma is considered one of the most curable cancers. With prior standard upfront therapy, the majority of patients did pretty well. However, there is a population of patients who will have refractory disease or early relapse.

What clinical trials have impacted the frontline standard of care?

The ECHELON-1 trial compared the combination of brentuximab vedotin with AVD versus ABVD in patients with stage III and IV classical Hodgkin lymphoma. The 2-year PFS analysis showed about a 5% difference in favor of brentuximab plus AVD.

At the 3-year timepoint [of ECHELON-1], we saw that the PFS benefit widened to 7% between the brentuximab/AVD and ABVD arms. OS data are still pending.

Should brentuximab/AVD replace ABVD in practice?

I'm still waiting on the OS data, but it's a conversation I have with patients. I talk about the data we have. With AVBD, pulmonary toxicity is an issue with bleomycin. With brentuximab vedotin and AVD, peripheral neuropathy can have a significant impact on patients. The decision is based on toxicity and the patient’s comorbidities.

Have any modifications to the chemotherapy backbone been evaluated?

The RATHL study investigated de-escalating chemotherapy based on an interim PET scan. If patients have a negative PET2 scan, you can drop the bleomycin and complete the remainder of the 4 cycles of therapy with AVD. The results were pretty comparable; it was only about a 1.6% difference between the 2 arms. Given the toxicity of bleomycin, we will typically drop that agent in patients who have a negative PET scan after 2 cycles of therapy.

What does the future hold in Hodgkin lymphoma treatment?

I would say [the paradigm will include] combinations with checkpoint inhibitors. [Trials that are evaluating earlier use of] checkpoint inhibitors in combination with AVD will be interesting. Patients with Hodgkin lymphoma have such good long-term OS, but we're always looking at ways to maximize benefit and minimize toxicity. We’re looking to incorporate novel agents and see what we can do to try to abbreviate chemotherapy without losing long-term benefit.

There is a phase III trial that is evaluating nivolumab versus brentuximab vedotin in combination with AVD in patients ages 12 and up. It’s a big phase III study in the frontline setting.