Investigators propose that a PI3K-δ,γ inhibitor currently indicated for the treatment of 3 hematologic malignancies may be a key to boosting response rates in peripheral T-cell lymphoma, a disease setting defined by poor prognoses. 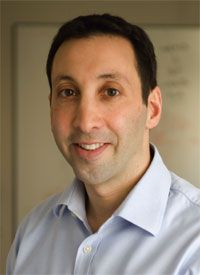 Investigators propose that a PI3K-δ,γ inhibitor currently indicated for the treatment of 3 hematologic malignancies may be a key to boosting response rates in peripheral T-cell lymphoma (PTCL), a disease setting defined by poor prognoses.

Duvelisib (Copiktra) is approved for the treatment of patients with relapsed/refractory (R/R) chronic lymphocytic leukemia (CLL) or small lymphocytic lymphoma (SLL) who have completed ≥2 prior lines of therapy. It is also cleared for use in patients with R/R follicular lymphoma (FL) after ≥2 systemic therapies.1

In the ongoing phase II PRIMO study (NCT03372057), investigators are evaluating duvelisib monotherapy at 75 mg twice daily in approximately 120 patients with R/R PTCL in the trial’s dose expansion phase to determine whether the efficacy observed with the agent in CLL and SLL will extend to PTCL. Recruitment is under way now that the dose-optimization portion of the trial has been completed. R/R PTCL is an aggressive lymphoma, and the need for better therapies is high. R/R PTCL carries a median overall survival (OS) of about 6 months. Further, most of the agents approved for relapsed disease have shown a median progression-free survival (PFS) of <4 months and induce response rates of <30%, according to Steven M. Horwitz, MD, an expert in T-cell lymphomas (TCLs) and the principal investigator (PI) for PRIMO at Memorial Sloan Kettering (MSK) Cancer Center in New York, New York. The 3 agents approved for R/R PTCL, pralatrexate, romidepsin, and belinostat, individually elicit response rates in the 25% to 30% range, Horwitz said.2 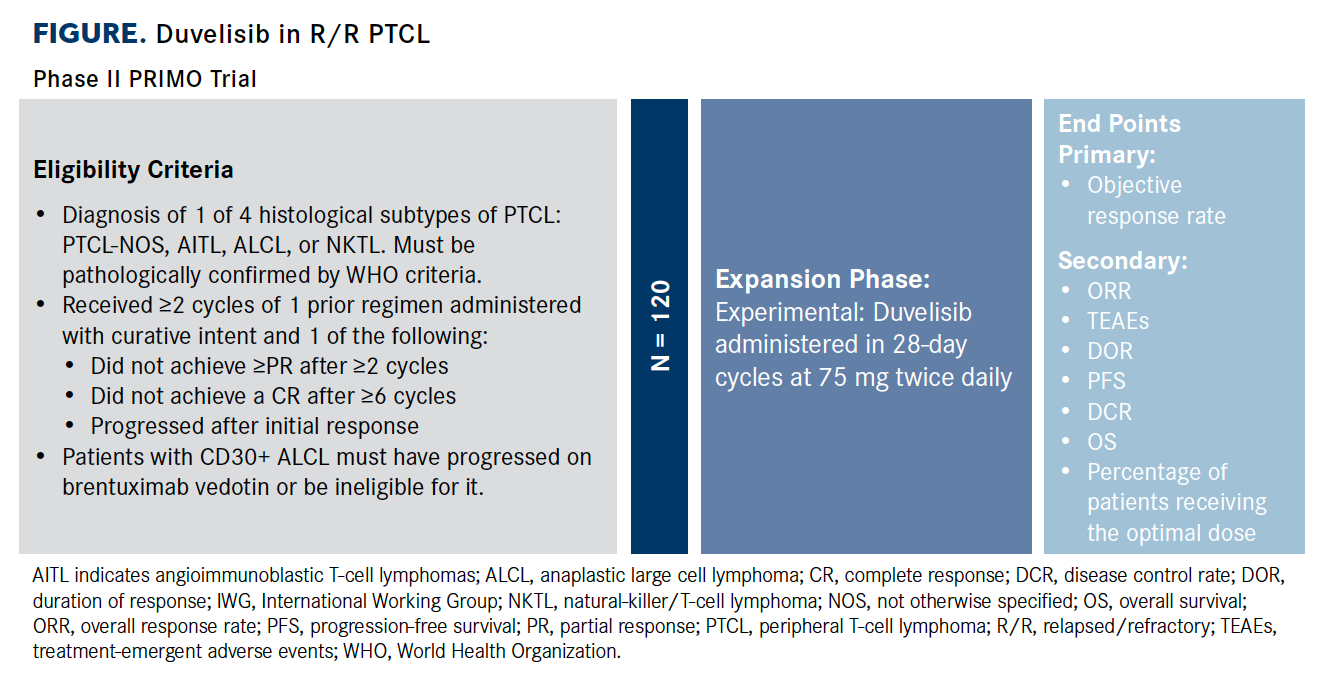 In 2018, the FDA approved the A+CHP regimen for patients with treatment-naïve anaplastic large cell lymphoma (ALCL) or other CD30-expressing PTCLs.3 The indication was based on findings from the phase III ECHELON-2 trial, which compared CHOP with A+CHP in frontline CD30-positive PTCLs. Notably, ECHELON-2 was the first prospective study to show an improvement in overall survival (OS) over SOC CHOP therapy in patients with treatment-naïve PTCL.4 Horwitz was the first author of ECHELON-2 and the PI of its site at MSK.

Chemotherapy will not be an effective therapeutic route for all patients with PTCL, said Jonathan Brammer, MD, PI of PRIMO’s site at The Ohio State University James Comprehensive Cancer Center in Columbus, Ohio.

In PTCL, autologous stem cell transplant (ASCT) is typically used as a consolidation approach for patients who attain a response for ASCT and is performed with curative intent, Brammer said. ASCT, also known as bone marrow transplantation, is a process in which a patient’s peripheral blood stem cells (PBSCs) are collected and removed from the body. The PBSCs are cryopreserved while the patient receives high doses of chemotherapy. The PBSCs are returned to the patient’s bloodstream after the completion of chemotherapy, subsequently allowing the bone marrow to produce new, healthy blood cells.5

“There is an urgent need for new therapies because although somewhat effective, the approved drugs do not provide any kind of substantial survival benefit in the majority of patients,” Brammer said. “Novel drugs are needed to get patients to allogeneic transplant or to prolong survival in patients who are not healthy enough to proceed with an allogeneic transplant.”

PRIMO investigators will evaluate duvelisib in a pretreated patient population. The study enrolled and continues to enroll patients with 1 of the following histologic subtypes of PTCL: PTCL-not otherwise specified; angioimmunoblastic TCLs; ALCL; or natural-killer/T-cell lymphoma (Figure).

Horwitz presented data from PRIMO’s dose-optimization phase at the 2019 American Society of Hematology Annual Meeting. Findings showed that the response rate was significantly higher among patients treated with the higher dose of duvelisib. The investigator-assessed ORR was 54% (7 patients) in cohort 2 versus 35% (7 patients) in cohort 1. When evaluated by a blinded independent review committee, the ORR was 40% and 62% in cohorts 1 and 2, respectively.2

The investigator-assessed CR rate was also higher in cohort 2, in which 31% of patients achieved a CR, compared with 25% of patients in cohort 1. At a median follow-up of 21.4 weeks, most responders were still in response.2

When patients achieve a CR with duvelisib, the remissions are “rapid” and typically occur within the first month of treatment, Brammer said. The PRIMO trial is expected to conclude in a few years and should provide investigators with a clear idea of how durable these responses are, Brammer added.

All patients enrolled in cohort 2 were able to complete 1 cycle of therapy, and 13 patients in cohort 1 were able to do so. Additionally, 7 patients in the low-dose group discontinued duvelisib treatment early due to disease progression and/or toxicity.2

Although all patients experienced TEAEs, there were no unexpected toxicities with duvelisib, and the investigators said most TEAEs were manageable with dose reductions and dose holds. Serious TEAEs occurred in 75% and 69% of the 25-mg and 75-mg cohorts, respectively, and included colitis, pyrexia, disease progression, sepsis, pneumonia, hyponatremia, dyspnea, pneumonitis, diarrhea, abdominal pain, maculopapular rash, and respiratory failure. AEs were fatal for 5 patients in cohort 1 and 1 patient in cohort 2.2

Grade 4 low CD4 counts, defined as <50 cells/mm3, led to early discontinuation of duvelisib therapy. Treatment discontinuations due to AEs occurred in 30% of the low-dose group and 8% of the high-dose group.2

“What we took away [from the dose-optimization phase] is that patients’ initial dose exposure probably matters for T-cell lymphoma,” Horwitz said. “It may be that in patients with very aggressive disease, if they don’t absorb [the therapy well] or don’t get high dose levels early on, they may progress and never get good exposure to the drug.”

After these 2 cycles, investigators will reduce the dose for patients who achieve CR, PR, or stable disease. These patients will subsequently receive 25 mg of the PI3K inhibitor twice daily for long-term disease control.2 The follow-up dose can also help mitigate toxicity of a later onset: “We know that long-term toxicities have a higher incidence at 75 mg,” Horwitz said.

Duvelisib is an inhibitor of the PI3K-δ and PI3K-γ isoforms expressed in normal and malignant B cells. The PI3K pathway comprises 4 class I isoforms, α, β, δ, and γ. Each isoform enables cancer cells to survive in a different manner.7 For example, PI3K-δ blockade reduces the number of hematologic tumor cells—specifically, malignant B-cell leukemia and lymphoma cells&mdash;without impeding the survival of normal immune cells. PI3K-γ obstruction hinders the migration of support cells in the tumor microenvironment that aid the survival of leukemia and lymphoma cells, such as CD4-positive T cells.8

“We think that there are probably some benefits to targeting the microenvironment and that’s probably going to happen more through gamma, which you don’t get in a delta-only inhibitor,” Horwitz said. “Many microenvironment effects like macrophage repolarization may be brought in through the PI3K-gamma and lead to a less-permissive microenvironment.”

Duvelisib’s orphan drug status succeeded its fast track classification. The FDA fasttracked the agent for patients with PTCL in September 2017.9

Accrual for PRIMO’s dose-expansion phase has been “going well” according to Brammer, who said that the study is open internationally and additional sites are being approved. Brammer and fellow investigators hope to complete accrual within 2020.

“This is a registration study, so duvelisib could very well be the next approved drug for PTCL if we confirm all of these exciting data in bigger numbers,” Brammer said.

“PTCL is a disease where we have a chance to cure it in the first line, but if we don’t, we only have moderately active drugs,” Horwitz said. “Our only other curative intervention or opportunity to elicit long term remissions is with an allogeneic transplant. Outside of transplantation, most patients who are not cured in the first line will eventually die from their disease.” Patients with systemic TCLs are typically treated with curative intent upon diagnosis. This involves combination chemotherapy regimens such as the current standard of care (SOC), cyclophosphamide, doxorubicin hydrochloride, vincristine sulfate, and prednisone (CHOP), Horwitz said. Brentuximab vedotin (Adcetris; A) might also be administered with cyclophosphamide, doxorubicin, and prednisone (CHP), he added.