The new generation of drugs that have emerged as part of antiemetic cocktails have demonstrated greater success in preventing and controlling CINV but the symptoms still present significant obstacles in anticancer therapy.

The new generation of drugs that have emerged as part of antiemetic cocktails have demonstrated greater success in preventing and controlling CINV but the symptoms—particularly nausea&mdash;still present significant obstacles in anticancer therapy, and the ultimate goal of prevention in all patients has yet to be attained.Based on differences in the timing of onset, CINV has been classified into five main categories: acute, occurring within 24 hours of the start of chemotherapy; delayed, occurring 24 hours to several days postchemotherapy; anticipatory, occurring before a subsequent cycle of chemotherapy (this is a learned response often triggered by a fear of CINV or previous experience); and breakthrough and refractory, both occurring despite preventive treatment.

CINV occurs following treatment with many different kinds of chemotherapeutic agent, but it was the introduction of cisplatin-based therapy in the late 1970s that dramatically increased the incidence of this toxicity and thrust it into the spotlight. Clinicians have since developed guidelines for the management of CINV, which introduced a classification system for cytotoxic drugs based on their emetogenic potential.

During the past 25 years, an improved understanding of the molecular pathways involved in the pathophysiology of chemotherapy-induced nausea and vomiting (CINV) has translated into major advancements in preventive treatment including FDA approval of two new drugs in the past 18 months. Nevertheless, it has become clear that these pathways are highly complex, involving a myriad of different neurotransmitters and receptors located centrally in the brain and peripherally in a number of tissues and organs.

Cisplatin falls into the category of highly emetogenic. The percentage of patients with acute emesis caused by single-agent cisplatin in the absence of preventive therapy is more than 90%. Chemotherapy drugs can also be classed as having moderate (>30%-90%), low (10%-30%), or minimal (0-<10%) emetogenic potential.

Nausea and vomiting are not restricted to chemotherapy and can be caused by other types of anticancer drugs; however, until recently this was largely overlooked. Numerous anticancer agents including targeted therapies and immunotherapies are now being assessed for their emetogenic potential.Two pathways have been pinpointed as particularly important in CINV: the peripheral pathway in the gastrointestinal (GI) tract and the central pathway involving the chemoreceptor trigger zone (CTZ) in the brain. Both pathways lead to the vomiting center, a network of neurons located in the region of the brain known as the nucleus tractus solitarius (NTS), which ultimately coordinates the physical manifestation of vomiting.

Chemotherapy is toxic to the enterochromaffin cells that are found throughout the GI tract and causes them to release increased amounts of the neurotransmitter serotonin. This binds to serotonin receptors located on structures in the GI tract and the brain and on the vagal afferent nerves that transmit signals between the two. This then either stimulates nausea and vomiting directly (acute CINV) or initiates the central pathway, resulting predominantly in delayed CINV.

Chemotherapy also stimulates the release of another neurotransmitter, substance P, which activates the central pathway by binding to neurokinin 1 (NK1) receptors, primarily in the NTS in the brain. The signal is then transmitted to the CTZ and then on to the rest of the vomiting center.

A number of other receptors and neurotransmitters including the dopamine, cannabinoid, his tamine, and acetylcholine receptors are thought to be involved in CINV; however, substantially less is known about their precise mechanism of action. It is also likely that there is significant crosstalk between the serotonin and NK1 receptor pathways and potentially other as yet unidentified pathways of nausea and vomiting.Initially, corticosteroids such as dexamethasone and dopamine receptor antagonists including metoclopramide and haloperidol formed the basis of preventive therapy for CINV, but these proved to have limited effectiveness in the setting of more highly emetogenic chemotherapy (HEC). With the introduction and widespread adoption of cisplatin-based chemotherapy, this became an increasingly important unmet need.

The discovery of key receptors involved in the pathways central to the pathophysiology of CINV prompted development of antagonists to block their effects. A major landmark came in the early 1990s with the approval of the first serotonin receptor antagonist, ondansetron, which was rapidly incorporated into routine clinical practice after demonstrating superior efficacy and safety to what was then the standard-of-care regimen of metoclopramide and dexamethasone. 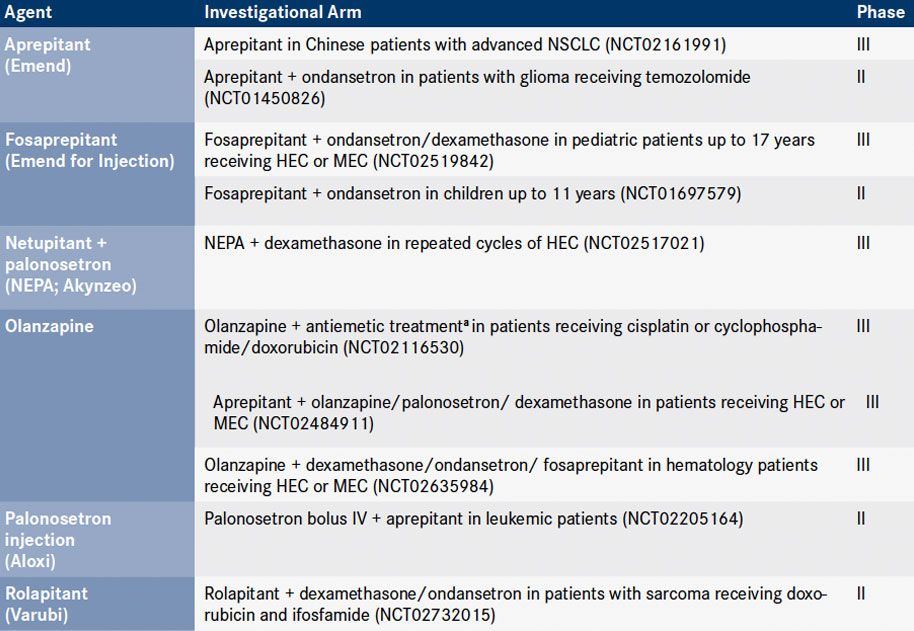 aAntiemetic regimen consists of ondansetron, granisetron, or palonosetron plus dexamethasone plus either fosaprepitant or aprepitant.

In 1997, ondansetron was joined by two additional serotonin receptor antagonists, granisetron and dolasetron. The three first-generation drugs have equivalent efficacy in preventing acute CINV at their recommended doses when used in combination with dexamethasone but they have limited efficacy against delayed CINV.

Although these events are mostly short-lived and clinically insignificant, there is a potential for more serious cardiac toxicity.

Serotonin receptor antagonists remain a central component of preventive treatment for acute CINV, although the first-generation drugs have mostly been replaced by a newer drug, palonosetron. First approved in an intravenous formulation in 2003, followed later by an oral formulation, palonosetron is more potent than the first-generation drugs, predominantly as a result of its higher binding affinity for the receptor and its significantly longer half-life. Palonosetron also has the advantage of not being associated with cardiac toxicity.Although serotonin receptor antagonists revolutionized the treatment of acute CINV, many patients experience delayed CINV, and these drugs were relatively ineffective in preventing that outcome. Palonosetron is the only member of this drug class to have demonstrated efficacy in both the acute and delayed settings in patients undergoing moderately emetogenic chemotherapy (MEC).

For the most part, however, efforts to better manage delayed CINV have focused on the development of drugs targeting the NK1 receptor, since its substance P—mediated effects seem to be particularly important in this later time period. Furthermore, studies suggest that the efficacy of palonosetron in the delayed setting may result from its ability to inhibit serotonin and NK1 receptor crosstalk.

In the same year that palonosetron was approved, the first NK1 receptor antagonist, aprepitant, was also brought to the market. An intravenous prodrug formulation, fosaprepitant, has also been approved, offering a potential option for patients who cannot tolerate oral administration of antiemetic therapy.

A meta-analysis of 17 trials involving more than 8500 patients clearly demonstrated that the addition of an NK1 receptor antagonist to the regimen of a serotonin receptor antagonist and dexamethasone provided superior outcomes, most importantly improving the complete response rate to more than 70%. The benefit was particularly noticeable in patients receiving HEC.

The Next Generation of Antiemetics

Guideline recommendations have been developed by various organizations including the National Comprehensive Cancer Network (NCCN) and the American Society of Clinical Oncology (ASCO), and the appropriate use of these drugs according to these recommendations forms the cornerstone of CINV management.The development of antiemetics has been ongoing, and several new drugs have emerged in recent years that offer improvements to the standard of care, particularly in the management of delayed CINV and in patients undergoing HEC.Netupitant is a novel NK1 receptor antagonist, designed with improved pharmacokinetic properties including a longer half-life. It was developed by Eisai, the same company that makes palonosetron, specifically for use in a single oral capsule that combines fixed doses of the two drugs. NEPA (Akynzeo) comprises 300 mg netupitant and 0.5 mg palonosetron to simultaneously target two key pathways of CINV and, it is hoped, to simplify treatment and improve adherence to guideline recommendations.

The FDA approved NEPA in October 2014 on the basis of several randomized, double-blind clinical trials that demonstrated superior complete response rates for NEPA compared with oral palonosetron, both in combination with dexamethasone, in patients receiving MEC and HEC. Complete response was defined as no vomiting and no need for rescue medication.

NEPA significantly improved the prevention of CINV across both the acute and delayed period postchemotherapy for multiple cycles of chemotherapy. Analysis of a subgroup of patients receiving cisplatin or an anthracycline plus cyclophosphamide in two of the clinical trials suggested that NEPA might also help to prevent nausea, which has typically proved much more challenging to treat than vomiting.

In one of the pivotal trials, which enrolled patients with HEC, NEPA/dexamethasone was also compared with a combination of oral aprepitant plus palonosetron and dexamethasone, and the two regimens appeared to have similar efficacy in the prevention of CINV. Few adverse events were reported with NEPA; most that were observed were of mild-to-moderate severity and there was no cardiac toxicity.An oft-cited issue with NK1 receptor antagonists is that these drugs are inhibitors of the cytochrome P450 3A4 (CYP3A4) enzyme, which plays an important role in drug metabolism. Since many anticancer agents are metabolized through the CYP3A4 pathway, there is a significant potential for drug interactions, although to date none of any clinical significance have been reported. Rolapitant (Varubi) is the most recently approved orally available NK1 receptor antagonist and was designed to address this issue to reduce the risk of drug interactions.

The FDA approved rolapitant in September 2015 based on data from three randomized, controlled, double-blind clinical trials. Two of these trials compared rolapitant with placebo in combination with intravenous granisetron and oral dexamethasone in patients receiving HEC. A third trial made the same comparison, using oral granisetron instead of an injection, in patients being treated with MEC or anthracycline-cyclophosphamide.

In all three trials, the complete response rate was significantly higher in the rolapitant arm during the delayed period after chemotherapy. The safety profile of rolapitant was similar to that of granisetron and dexamethasone alone.A number of other pharmacologic agents have been tested for the prevention of CINV including antagonists of other receptors thought to be involved in nausea and vomiting, as well as drugs approved for use in other indications for which the mechanism of action in CINV is unclear. In general, these drugs have lower therapeutic efficacy and greater potential for toxicity or their use is restricted to patients who are intolerant to standard antiemetics.

An exception is olanzapine, an antipsychotic that is thought to inhibit multiple receptors implicated in the pathophysiology of CINV. It has shown significant promise in phase III trials and, although it is not approved by the FDA for CINV prophylaxis, it is often used off-label by many oncologists.

Clinical trials suggest that olanzapine is as effective as NK1 and serotonin receptor antagonists at controlling vomiting, and may be more effective at preventing nausea. Additionally, it has been shown to be effective in the treatment of breakthrough CINV compared with the current standard of metoclopramide.

Preliminary results from a phase III trial of olanzapine in chemotherapy-naïve patients receiving HEC were presented at the 2015 Palliative Care in Oncology Symposium. The combination of olanzapine, aprepitant, and dexamethasone was compared with placebo, aprepitant, and dexamethasone. Significantly more patients reported no nausea with the olanzapine-containing regimen for both the acute and delayed period following chemotherapy.

Jane de Lartigue, PhD, is a freelance medical writer and editor based in New Haven, Connecticut.