The FDA has approved trabectedin for the treatment of patients with advanced soft tissue sarcoma, including liposarcoma and leiomyosarcoma subtypes, who have previously received chemotherapy that included an anthracycline.

The FDA has approved trabectedin (Yondelis) for the treatment of patients with unresectable or metastatic soft tissue sarcoma—specfically, liposarcoma and leiomyosarcoma&mdash;who have previously received chemotherapy that included an anthracycline.

The approval is based on results from the phase III ET743-SAR-3007 trial, in which trabectedin reduced the risk of disease progression by 45% versus dacarbazine in patients with advanced soft tissue sarcoma. There was also a slight survival trend with trabectedin, but the results were not significant.

“The treatment of advanced or metastatic soft tissue sarcoma represents a difficult challenge with few effective therapeutic choices available for patients,” said Richard Pazdur, MD, director of the Office of Hematology and Oncology Products in the FDA’s Center for Drug Evaluation and Research. “Today’s approval of Yondelis provides a treatment option for advanced or metastatic liposarcoma and leiomyosarcoma.”

The open-label, multicenter, phase III SAR-3007 trial compared trabectedin with dacarbazine in 518 patients with liposarcoma and leiomyosarcoma who previously received an anthracycline-containing regimen followed by at least one additional line of chemotherapy. The protocol required patients to have an ECOG performance status of 0 or 1. The study was conducted at 85 sites in four different countries, but 94% of the patients were enrolled in the United States.

Patients were randomized in a 2:1 ratio to 1.5 mg/m2 of trabectedin (n = 345) or 1.0 g/m2 of dacarbazine (n = 173) once every 3 weeks until disease progression or unacceptable toxicity. Trabectedin was administered through a catheter as an IV infusion over 24 hours and patients received dacarbazine as a 20- to 120-minute infusion. Patients in the trabectedin arm received 20 mg of IV dexamethasone as a premedication.

After 329 PFS events, patients receiving trabectedin had a statistically significant reduction in the risk of disease progression, with a median PFS of 4.2 months versus 1.5 months with dacarbazine (HR, 0.55; 95% CI, 0.44-0.70; P <.001). The 3-month PFS rates were 56% versus 34% for the two arms, respectively, and the 6-month PFS rates were 37% versus 14%. The PFS benefit with trabectedin was observed across preplanned subgroups, including patients with leiomyosarcoma and liposarcoma.

Additionally, the PFS benefit was confirmed by an independent review of radiographic PFS.

Postprotocol anticancer treatments were received by 56.1% and 47.0% of patients, respectively, in the dacarbazine and trabectedin arms. Several of the treatments, including pazopanib, gemcitabine, docetaxel, and other drugs, as well as radiation and surgery were used more commonly in the dacarbazine arm.

There were no unexpected toxicities with either of the treatments. All-grade adverse-event (AE) rates were 99.1% and 98.1% in the trabectedin versus dacarbazine arms, respectively, with grade 3/4 AE rates of 76.2% versus 51.6%.

Grade 3 AEs with the highest frequency in the trabectedin arm were increased ALT levels (25% vs 1%), neutropenia (21% vs 11%), anemia (14% vs 11%) and increased AST levels (12% vs 0%). Sixteen percent of patients receiving trabectedin had grade 4 neutropenia compared with 10% in the dacarbazine group.

According to a statement from the FDA, trabectedin "carries a warning alerting healthcare providers of the risk of neutropenic sepsis, rhabdomyolysis, hepatotoxicity, extravasation, tissue necrosis, and cardiomyopathy."

Trabectedin was originally derived from a sea squirt, Ecteinascidia turbinate, and is now manufactured synthetically. 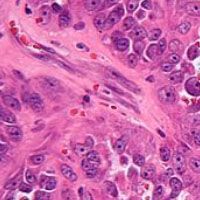