Genomic Advances Pave the Way for New Therapies in AML

In an OncLive Peer Exchange® panel, experts discussed novel cytotoxic and targeted agents in the pipeline that are likely to provide new options for treating certain individuals with acute myeloid leukemia. 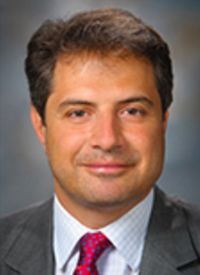 Although there has been a paucity of drug advances for patients with acute myeloid leukemia (AML) during the past several decades, novel cytotoxic and targeted agents in the pipeline appear likely to provide new options for treating certain individuals with the malignancy, according to experts who participated in an OncLive Peer Exchange® panel.

The panel members highlighted recent evidence showing the promise of emerging therapies for specific subgroups of patients during the program, “Moving Toward Precision Medicine in Adult Acute Myeloid Leukemia,” and stated that determining the optimal clinical settings for each agent will be the next steps for incorporating novel drugs into practice.

“Use of next-generation sequencing technology has generated a plethora of novel insights into the genetics of AML, providing important information about dysregulated signaling involved in leukemic transformation and leading to new therapeutic targets,” said Elias Jabbour, MD, who served as moderator for the program. “After a dearth of new therapies available for acute myeloid leukemia over the last few decades, we are transitioning into a new era with several promising strategies in late-stage development.”CPX-351 (Vyxeos) is a liposomal formulation of cytarabine and daunorubicin (molar ratio 5:1), which is designed to optimize synergy of the agents and improve incorporation and release of the drugs into the bone marrow. A phase III trial1 showed that patients with high-risk AML who received CPX-351 (100 units/m2 on days 1, 3, and 5) had significantly improved overall and event-free survival (EFS), including a subset of patients who had previously failed therapy with a hypomethylating agent, compared with participants who received standard 7+3 chemotherapy (cytarabine 100 mg/m2/d x 7 days, daunorubicin 60 mg/m2 on days 1, 2, 3). Furthermore, outcomes following allogeneic transplantation were better in patients who achieved remission with CPX-351 than for those treated with 7+3 chemotherapy.

Harry P. Erba, MD, PhD, said that the data may define new approaches for high-risk patients 60 to 75 years old with secondary AML and possi- bly for other subgroups. “The way we develop future drugs in AML is going to change dramatically because I think we are going to, for the first time in 30 or 40 years, have new standards of care for subsets of our patients,” said Erba.

Mark J. Levis, MD, PhD, indicated that, although overall survival (OS) appears to be similar between CPX-351 and 3+7 chemotherapy in younger patients, CPX-351 may be less toxic in certain combination therapies. However, Erba cautioned that CPX-351 was associated with greater myelosuppression in a phase IIb trial of patients younger than 60 years in their first relapse, which should be considered when contemplating combinations of CPX-351 with myelosuppressive agents.

Approximately 24% of patients with AML are believed to harbor FLT3 mutations, most of which are internal tandem duplication (ITD) aberrations. Additionally, point mutations have been described in the kinase domain (TKD) of the FLT3 protein. These mutations are associated with an increased risk for early and multiple relapses in AML, and have therefore emerged as an attractive therapeutic target. The eld of FLT3 inhibitors has grown “very crowded,” with several likely obtaining approval during the next few years, according to Levis.

Midostaurin, a FLT3 inhibitor effective against the ITD and TKD mutations, is the rst FLT3-targeted therapy to improve OS in a randomized phase III study. The FDA is evaluating the multikinase small-molecule inhibitor under the agency’s break-through therapy and priority review programs. In the RATIFY trial, midostaurin with standard chemotherapy and as single-agent maintenance therapy reduced risk for mortality by 23% compared with chemotherapy plus placebo in newly diagnosed patients with FLT3-mutated AML, with similar improvements in survival reported among TKD, high-ITD, and low-ITD mutation subgroups.

FLT3-targeted therapies may also improve eligibility for transplantation in patients with relapsed or refractory FLT3-positive AML. A combined analysis of 2 phase II trials showed that quizartinib, a new-generation FLT3 inhibitor, bridged approximately one-third of patients with relapsed or refractory FLT3-ITD—positive disease to transplantation, and those who received transplantation had significantly longer OS than those who did not. The QuANTUM-First study, a randomized phase III trial, has recently begun and will compare quizartinib with placebo during induction and consolidation and as maintenance therapy in newly diagnosed FLT3-ITD—positive disease, with a primary endpoint of EFS.

Although Erba said that the high selectivity of FLT3 inhibitors will be important for improving outcomes in patients with this high-risk mutation, he suggested that some of the off-target effects of the FLT3 inhibitors may be worthy of consideration. “We don’t know why there was a bene t with midostaurin. We assume it’s because it was inhibiting FLT3, but it also targets other tyrosine kinases, which may be very important in the bene t,” he said.

Erba also indicated that, unlike other next-generation FLT3 inhibitors, quizartinib does not inhibit FLT3 enzymes with TKD mutations, which may have contributed to the drug resistance observed in some patients with the TKD mutation during the phase I and expansion studies. Thus, he suggested that seemingly minor differences in the new FLT3 inhibitors may have dramatically diverse effects within the subgroup of patients with FLT3 mutations. IDH Inhibitors Mutations in IDH1 or IDH2 are present in approximately 20% to 22% of patients with AML, noted Martin S. Tallman, MD. AG120 and AG221 are first-in-class IDH1 and IDH2 inhibitors, respectively, that restore mutation-induced impairments in cellular differentiation without affecting native IDH activity.

Tallman said their unique mechanisms of action, their ability to achieve complete remission in a fraction of relapsed or refractory patients, and their low toxicity make IDH1 and IDH2 inhibitors “one of the most exciting novel agents” in development. Ongoing studies are investigating the effects of combining IDH1 and IDH2 inhibitors with induction chemotherapy in treatment-naïve patients. Tallman also said that studying the inhibitors in other settings, such as bridging to transplantation in a relapsed patient or in combination with cytarabine, will also be critical to guide therapy.

Erba said that characterizing the patients who achieve complete remission will be important for guiding future research. “We only see a 20% complete remission rate. But in those complete remitters...you can show clearance of the mutation, which has not often been done with other inhibitors.” He predicted that the complete responders would have a simple mutational pro le in which IDH1 or IDH2 is the main driver of the disease, and expressed concern that phase III studies may be unsuccessful if they include patients with more complex mutational profiles. “We may be doomed to failure if only a small percentage of those patients [with IDH mutations] are deriving benefit,” said Erba.Vosaroxin is a first-in-class anticancer quinolone derivative that is minimally metabolized and has activity independent of p53 status. The VALOR trial comparing cytarabine plus vosaroxin with cytarabine alone narrowly missed the primary endpoint of OS (P = .052) in patients with relapsed or refractory AML, although a subset analysis of patients 60 year or older showed a durable improvement in OS.

Erba was skeptical that the positive results in the older subgroup would be sufficient for approval, although he stated that even a small improvement would be beneficial in relapsed or refractory disease. “You can argue that the improvement of survival at 2 and 3 years of about 6% with high- dose [cytarabine] to 13% isn’t much to write home about. However, if you tell a patient that [they’re] twice as likely to be alive 3 years from now, they might actually go for that.”Venetoclax (Venclexta), a BCL-2 inhibitor approved for patients with chronic lymphocytic leukemia with 17p deletion, delivered a modest response rate (19%) as single-agent therapy in a phase II trial10 of patients with relapsed or refractory AML, although the drug did show activity. However, the efficacy of venetoclax was substantially augmented, with a 70% to 75% overall response rate, when combined with 5-azacitidine or decitabine in a phase Ib trial, suggesting that venetoclax could play a role in combination therapies with agents that induce cell death, according to Stone.

Venetoclax combined with hypomethylating agents may also be tolerable for patients 65 years and older, even if they are un t for intensive chemotherapy. Stone summarized a phase Ib/II study that showed venetoclax plus low-dose cytarabine yielded a much higher response rate than would have been expected from low-dose cytarabine alone in patients aged 65 years and older who were ineligible for intensive chemotherapy, further demonstrating its strength as a combination agent.Although many novel therapies are in development, the panelists anticipate that improvements in outcomes will be incremental due to the heterogeneity and polyclonal nature of a disease that has multiple subsets of patients. For example, Stone indicated that researchers have not found ways to target root mutations that drive many AMLs, such as TET2 aberrations.

The panelists agreed that chemotherapy and transplantation will be mainstays of treatment for now, but they believe that the addition of targeted therapies would improve outcomes. “I think the survival curves are going up, not just because of supportive care, but because in fact we understand the disease better and know whom to treat,” said Levis. “I think we are going to continue to push the survival curves up in incremental fashion.”

Moving forward, Stone said that prospective clinical trials are needed to ensure the novel agents are used in the appropriate patients and situations. “We have to be careful about using [new drugs] in a willy-nilly fashion because we might be harming patients, adding to the cost of medical care, and not learning anything,” he said.