Surgical resection remains the key treatment modality for early-stage non–small cell lung cancer; however, both systemic adjuvant and neoadjuvant therapeutics are options that have value for patients. 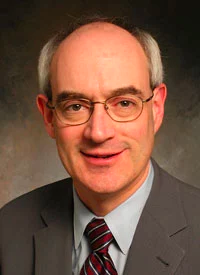 Everett E. Vokes, MD, the John E. Ultmann Professor of Medicine and Radiation Oncology, and physician-in-chief and chair of the Department of Medicine at University of Chicago Medicine

“Adjuvant and neoadjuvant chemotherapy are evidence based,” he said. “There’s much to benefit from, much to offer our patients.”

Vokes serves as the John E. Ultmann Professor, chair of the Department of Medicine, and physician-in-chief at the University of Chicago Medicine and Biological Sciences. He is also the former leader of the Respiratory Committee of the Alliance, previously known as Cancer and Leukemia Group B, and the 2013 Giants of Cancer Care® award winner for head and neck cancer. He delivered the Giants Lecture at the 19th Annual Winter Lung Conference, an event hosted by Physicians’ Education Resource, LLC.

Vokes detailed the use of adjuvant and neoadjuvant immunotherapies in these patients. There are pros and cons to adjuvant therapies, he said. There is no delay of surgery, no risk of disease progression resulting in missing opportunities to use curative surgery, and tumor biomarkers can guide therapeutic decisions. However, patients require longer treatment, there are no intermediate end points, biomarkers are less predictive, and patients must be followed for a long time to detect disease-free survival (DFS) or overall survival (OS).

“This is kind of impressive, and an argument that this should be the standard of care for our patients with PD-L1–positive positive stage II and IIIA disease,” Vokes said.

He noted that preliminary results from the phase 3 KEYNOTE-091 trial (EORTC-1416-LCG/ETOP-8-15-PEARLS; NCT02504372) show that adjuvant treatment with pembrolizumab (Keytruda) led to a statistically significant and clinically meaningful improvement in DFS vs placebo in patients with stage IB/IIIA NSCLC following resection regardless of PD-L1 expression.2

Vokes said that investigators are still awaiting the full report, but KEYNOTE-091 appears to provide a second study supporting the use of adjuvant PD-L1 inhibition in early-stage disease.

“Atezolizumab in my mind is an acceptable standard of care for early-stage disease, PD-L1-positive [that is] stage II and III,” he said, summarizing adjuvant therapy in NSCLC. “This PEARLS trial is positive, but we have got to wait for details. The ANVIL trial, adjuvant nivolumab [Opdivo]…is a cooperative group trial. That has been completed, it's fully accrued, but we don't know the data yet.”

Physicians have successfully used neoadjuvant chemotherapy in breast and head and neck cancer for decades, Vokes noted. Neoadjuvant immunotherapy or targeted therapy can lead to early eradication of micrometastatic disease, guide the choice of or need for adjuvant therapy, and early treatment is better tolerated and induces fewer toxicities. “There's somewhat earlier trial endpoints, not in terms of survival or disease-free survival they take as long as they do for adjuvant therapies to evaluate, but in terms of intermediate markers, biomarkers that we have to define and we are working on that as a field,” he said.

On the flip side, neoadjuvant therapy delays surgery, which could increase the risk for surgical complications. Further, there is an increased risk for disease progression, which could result in missing the opportunity for curative surgery. Vokes said that these are minor concerns, as data show that 90% of patients undergo surgery following neoadjuvant therapy, similar to findings with adjuvant chemotherapy.

“The largest North American trial, the so-called S9900 SWOG intergroup trial that looked at neoadjuvant chemotherapy with carboplatin and [paclitaxel] prior to surgery vs surgery alone,” he said.3 “The trial closed when adjuvant chemotherapy became standard, so it didn't have the needed sample size, but clearly [showed] a trend both for progression-free survival and survival.”

Patients then underwent surgery within 6 weeks after treatment. Following the procedure, they were able to receive adjuvant chemotherapy with or without radiation. They then underwent follow-up.

Eligible patients had an ECOG performance status of 0 or 1 and no known sensitizing EGFR mutations or ALK alterations. Participants were stratified by disease stage (IB/II vs IIIA), PD-L1 expression (≥1% vs <1%), and sex (male vs female).

Compared with chemotherapy alone, nivolumab plus chemotherapy was associated with significant improvement in pathologic complete response (pCR) in the intent-to-treat population (24.0% vs 2.2%; odds ratio, 13.94; 99% CI, 3.49-55.75; P < .0001).4 The addition of nivolumab was also associated with improved pCR at all disease stages (TABLE).5

R0, R1, and R2 rates of resection were found to be comparable irrespective of baseline disease stage in both arms. The median number of lymph nodes dissected also proved to be similar between the arms, at 19.0 (IQR, 12-25) with nivolumab plus chemotherapy and 18.5 (interquartile range [IQR], 10-26) with chemotherapy alone. The length of hospital stay was also comparable irrespective of disease stage at baseline in both arms.

“What about surgery? We’re always concerned, could the patients tolerate it? Well, we look at thoracotomy, we look at minimally invasive surgeries, or minimally invasive [surgeries] that did not work and [patients] then had to be transferred into an open biopsy,” Vokes said. “The larger tumors in particular, if anything, surgery was less invasive. For those who got the chemotherapy…this is not detrimental, neoadjuvant chemotherapy. This is helpful to the patients, and it doesn't impede the work of the surgeon. This clearly shows benefit of neoadjuvant immunotherapy and chemotherapy in resectable non-small cell lung cancer.”