Andrew McKenzie, PhD, discusses biomarkers to test for in breast and lung cancers, the value of multicancer early detection, and how biomarker testing can better direct targeted treatment across solid tumors. 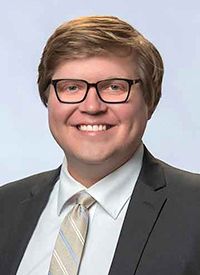 Increasingly sensitive biomarker testing may be the key to earlier and more accurate diagnoses of breast and lung cancer, as methods that look for circulating tumor DNA (ctDNA) and minimal residual disease (MRD) can detect disease before traditional imaging, according to Andrew McKenzie, PhD.

“I had the privilege to talk with doctors Vadlamani, Johnson, and Yardley about best practices for biomarker testing, how to interpret molecular results, some of the current and emerging lung cancer biomarkers and breast cancer biomarkers, and the future directions of biomarker testing in breast and lung cancer. It was a great discussion,” McKenzie said in an interview with OncLive® following an Institutional Perspectives in Cancer (IPC) webinar on precision medicine in breast and lung cancer, which he chaired.

In the interview, McKenzie, vice president of Personalized Medicine at Sarah Cannon Research Institute at Tennessee Oncology in Nashville, discussed key highlights from the meeting, including biomarkers to test for in breast and lung cancers, the value of multicancer early detection (MCED), and how biomarker testing can better direct targeted treatment across solid tumors.

OncLive®: Could you summarize how this IPC event integrated the topics of precision medicine in both breast cancer and lung cancer?

McKenzie: We started by breaking down the basic biology of tumor testing, what analytes are being looked at, and how different companies take advantage of those analytes to detect certain mutations in cancer. We then switched gears to talk about how to take those results and make them actionable. We did a few case reviews that exemplified the complexities of getting these complex genomic testing results done on patients and some of the pitfalls that clinicians can fall into as they interpret them.

Regarding your presentation on interpreting molecular results, what are some future developments in this area to be mindful of?

I rounded out the session by talking about what I see on the horizon for biomarker testing in solid tumors, including breast and lung cancers.

Two [testing methods] I talked about that are booming right now are MCED and MRD. MCED is exactly what it sounds like. It’s a noninvasive blood draw. Companies are figuring out signals inside that blood draw that give a hint for whether cancer is present in [a patient’s] body. These [tests] are typically done in otherwise-healthy individuals who are not symptomatic [and don’t] have any diagnosis or prior diagnosis of cancer.

[This is] the pre-screening phase in detecting cancer. We’re learning that these tests are reliable for detecting small amounts of ctDNA, signatures within the methylome, or other analytes that give you a sense of whether a patient has cancer if they are not otherwise symptomatic. [They can also] specifically tell you what types of cancers these patients might have. This is a robust and ongoing area of investigation.

Secondly, what I see on the horizon is in MRD. MRD testing is another noninvasive blood sample looking for the remnants of tumors in the body. [It looks] at ctDNA, but not specific mutations. Rather, [it looks at] a conglomerate of different mutations or the presence or absence of a biomarker, in general.

A high correlation [has been noted] between the detection of a biomarker or analyte and a patient’s likelihood to progress in the future. This is outperforming the traditional imaging techniques, such that we can predict that a patient will progress far more in advance than we would if just relying on traditional imaging.

Those 2 areas are ones I’m excited about. I have my sights set on them soon being involved in the standard of care for our patients.

Dr Vadlamani gave us a great overview of the current standards in biomarker testing, including what should be done and when it should be done. Importantly, in breast cancer, the traditional hormone receptor [HR] status and HER2 status [tests] should still be performed. She also highlighted the importance of [testing for markers such as] PD-L1 in triple-negative breast cancer.

[Additionally, we should test for] microsatellite instability and tumor mutational burden in breast cancer. Although these happen at relatively low rates, if you come across patients who have these signals, there are therapies, particularly in the immunotherapy space, that you can use.

Dr Vadlamani also talked about the new and emerging area of HER2-low breast cancer. This has a been a paradigm shift for us over the past several months, [causing us to] reconsider how we test for and interpret immunohistochemistry results for HER2 in breast cancer. Thanks to new approvals in that landscape, patients have even greater access to therapies than they did before.

Dr Johnson did a wonderful job talking to us about [the many lung cancer biomarkers], both in first-line metastatic disease and beyond, but also in the adjuvant setting, and how those targeted therapies are moving earlier in care. We heard about the new approvals in EGFR-, exon 20– and HER2-targeted treatment and the exciting work that’s ongoing with agents such as mobocertinib [Exkivity] and amivantamab-vmjw [Rybrevant].

[Dr Johnson also presented] some of the interesting work going on with [fam-trastuzumab deruxtecan-nxki [Enhertu] in HER2-mutant non–small cell lung cancer. Those overviews were incredibly fascinating, and we heard great perspectives on what clinicians do in the clinic to maximize testing for their patients.

We wrapped up with an overview of breast cancer and the studies that have shown biomarkers there, including the ones I spoke about before, but also ones such as PIK3CA. [Dr Yardley highlighted the] new and emerging world of targeted therapies outside the traditional HR status and HER2 status, [and touched on] some interesting spaces in biomarker testing, like MRD. In breast cancer, we are also looking for signals of progression in blood samples [that may appear] prior to what we might see in traditional imaging.