Emerging agents targeting the PD1/PD-L1 pathway and the process of angiogenesis are shaping up to be promising options to break a 30-year drought in new therapies for patients with progressive metastatic urothelial bladder cancer.

Emerging agents targeting the PD1/PD-L1 pathway and the process of angiogenesis are shaping up to be promising options to break a 30-year drought in new therapies for patients with progressive metastatic urothelial bladder cancer.

That was the broad overview that Daniel P. Petrylak, MD, a leading expert in the field, presented during the New York GU™: 9th Annual Interdisciplinary Prostate Cancer Congress® and other Genitourinary Malignancies conference that Physicians’ Education Resource (PER) hosted March 19 in New York City.

Thus far, the development of new therapies to treat patients with bladder cancer has lagged behind other genitourinary malignancies such as prostate cancer and renal cell carcinoma, noted Petrylak, a professor of Medical Oncology and Urology and co-director of the Signal Transduction Research Program at Smilow Cancer Center at Yale University.

Indeed, there are no FDA-approved therapies for patients with metastatic urothelial bladder cancers who relapse on platinum-based chemotherapy, Petrylak said.

He noted that the chemotherapy agent vinflunine, which has been approved in European Union countries as second-line therapy, was among “some flickers on the landscape.” However, he said that the drug resulted a difference in overall survival of about 2.3 months versus best supportive care, which he said could likely be achieved with any of the half-dozen salvage chemotherapy regimens that have been tried over the years.Although bladder cancers have a high rate of mutational complexity, the tumors also exhibit PD-L1 expression, which has sparked investigator interest in exploring checkpoint inhibitors aimed at PD-1/PD-L1 activity. In one study, 45% of patients with primary urothelial carcinoma tested positive for protein ligand PD-L1 expression on ≥5% of cancer cells by immunohistochemistry (IHC) testing.1Atezolizumab (MPDL3280A), a monoclonal antibody directed against PD-L1, is among the most advanced checkpoint agents in this category in terms of clinical development.

The agent previously received a breakthrough therapy designation for PD-L1—positive metastatic bladder cancer. Under the expedited priority review program, the FDA will make its decision by September 12, 2016.

Petrylak reviewed data from the phase II IMvigor 210 study, which forms the basis for atezolizumab’s priority designation. The study enrolled 310 evaluable patients with a median age of 66 years; they received atezolizumab intravenously at 1200 mg on the first day of each 21-cycle until no further clinical benefit was demonstrated.

The site of primary tumor was the bladder for 74% of patients, with metastasis to visceral sites (defined as liver, lung, bone or non-lymph node/soft tissue site) reported for 78% of patients and to the liver in 31% of patients.2 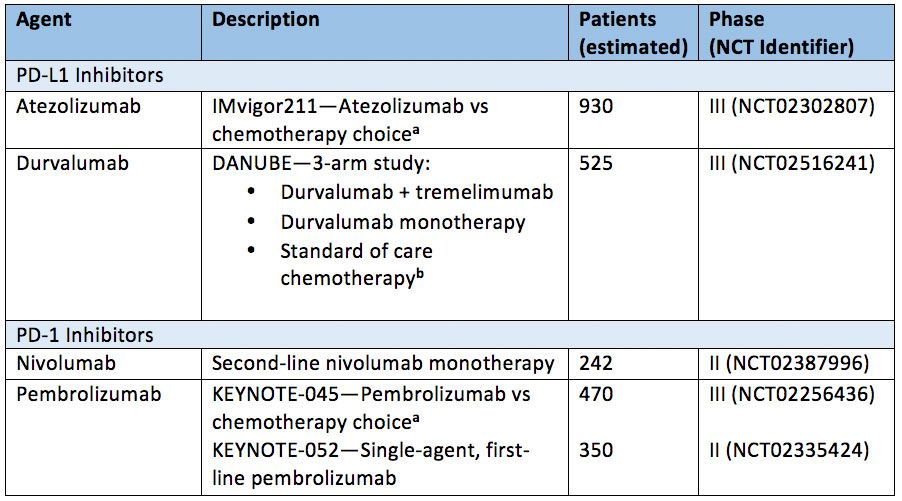 Significant improvements in objective response rates (ORRs) compared with the historical ORR of 10% were seen across all groups, with ORRs increasing with higher PD-L1 expression levels, said Petrylak.

“Higher ORR was associated with higher PD-L1 IHC status, but responses were seen in all PD-L1 subgroups,” said Petrylak. Investigators also noted a reduction in tumor burden associated with PD-L1 status including 46% of patients with tumor assessments, measured by reductions in the sum of the longest diameter.3

Atezolizumab also performed well in the secondary endpoint categories of overall survival (OS) and 12-month OS. After a median 11.7-month follow-up, the median OS was 11.4 months for participants with IC2/3 status, 8.8 months for those in the IC1/2/3 group, and 7.9 months for the entire cohort. The 12-month OS rates for those groups were 48%, 39%, and 36%, respectively, which all compare favorably with approximately 20% in second-line settings.2

The next step for atezolizumab is a phase III study, IMvigor 211, which is comparing the immunotherapy agent with chemotherapy in patients with locally advanced or metastatic urothelial bladder cancer who have progressed on at least one prior platinum-containing regimen (NCT02302807).Pembrolizumab (Keytruda), an anti-PD-1 antibody, has demonstrated dual blockade of PD-L1 and PD-L2 with no cytotoxic activity, said Petrylak.

As part of the phase Ib KEYNOTE-012 study, investigators screened 95 patients with urothelial cancer, and 61 of the patients (64.2%) had tumors that tested positive for PD-L1, defined as PD-L1—positive staining in the stroma or in ≥1 of tumor cells using an IHC assay with the 22C3 antibody.4 Subsequently, 33 of the 61 patients were enrolled in KEYNOTE-012. Petrylak emphasized that “these patients are not selected based on PD-L1 status, they are retrospectively evaluated.”

Pembrolizumab is being explored in urothelial bladder cancer in several later-stage clinical trials. The ongoing phase III KEYNOTE-045 trial is investigating pembrolizumab versus investigator’s choice of either paclitaxel, docetaxel, or vinflunine in an estimated 470 patients with metastatic or locally advanced/unresectable urothelial cancer that has recurred or progressed after platinum-based chemotherapy (NCT02256436).

In the phase II KEYNOTE-052 trial, pembrolizumab is being tested as first-line monotherapy for patients with inoperable metastatic disease who are not eligible for cisplatin-based chemotherapy. The study, which seeks to enroll 350 patients, has ORR as its primary outcome measure (NCT02335424).In November 2015, nivolumab (Opdivo) became the first checkpoint inhibitor approved for the treatment of a genitourinary cancer when the FDA granted an indication as second-line therapy for patients with advanced renal cell carcinoma.

The PD-1 inhibitor is currently being investigated in a phase II study in patients with metastatic or unresectable bladder cancer who have progressed following platinum therapy. The single-arm study, which had an estimate enrollment of approximately 240 patients, has ORR by independent review committee as its primary outcome measure; secondary endpoints include PFS, along with OS and ORR as assessed by investigators (NCT02387996).

Although PD-L1 expression levels were calibrated for all potential participants, Petrylak noted that “patients were not selected based on PD-L1 status.” However, results will be stratified according to whether the patient’s PD-L1 levels are positive, negative, or indeterminate, Petrylak said.Durvalumab (MEDI4736) also was granted breakthrough status as a therapy for patients with PD-L1—positive inoperable or metastatic urothelial bladder cancer following progression on prior treatment with a platinum-based regimen in February 2016.

The designation for the PD-L1 inhibitor was based on early findings from a phase I study that explored the immunotherapy across several solid tumors. Findings from the urothelial bladder cancer arm of the large trial have not yet been released; however, data from the study were submitted for presentation at a future medical meeting, according to AstraZeneca, which is developing the drug.

The phase III DANUBE study, which launched in July 2015, is comparing frontline durvalumab monotherapy against durvalumab plus the CTLA-4 inhibitor tremelimumab or standard of care chemotherapy for patients with metastatic bladder cancer. The primary endpoint of the study, which hopes to enroll 525 participants, is PFS. The estimated primary completion date is November 2017 (NCT02516241).Preclinical work on mice suggests that targeting the vascular endothelial growth factor (VEGF) pathway, a key regulator of tumor angiogenesis, would be an important strategy to pursue in bladder cancer, according to Petrylak. He noted that VEGF receptor-2 (VEGFR-2) is expressed in bladder cancer but not in normal urothelium, thus making the receptor an attractive anticancer target.

Ramucirumab, a VEGFR-2 inhibitor that the FDA has approved in three tumor types, is among the agents targeting angiogenesis to advance in clinical development. In 2015, Petrylak reported results of a three-arm phase II study that evaluated docetaxel with or without ramucirumab or icrucumab, a VEGFR-1—targeting agent, among 139 patients with urothelial transitional cell carcinoma following progression on or after first-line platinum-based therapy.5

As a result, development is moving forward with the phase III RANGE trial in which the combination of ramucirumab plus docetaxel is being compared with docetaxel plus placebo in urothelial cancers in the second-line setting. Investigators hope to enroll approximately 524 patients in the trial, which has PFS as its primary endpoint with OS and ORR among the secondary endpoints (NCT02426125).

“This trial will be used as a registration trial,” said Petrylak. “About one-third of patients fail to respond, so we need other treatments for this disease.”

Other VEGF pathway—targeting agents under study in bladder cancer include bevacizumab (Avastin), which is in phase III development in combination with gemcitabine and cisplatin. Additional drugs in this category are in earlier stages of development.

Meanwhile, another approach that researchers are exploring combines checkpoint immunotherapy with VEGF inhibition. The prospect of combining pembrolizumab with ramucirumab is currently under study, Petrylak said.

“These agents could have synergistic effects,” he said. “VEGF is known to be immunosuppressive, thus giving agents that target VEGF the potential to increase the effect of immunotherapy.”