Obesity increases cancer risk by anywhere from 10% to 300% depending on the type of cancer.1 Obesity is also often associated with a poor prognosis, including higher risk of recurrence. For example, obesity (BMI >30) increases mortality in prostate cancer by about 25%2 and in breast cancer by about 35%.3 Similarly, in colon cancer, the very obese (with a BMI >35) face a 38% greater chance that their cancer will return after treatment.4

Given the current obesity epidemic and an aging population susceptible to cancer, significant efforts are being undertaken to understand the foundations of the obesity-cancer link. Today, we have an emerging picture of how obesity creates a tumorigenic environment through inflammation, altered adipokines, metabolic changes, and reshaping the microbiome.

Obesity increases the abundance of proinflammatory macrophages in adipose tissue, which release cytokines including TNF, IL-6, and IL-1β. These signaling molecules promote a number of cell events that promote tumorigenesis, including survival, proliferation, DNA damage, angiogenesis, and invasiveness. This multitude of procancer effects has led to recognition of inflammation as a fuel that feeds the flame of cancer progression. 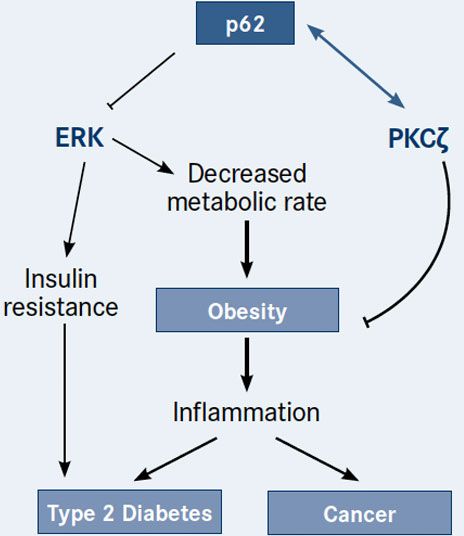 The metabolic changes that follow increased adiposity include hyperinsulinemia and hyperglycemia, both of which favor cancer development. Insulin intrinsically promotes cell growth and inhibits apoptosis. Hyperglycemia enhances glycolysis, increasing energy supplies in tumor cells, and activates a pathway that enables survival despite hypoxia.

Finally, in many obese patients, the consumption of a high fat, low fiber diet alters the gut microbiota, which may worsen metabolic imbalances and enhance inflammation. Studies in mice suggest that these changes affect host gene expression to increase fat storage and intestinal permeability, which exacerbates inflammation by enhancing absorption of endotoxins.

Our laboratory has had a long-term interest in the protein p62. Since our initial discovery of the ubiquitously expressed protein, we have shown that p62 is an adapter that creates protein-protein complexes to produce key cellular signals. Our research so far, summarized here, suggests that p62 may represent a link connecting obesity, inflammation, and progression of certain cancers. By studying p62, we aim to delineate how various signaling pathways are altered in these conditions, which could lead to interventions that break the link and limit cancer risk.p62 plays a key role in controlling metabolism, limiting adiposity and maintaining normal responses to glucose. Loss of p62 leads to enhanced activity of the kinase ERK1, promoting insulin resistance and decreasing metabolic rate.5 The latter effect results from an increase in the ratio of white to brown adipose tissue, favoring fat storage over energy consumption.6

Inactivation of this gene also supports inflammation in adipose tissue via decreased interaction of another kinase, PKCζ, with its targets.5 Adipose inflammation, in turn, further contributes to insulin resistance. These results both highlight the complexity of p62’s function and the overlap of signaling pathways between metabolic disease and cancer; ERK is often overactive in cancer, and PKCζ is a tumor suppressor.In the tumor stroma, p62 suppresses tumorigenesis by modulating metabolism.7 We have shown that p62 levels are reduced in the stroma of several tumors, including prostate, breast, and colon. Further, loss of p62 in the tumor microenvironment or stromal fibroblasts results in increased tumor formation by epithelial prostate cancer cells. The mechanism involves regulation of cellular metabolism through mTORC1, resulting in increased production of inflammatory cytokines, which are required for tumor promotion.

It should be noted that p62 deficiency in cancer cells limits cancer progression. Nonetheless, given its multiple synergistic protumor effects in the stroma, preventing the downregulation of p62 in the stroma may represent a promising therapeutic target for obesity-related cancers.In some cases, p62 may link obesity to cancer even more directly. Periprostatic fat correlates with tumor aggressiveness in patients with prostate cancer (PCa),8 suggesting that adipocytes may have local proinflammatory effects. Presently, we are examining the role of p62 in promoting inflammation in the PCa tumor microenvironment, as well as in adipocyte-PCa cell interactions.

This is just one example of research on the obesity-cancer link. Other critical areas of investigation are focused on the mechanisms whereby obesity-associated changes in insulin signaling, estrogen (in the case of breast and endometrial cancers), and the gut microbiome contribute to cancer progression. As mechanisms vary with tumor site and driving mutations, it may be years before we can apply insights from these studies to the clinic. Nonetheless, deciphering the underlying mechanisms will undoubtedly lead to better tailoring of cancer treatments to each patient. 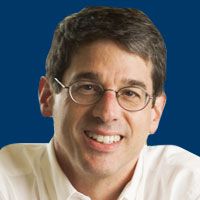