Olverembatinib elicited encouraging responses and tolerability in US patients with ponatinib-resistant chronic myeloid leukemia, Philadelphia chromosome-positive acute lymphoblastic leukemia, and in patients with CML whose tumors have a T315I mutation. 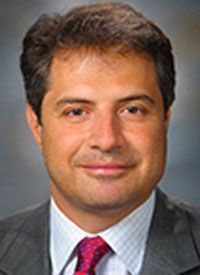 Olverembatinib (HQP1351) elicited encouraging responses and tolerability in US patients with ponatinib (Iclusig)-resistant chronic myeloid leukemia (CML), Philadelphia chromosome (Ph)-positive acute lymphoblastic leukemia (ALL), and in patients with CML whose tumors have a T315I mutation, according to data from a phase 1 trial (NCT04260022) presented at the 2022 ASH Annual Meeting.1

The 2 responders did not have a T315I mutation and had received prior ponatinib.

“Olverembatinib has a favorable pharmacokinetics [PK] profile and will provide similar [data] to what was reported already [with the agent] in a Chinese patient population,” lead study author, Elias Jabbour, MD, a professor of medicine in the Department of Leukemia, Division of Cancer Medicine, at The University of Texas MD Anderson Cancer Center, in Houston, Texas, said in a presentation on the data. “The treatment has been shown to be effective and safe, particularly in patients who had resistance to ponatinib with a T315I mutation.”

The utilization of the novel, third-generation TKI olverembatinib previously provided promising preliminary data, including a favorable safety profile, in a Chinese patient population with CML and Ph-positive ALL.2 These data led to the rationale of this pharmacokinetic-driven, bridging phase 1 trial, which evaluated a similar patient population in the United States.

To be eligible for enrollment, patients aged 18 years or older had either CML-chronic phase (CP), or Ph–positive ALL in accelerated phase or blast phase. Patients must have failed on and been resistant or intolerant to 2 prior BCR-ABL1 inhibitors. Additionally, patients were required to have an ECOG performance score of 0 or 1 and have adequate cardiac, hepatic, and renal function. The phase 1 trial excluded those with CML-CP if they had already achieved a CCyR on previous therapy.

Patients were stratified by leukemia phases and their T315I mutation status at baseline.

“More than half of patients had comorbidities, mainly cardiovascular risk factors that can include dyslipidemia, carotid disease, and obesity, etc.,” Jabbour added.

Pharmacokinetic data showed that was an approximate dose proportional increase in systemic exposure from 30 mg to 50 mg of olverembatinib every other day. These data were aligned with pharmacokinetic findings with the Chinese population, Jabbour said.

Most patients who had previously failed ponatinib for intolerance were able to tolerate olverembatinib, Jabbour explained, adding that 1 patient withdrew from treatment due to an increased infection rate.

Artery occlusive events that were possibly linked to olverembatinib included 1 any-grade angina pectoris at the 40 mg dose level and 1 cardiac failure at the 50 mg dose level.

“The treatment was well tolerated. Although we have seen thrombocytopenia, neutropenia, and leukopenia, these were half the rate of what was reported already in patients in China,” Jabbour said on the rate of AEs in American patients.