Anecdotes of gender inequality and sexual harassment abound among gynecologic oncologists, but until recently, there had been no study to measure the problem in this profession. Findings reported in June 2019 suggesting that high numbers of men and women in this field were subject to sexual harassment were no surprise to investigators. Instead, they have strengthened national gender discrimination and sexual harassment reform efforts in oncologic gynecology. 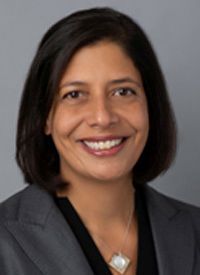 Anecdotes of gender inequality and sexual harassment abound among gynecologic oncologists, but until recently, there had been no study to measure the problem in this profession. Findings reported in June 2019 suggesting that high numbers of men and women in this field were subject to sexual harassment were no surprise to investigators.1 Instead, they have strengthened national gender discrimination and sexual harassment reform efforts in oncologic gynecology.

Across the nation, there has been a spotlight on sexual harassment because of movements such as #MeToo, but some physicians believe that gynecologic oncology is more troubled in this regard than other sectors of the American workplace. In obstetrics and gynecology, female physicians comprise roughly 60% of the workforce but have a disproportionately low share of academic and managerial positions.1-3 Their pay lags well behind compensation for men, and concerns about sexual harassment on the job are high (Figure).1

“Sometimes, people think that because there are high numbers of women in the field, that the women in the field don’t necessarily experience sexual harassment or gender bias”; however, this isn’t true, said Sarah M. Temkin, MD, director of Gynecologic Oncology at Anne Arundel Medical Center in Annapolis, Maryland.

An unexpected finding in the SGO membership study was that more than half of the male respondents (51%; n = 75) had experienced sexual harassment in training or practice, according to Temkin and first author Marina Stasenko, MD. “This was probably the most surprising result of the study,” said Stasenko, a clinical fellow in gynecologic oncology at Memorial Sloan Kettering Cancer Center in New York, New York.

The study findings may have been distorted somewhat by selection bias, Stasenko cautioned. The survey was sent to all 1566 SGO members in the United States and participation was voluntary (402 responses). However, prior studies have also produced evidence that male gynecologists are harassed, including an investigation published recently in the Journal of Minimally Invasive Gynecology.4

According to the study, sexual harassment took the form of superiors and coworkers trying to establish sexual relationships, subtle bribes for sex, negative consequences for refusing to engage in sexual activity, and unwanted physical contact. Instances of sexual assault were also reported. 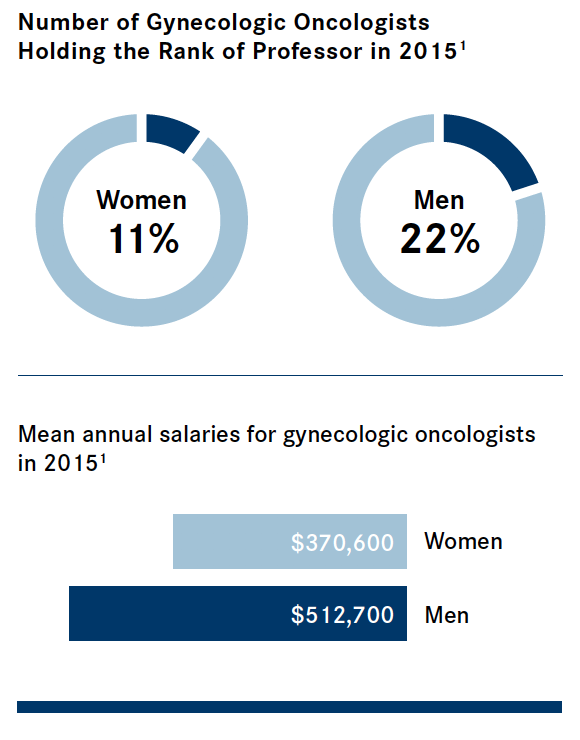 Across oncology subspecialties, there are no comparative statistics for sexual harassment, said Vivian E. von Gruenigen, MD, CPE, a gynecologic oncologist and chief medical officer of University Hospitals Minoff Health Center in Beachwood, Ohio. “That’s why this type of research is important—to obtain data to develop change and action plans,” she said.

Issues of gender discrimination and sexual harassment also are of concern in gynecologic oncology communities in Europe. The prevalence of women serving as oncologists in Europe may exceed that of women in the United States. Female membership of the European Society for Medical Oncology (ESMO) was 40.5% in 2016, up from 24.9% in 2004; and in 2017, 52.9% of young oncologist members of ESMO were women. In 2016, 37% of members of ASCO were women.5

Investigators said that a significant number of women participating in the survey had experienced sexual harassment in the workplace in the form of unwanted sexual comments or behavior by supervisors and colleagues, which authors of the report described as being of great concern. In the survey, 37.7% of participants had encountered unwanted sexual comments by a superior or colleague.5

The issue of men predominating in leadership positions in gynecologic oncology is also of concern in the United States, according to Temkin. Although 51% of gynecologic oncologists are women,1 they still report to predominantly male department and cancer center leaders. In National Cancer Institute centers, 85% have male directors, and 72% to 80% of obstetrics-gynecology departments have men serving as chairs, according to informal research by Temkin. Of the SGO’s 70 presidents to date, only 5 were women.6 “Women are underrepresented in gynecology and obstetrics leadership,” Temkin said. “When you have women in the majority in a subfield with disproportionately male leadership, you’re still exposed to gender bias, which can lead to an environment tolerant of sexual harassment.”

There is a need for more female role models in medicine today, Temkin said. “I never had a female surgeon train me. I can only think of 1 female surgeon I knew as a medical student.” Conditions have improved, she added. “There’s not a woman training today in gynecologic oncology who doesn’t have a female faculty member.” 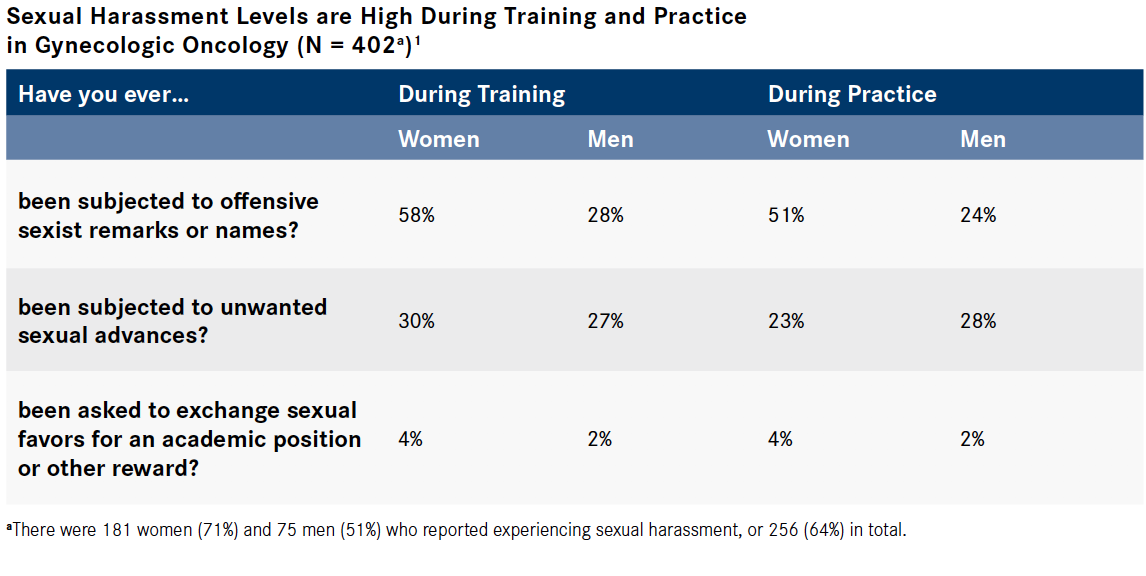 However, gender discrimination and sexual harassment are of serious concern for gynecologic oncologists of all ages.

“As women, we have all exchanged stories in social settings and helped support each other through difficult situations,” Stasenko said. “We wanted to take those informal conversations and get a real sense of the landscape in gynecologic oncology. Our hope is that in [investigating the issue], we will fuel a larger and more open conversation and inspire action within local gynecologic oncology practices, as well as within the oncology community at large.”

Considering the proportion of men who report harassment, there is a need for caution in concluding from what direction harassment might be coming. Investigators note that there are levels of same-sex harassment in the profession. “We hope that with an increasing number of female physicians entering the field, sexual harassment and gender disparities will be of a diminishing concern; but without knowledge of who is doing the harassment, we cannot speculate on what the future will hold as our field becomes more female-dominated,” Stasenko said.

Temkin agreed that women also demonstrate gender bias and sexually harass other women. “We have a lot of innate biases about gender, and the hospital is a mostly female environment.” In a specialty where physicians are predominantly female, the leadership is mostly male, and the staff are mostly women. It takes an extra step to consider women having gender biases and recognize instances of sexual harassment by women against women, she said.

Partly because of the attention that sexual harassment has received, conditions in the gynecologic oncology workplace have ameliorated, von Gruenigen said. “I’ve seen an improvement over my decades working within the healthcare system. We are improving but we’re not where we need to be.”

Some medical societies have created statements of conduct. The American Medical Association has published a code of ethics opinion against sexual harassment and has developed an educational program on physician boundaries. Also, the American Medical Association has developed further resources to educate physicians on the impact of their words and actions. The Joint Commission’s code of conduct expressly describes a no-tolerance policy toward sexual harassment.

The SGO has yet to fully define its stance on sexual harassment, von Gruenigen said. “We’re not where we want to be. We’re actively engaged in improving how we apply ethics to our patients and how we relate to each other.”

Society sets the expectations, but to a large extent, individual healthcare organizations govern what happens inside hospital or clinic walls. Leaders must be willing to have difficult discussions. “Being a physician leader in healthcare, you need to be comfortable talking about this issue,” von Gruenigen said. The more it’s discussed, the more change can happen. But studies and articles about sexual harassment and gender bias in medicine create transparency and facilitate change, she said. “It supports respectful and equal culture.”

The #MeToo medicine discussion and #ILookLikeaSurgeon campaign, which was started to challenge gender bias, have changed conversations inside surgery departments. “When I talk to my colleagues and friends who are surgeons, they are all very aware of gender bias and how it impacts their careers,” Temkin said.

Temkin said she knows of surgical departments with grand rounds on gender bias. Surgery departments have a higher percentage of male physicians than in obstetrics-gynecology departments, but surgery departments tend to discuss gender bias more frequently, Temkin said. This is because in obstetrics-gynecology, “we’re less open about feeling gender bias, perhaps because we have a critical mass of women in the field and are surrounded by women all day,” she said. “It takes stepping back and thinking about the power dynamics related to gender to make you aware that you may be experiencing gender bias or sexual harassment when it comes from other women.”

Healthcare organizations ought to embrace education on these issues, through symposiums or structured lunches or other means, von Gruenigen said. The training should be ongoing and encompass bias training and pay transparency, with the goal of changing behavior, Temkin added. Improving diversity in leadership can help, too. “I think that gender bias and sexual harassment don’t necessarily come from above, but having a more diverse leadership would potentially change the culture such that they’re less tolerated,” Temkin said.

Von Gruenigen’s healthcare system has the motto, “Speak up, speak out.” It relates to safety, but it’s applicable to sexual harassment, too. “If people are not safe in their work space, then not only are employees not safe, patients are not safe,” she said.

Because the field of gynecologic oncology is small, it is difficult for oncologists to report harassment. The SGO has just 2000 members in the United States and abroad. “Gynecologic oncology is a small field where everybody knows everybody else,” Temkin said. That closeness can make it awkward to report a problem. Although 91% of doctors in the SGO study acknowledged their workplaces have policies for reporting harassment, harassment was reported by just 14.5% of those who experienced it.1