Ajai Chari, MD, reviews the takeaways from the PLEIADES trial and its comparability with the CANDOR trial, and how a subcutaneous formulation of a daratumumab combination became a pivotal player in the treatment enhancement for patients with relapsed or refractory multiple myeloma. 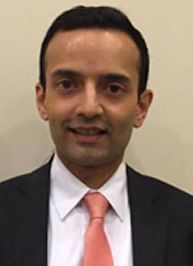 Based on data from the phase 2 PLEIADES trial (NCT03412565), the FDA has approved daratumumab and hyaluronidase-fihj (Darzalex Faspro) plus carfilzomib (Kyprolis) and dexamethasone (Kd) for the treatment of adult patients with relapsed or refractory multiple myeloma who have received 1 to 3 prior lines of therapy.1

Investigators reported that response rates with the subcutaneous formulation of daratumumab plus Kd in PLEIADES were similar to those with intravenous (IV) daratumumab (Darzalex) plus Kd observed in the phase 3 CANDOR trial (NCT03158688). Distinctively, in a single-arm cohort of 66 patients in the PLEIADES study, the novel regimen elicited an 84.8% (95% CI, 73.9%-92.5%) overall response rate and a 77.3% very good partial response or better at a median follow-up of 9.2 months. The median duration of response with the regimen had not yet been reached. An estimated 85.2% of patients (95% CI, 72.5%-92.3%) continued to respond to treatment for at least 6 months and an estimated 82.5% of patients (95% CI, 68.9%-90.6%) maintained a response for at least 9 months.2

In an interview with OncologyLive®, Ajai Chari, MD, reviewed the takeaways from the PLEIADES trial and its comparability with the CANDOR trial, and how a subcutaneous formulation of a daratumumab combination became a pivotal player in the treatment enhancement for this patient population. Chari is a professor of medicine at Icahn School of Medicine at Mount Sinai in New York, New York.

Describe the rationale for PLEIADES and how the importance of identifying an efficacious subcutaneous formulation of a daratumumab combination played into this.

One of the most important additions to our arsenal for myeloma [was daratumumab, which] was initially approved in 2015 as a monotherapy but quickly moved throughout the myeloma continuum in combination with many other agents: [IV] daratumumab was approved with bortezomib [Velcade], lenalidomide [Revlimid], and pomalidomide [Pomalyst]. Subsequently, the arrival of subcutaneous daratumumab is a game changer because [it has] comparable efficacy with a much shorter infusion time. Median infusion time can be 6 to 8 hours, and [the subcutaneous treatment] is 3 to 5 minutes, which is particularly important in the era of COVID-19 to minimize exposure for both patients and hospital workers.

It’s much more convenient, [shows] comparable efficacy, and is safer—free of high-grade infusion reactions. [Subcutaneous daratumumab] has been approved in combination with bortezomib, lenalidomide, and pomalidomide. We didn’t have the combination of [subcutaneous daratumumab plus] carfilzomib approved and that’s what is important about this update.

What were the key takeaways from the analysis of PLEIADES?

In 2022 and beyond, I don’t see the role for IV daratumumab anymore. When you have such an efficacious, convenient, and well-tolerated agent—first and foremost for the patients but also for our nurses and pharmacists—it makes sense to be using subcutaneous daratumumab.

The PLEIADES study follow-up is much shorter [with] a medium follow-up of only 9.2 months, and the response rate was 85%. In the [CANDOR] study, [for] which we just got an update [published in Lancet Oncology], we have much more mature follow-up of approximately 28 months. The [median] PFS was 28.6 months in the triplet arm [daratumumab plus Kd] vs 15.2 months in the control arm.

Now that we have the subcutaneous formulation approved, it’s even better because [we] can deliver carfilzomib and Kd with subcutaneous daratumumab and get these impressive PFS results.

What adverse effects should clinicians be aware of when prescribing subcutaneous daratumumab plus Kd?

The adverse [effect] profile is [consistent with] what you see with each individual monotherapy. Subcutaneous daratumumab showed relatively low rates of infusion-related reactions—less than 10%. With carfilzomib, you usually have to watch out for dose-related hypertension, dyspnea, and thrombocytopenia. And then, of course, for Kd we are familiar with [the safety profile]. There is nothing new from this combination to worry about.

For both patients and clinicians, what are the advantages and disadvantages of dosing or using IV to administer daratumumab?

It’s a drug [that is convenient for] patients because efficacy is comparable, and pharmacokinetics favors subcutaneous daratumumab because when you go to monthly daratumumab you have a slightly higher trough level of the drug. The safety profile is better because of lower rates of infusion-related reactions.

Convenience is hard to beat; it’s 3 to 5 minutes and also a lot less volume. You’re not giving a large volume of fluid to patients, which, especially with carfilzomib, is important because we know that carfilzomib increases hypertension. We certainly don’t want to be adding fluids to these patients continuously. To be able to give the drug subcutaneously is much better; it makes better sense.

What does the future hold for patients beyond subcutaneous daratumumab plus Kd? 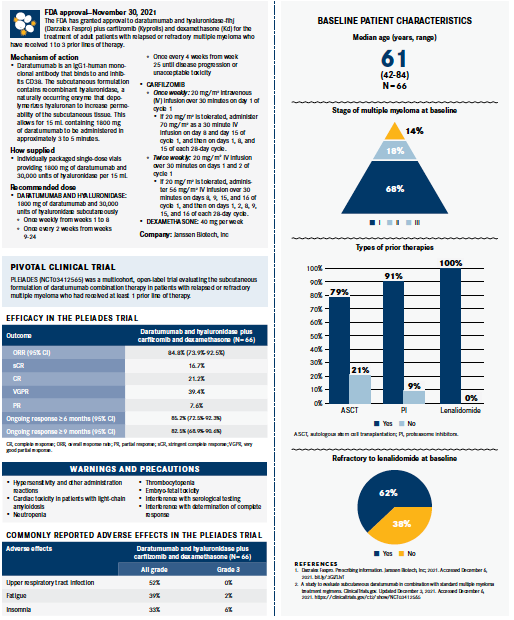