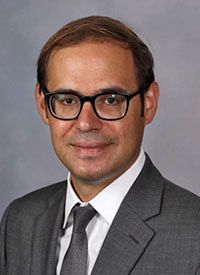 Anastasios Dimou, MD, a medical oncologist at the Mayo Clinic

The treatment options for patients with lung cancer and actionable mutations, particularly those with rarer mutations, have greatly expanded in the past few years, explained Anastasios Dimou, MD.

When patients are diagnosed, Dimou recommends performing molecular testing immediately, both in the form of tissue and liquid biopsies, to see the biomarkers a patient has. This information informs him on the next steps of treatment.

“All of those actionable mutations beyond EGFR are rare individually but not as rare collectively. I recommend comprehensive testing at diagnosis. At the time of progression, I always try to get a tissue biopsy as well as liquid biopsy,” said Dimou. “I take into account a number of factors, including presence of disease in the central nervous system (CNS), whether we have a known mechanism of resistance, and whether that mechanism of resistance depends on the targeted oncogene or possibly a bypass pathway activation in order to make our best move to a different TKI, chemotherapy, or some other reasonably designed clinical trial.”

In an interview during the 2020 OncLive® State of the Science Summit™ on Lung Cancer, Dimou, a medical oncologist at the Mayo Clinic, discussed available and emerging treatment options and approaches for patients with oncogenic-driven lung cancer.

OncLive: Could you talk about the efficacy of dabrafenib (Tafinlar) plus trametinib (Mekinist) in patients with BRAF V600E—positive lung cancer?

Dimou: The phase II clinical trial looking at dabrafenib plus trametinib in patients with BRAF V600E—positive lung cancer included 36 patients and reported a response rate of 64%, which is what we've seen with other targeted agents in lung cancer. These responses were durable with median progression-free survival (PFS) and median duration response of over a year, establishing the combination as a standard treatment for these patients. The study was done in previously untreated patients who had not received chemotherapy or immunotherapy previously.

Are other options being explored for patients with BRAF V600E mutations?

Other possibilities for treatment for this patient population would include standard-of-care chemotherapy and immunotherapy. Interestingly, for patients with BRAF-mutated lung cancer, the responses to immunotherapy as monotherapy are similar to the general lung cancer population, which is something that we have not seen for other oncogenic-defined groups in lung cancer.

What is being done when patients develop resistance?

In patients with lung cancer, there is little data to look into that question, but we're going to see that data soon as those patients develop resistance after this combination is used more. We have data from patients with melanoma who have the same mutation and are treated with BRAF-directed therapy. In those patients at the time of progression, there are secondary resistance mechanisms that might include upstream receptor tyrosine kinase activation or reactivation of the MEK kinase pathway with secondary mutations in the members of this pathway, or even activation of the PI3K pathway that can crosstalk with a MEK kinase pathway. It commonly occurs in secondary resistance with targeted agents in other groups. There is a proportion of patients where no mechanism of resistance is identified despite our best efforts. Now, in patients with lung cancer, there have been some very limited case series reported that show the same pattern.

Could you speak to the potential of entrectinib (Rozlytrek) and larotrectinib (Vitrakvi) to penetrate the CNS in patients with NTRK fusions?

Both agents are designed to penetrate the CNS. In the clinical trials with entrectinib, there were responses in the CNS reported. There are no such data on larotrectinib yet. With regards to deciding which agent to choose, I base my decision mostly on the on the toxicity profile of those drugs. If a symptomatic patient has brain metastases, I would not treat that with a TKI but mostly with radiation. However, if we're dealing with controlled asymptomatic metastasis, a CNS penetrative TKI, like entrectinib or larotrectinib, might be a good option.

What is the current treatment status for patients with RET fusions?

The basis comes with drugs that are already approved for other cancers and can be prescribed off label, but there are also trial data in RET fusion—positive lung cancer. Cabozantinib (Cabometyx) has a response rate of about 30% for patients with fusion-positive lung cancer. Newer data with TKIs in clinical development include BLU-667 (pralsetinib) as well as LOXO-292 (selpercatinib) and these 2 drugs show response rates close to 60% and have penetration through the blood-brain barrier and activity in the CNS. They are not approved yet, but we're excited to see those data coming, hopefully [hopefully leading to] the drugs getting approved to be able to offer those to patients, even outside the context of clinical trials.

Could you give an overview of the PROFILE 1001 trial examining patients with MET exon 14 alterations?

This trial included patients with MET exon 14 mutations that a number of diverse mutations share in common, the skipping of exon 14 most of the time, and they can be either short deletions, longer deletions, or point mutations. That skipping of exon 14 activates MET and makes it the primary driver oncogene for those tumors. The trial showed a response rate of close to 30%. That is a very robust result that makes crizotinib (Xalkori) a good option for this patient population. The response rates are usually higher with other targeted therapies in other oncogene driven subsets within lung cancer. Further, crizotinib is a drug that does not have CNS penetration. The reasons behind why crizotinib does not work that well are not very clear. It could be a matter of the biology of those tumors, or a matter of the side effect profile. This trial established crizotinib as an option for elderly patients with the MET exon 14 skipping mutation subset of lung cancer.

There are other MET inhibitors in clinical development, which we'll see eventually. For some of them, we've already seen results that have been reported in the last year, but there's more to come.

What progress has been made in ALK fusions?

The biggest advances over the past couple of years have been that change in our first-line choice from crizotinib to the newer generation TKIs alectinib the brigatinib. After, we can use lorlatinib or some other agent as the second or subsequent line.

What research is being done to further understand the role of tumor mutational burden (TMB) in lung cancer?

There's no doubt that the higher TMB correlates with better benefit from immune checkpoint inhibitors and that has been shown across different types of tumors; however, there are some technical and biological limitations that have halted the clinical development of TMB as a biomarker. Technical limitations include the number of genes in targeted panels might differ from panel to panel and might affect the TMB calculation. Preanalytical factors, like fixation of tissue, might affect another technical issue. There are different cutoffs, but there are also biological considerations, meaning that the TMB would look only at one side of the equation of antigen presentation, which is the mutation that has the potential of generating a new antigen.

There is also the other side of the equation which is the ability of the immune system to recognize this mutated protein as non-self and eliminated. That largely depends on the human leukocyte antigen that is very frequently lost in patients with lung cancer. Tumors that have loss of heterozygosity for human leukocyte antigen are known to have high TMB, but those would be defective in presenting those antigens and would not be expected to respond to the manipulation of the checkpoints with inhibitors.

What is your advice for patients who progress?

My personal approach is to rebiopsy, if we can, either with a tissue biopsy, liquid biopsy, or both. There are a number of factors that are considered when choosing a patient’s next line of therapy. First, whether we're dealing with oligoprogression where I would consider a local approach like radiation and staying the course with the same TKI. I take into consideration whether comprehensive retesting with a rebiopsy would identify mechanisms of resistance, and whether that mechanism of resistance is target oncogene dependent or independent.

The other factor to take into consideration is whether we're dealing with progression in the brain or with disease in the brain, where we might want to use a CNS penetrant TKI. For example, for a patient where I have identified the mechanism of resistance that they have good data that a different TKI might work, I might choose that different TKI over, for example, chemotherapy. If we have an unknown mechanism of resistance and the patient might have been treated with many lines of prior TKI, it is likely that there is development of a bypass mechanisms of resistance that that will be better treated with chemotherapy. Meanwhile, if that bypass mechanism is known, such as a patient who expresses MET, I would include a MET inhibitor like crizotinib in my next approach. It's very case specific but there are some factors to take into consideration when making that decision.