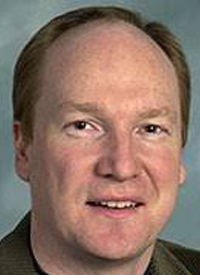 Goetz H. Kloecker, MD, MBA, MSPH, FACP
Plinabulin, an antineoplastic agent that activates an immune response, is being investigated as a treatment option for patients with advanced or metastatic non-small cell lung cancer (NSCLC) who have progressed after standard-of-care therapy. The drug is being tested in combination with docetaxel in the phase III DUBLIN-3 trial for patients receiving second- or third-line chemotherapy (NCT02504489).


Investigators are seeking to significantly improve survival for a patient population with a particularly poor prognosis. Despite the introduction of tyrosine kinase inhibitors and PD-1–targeting immunotherapy, many patients in this disease setting are treated with docetaxel alone. The median survival for patients who are treated with chemotherapy alone is about 7 to 8 months, according to Goetz H. Kloecker, MD, MBA, MSPH, FACP, associate professor of medicine and director of the Thoracic Oncology Clinic at the University of Louisville James Graham Brown Cancer Center in Kentucky.

Kloecker, who is the principal investigator for the trial at the University of Louisville, said the addition of plinabulin to standard chemotherapy has improved outcomes compared with docetaxel alone in initial studies. “Overall survival [OS] and progression-free survival [PFS] was significantly improved, and significant for lung cancer means the median survival was improved by more than 2 months.”