Von Hoff's Quest Is for a Cure in Pancreatic Cancer

Daniel D. Von Hoff, MD, is focused on developing more targeted therapies for those with pancreatic and other advanced cancers. 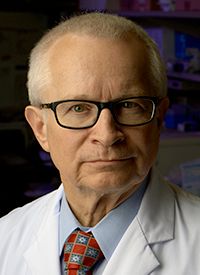 It was the unfamiliar, umbrella-shaped leaf of the gingko biloba tree that taught Daniel D. Von Hoff, MD, a lesson—one that would help shape the course of his career as a top pancreatic cancer researcher. As a biology undergraduate at what was then Carroll College, Von Hoff studied with Professor Roy Christoph, who led the class outside to study vein patterns and other qualities of the trees dotting the Waukesha, Wisconsin, campus. “He demanded excellence, and he taught observation,” said Von Hoff, now 70 years old and physician in chief at Translational Genomics Research Institute (TGen) in Phoenix, Arizona.

When it came time to show what he learned about the material, Von Hoff found a gingko leaf on his test that hadn’t been introduced during the semester. Afterward, Von Hoff asked Christoph, whom he later called one of his greatest mentors, about the wild-card question.

“What you have to learn is the method, not just observation,” Christoph told Von Hoff. With its specific vein pattern, the professor had wanted his students to use their information and apply it accordingly. “It’s important to turn that knowledge into other situations you’re not familiar with,” Von Hoff said. It’s a concept that has served him well at TGen and throughout his career as a cancer researcher, physician, and mentor.

Von Hoff has been instrumental in the development of 3 clinical regimens for drugs that have improved survival for patients with advanced pancreatic cancers: gemcitabine, nab-paclitaxel (Abraxane), and irinotecan liposome injection (Onivyde). He and his colleagues have also helped to bring other cancer drugs to patients such as mitoxantrone, fludarabine, docetaxel, irinotecan, nelarabine, capecitabine, lapatinib, vismodegib, and others.

Von Hoff is focused on developing more targeted therapies for those with pancreatic and other advanced cancers. In October, Stand Up To Cancer (SU2C) awarded a $2.5 million grant to a TGen team headed by Von Hoff to develop a pancreatic cancer clinical trial that will test the novel combination of pembrolizumab (Keytruda), an anti-PD-1 immunotherapy, and paricalcitol, a vitamin D receptor agonist. He also was part of SU2C Dream Team grant winners in 2009 and 2015.

In addition to his role at TGen, Von Hoff is a professor of medicine at Mayo Clinic, the Virginia G. Piper Distinguished Chair for Innovative Cancer Research and chief scientific officer for HonorHealth’s Clinical Research Institute, medical director of research at McKesson Specialty Health, and scientific medical officer at US Oncology Research.

He is widely published, with more than 650 papers, 140 book chapters, and 1080 abstracts. He also has won the 2010 David A. Karnofsky Memorial Award from the American Society of Clinical Oncology (ASCO) for his contributions to the field, is a past president of the American Association for Cancer Research (AACR), and is a past member of a presidential National Cancer Advisory Board from 2004 to 2010, among other accolades.Throughout his career, the powers of observation have helped guide Von Hoff. Although he initially planned to focus on infectious disease, his first rotation as an intern in medicine at the University of California, San Francisco, was oncology—and it took him in a new direction.

“I really liked it because I was glad to be taking care of people who were really sick,” he said. “On that unit, I had great teachers and nurses who were so supportive—they were so glad to try to help and take care of people, not just take care of the rotation.” Working with patients with cancer in the early 1970s also helped him hone his guiding philosophy: To cure sometimes, to relieve often, and to comfort always.

“There is always something you can do to help someone,” he said. “Even just sitting there and telling the person what is known. Your responsibility is just to listen to that person because they will tell you what is wrong and what they need. If you do that, you will be helpful. It’s all in there; just tune out everything else. You learn from books, but you also learn at the bedside.”

Learning from esteemed experts has been another hallmark of Von Hoff’s career, and his appreciation for doing so began early on, at home. As the oldest of 5 children, Von Hoff was raised in Oshkosh and De Pere, Wisconsin, by his father Stanley, a bricklayer, and his mother, MaryAnna, a nurse’s aide and accountant. “My greatest mentors were my mother and father; they taught me all about hard work, energy, and curiosity,” he said.

Sharing Knowledge on a Larger Scale

MaryAnna set the pattern: One of Von Hoff’s earliest memories is sitting on her lap, listening to her read Aesop’s fables each day. In his mid-90s, Stanley was still cutting his neighbor’s lawn and growing vegetables. Just as his father had apprentices, so, too, did Von Hoff, who has taught what he knows to those who came up after him. Von Hoff shows immense gratitude for the many people he has learned from, as well as the many he’s had the opportunity to mentor. His curriculum vitae spans 200 pages, including committees, societies, and honors, as well as the postdoctoral candidates he has mentored.

His biggest accomplishment, he said, has been the establishment of the AACR-ASCO Methods in Clinical Cancer Research course, a collaboration between the 2 societies. The workshop, which takes place in Vail, Colorado, is a weeklong bootcamp that’s become a way for Von Hoff to give back to the lifelong mentoring he has considered an integral part of his career. The website describes the course as “an intensive workshop in the essentials of effective clinical trial designs of therapeutic interventions in the treatment of cancer for clinical fellow and junior faculty clinical researchers in all oncology subspecialties, including radiation, surgical oncology, and medical oncology.”

Von Hoff established the course along with Charles A. Coltman Jr, MD, then president of ASCO, and Gary M. Clark, PhD, a biostatistician then based in San Antonio, more than 2 decades ago. “The whole idea was to give that mentoring in a concentrated, isolated place,” said Von Hoff. “People still ask for advice from each other, even after 21 years. It’s lifelong mentoring.”

Working on the Railroad

The rest of the year, Von Hoff spends about a third of his time working on new cancer agents, a third of his time working with patients, and the last third working on clinical trial efforts to test new oncology drugs. TGen serves as the science base where his laboratory is located; his teams at the HonorHealth healthcare system and US Oncology Research focus on new agents in phase I early clinical trials. Such work on new oncology medications, he said, has helped “make a little dent to increase survival. They’ve been small advances against a very tough disease.”Von Hoff’s earliest occupational aspirations were working on the railroad in the late 1960s in his high school job. “I was a gandy dancer, which was the name for someone who put in rail and laid track,” he said. “I put in track for the [central Wisconsin] Green Bay and Western Railroads, and I loved it.” Working like both his grandfathers did on the railroad, Von Hoff said he learned from men who had worked in the field for 40 years before him. “I learned a lot from these men. They were good teachers,” he said.

Facing Cancer in the Future

Today, Von Hoff is a model train enthusiast and says he’d either run a model train shop or work as a train engineer if he couldn’t be a physician. Beyond the oncology world, he keeps things on track by maintaining close connections with his family. He and his wife, Ann, have been married for 44 years and live in the Scottsdale, Arizona area. “My wife tolerates the trains,” he said. “Her hobby has always been children and grandchildren and finding clothes for the babies.” Together, Von Hoff and Ann have 3 children and 8 grandchildren, aged 2 to 13 years. When the family comes to visit, they can watch their grandfather’s model railroads (“I build structures, work on the track, and clean the cars,” he said), but they can’t touch them too much. “I provide other trains for them to play with and break a little bit,” he said. “I’m not crazy.”Von Hoff believes the answer to fully curing pancreatic and other cancers is out there—it just needs to be identified. Thyroid cancer progresses from the thyroid to the neck’s lymph nodes and then the bone, he said. With pancreatic cancer, though, it always progresses to the liver.

“It’s a new concept,” he said. “Pancreatic cancer is to a tissue regeneration program like a wound that doesn’t heal. The repair gets out of hand. It is a program that has been ‘hacked’ into that controls the whole environment of the tumor. We should be able to find where that program error occurred. We think there’s a vulnerability that we are trying to find. It’s complicated, but there has to be a key that turns it to be normal and shuts the tumor down.”

Identifying that vulnerability may lie in the greater use of imaging, which could help pave the way to diagnosing cancers more quickly and treating them earlier, he said. “We need a mammogram for pancreatic cancer,” he said. Such imaging can help physicians better understand the microenvironment so there can be more of an emphasis on cancer interception and, eventually, its eradication. “We want to cure the damn disease,” he said.