Although the ability to treat head and neck cancer has certainly improved over the years, a significant percentage of patients experience recurrent disease after initial treatment. 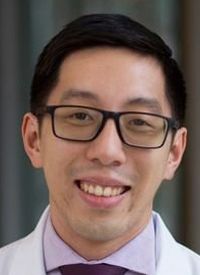 Head and neck cancers represent a wide-ranging category of diseases, and the sixth most common cancer in the United States. More than two-thirds of patients who receive an initial diagnosis of head and neck cancer already have a malignancy that has progressed to an advanced stage requiring a multimodality approach to care that includes radiation and chemotherapy. Although the ability to treat head and neck cancer has certainly improved over the years, a significant percentage of patients experience recurrent disease after initial treatment. The challenge and promise in advancing treatment in head and neck cancer lies in a better characterization of at-risk patients and understanding of how cancers recur.

Multiple clinical risk factors have been used for their potential prognostic value of head and neck cancers; however, their use has not been clearly defined in identifying mechanisms of treatment resistance for the subset of patients who fail initial therapy. Moreover, the promise of genetic-based risk stratification in the era of parallel sequencing has yet to be realized.

At its core, cancer is a genetic disease. Every cell in the body is controlled by a series of instructions encoded in genes. Occasionally, mutations override the normal safety checks and lead to uncontrolled cell growth and proliferation, which in turn leads to cancer. By harnessing genetic differences, our team of investigators at Montefiore Health System and the National Cancer Institute–designated Albert Einstein Cancer Center in the Bronx, New York, developed a prognostic genetic risk score to identify which patients are at highest risk for disease recurrence.

The development of a genomic prognostic tool resulted from a collaboration with a team that comprised Chandan Guha, PhD, MBBS, director of the Albert Einstein College of Medicine Institute for Onco-Physics, and a professor and vice chair of the Department of Radiation Oncology; Michael B. Prystowsky, MD, PhD, a professor and chair of the Department of Pathology; and Thomas Ow, MD, an associate professor of otolarhinolaryngology and pathology. To assess which patients with locally advanced disease were at greatest risk, the investigators identified cases from The Cancer Genome Atlas, a landmark cancer genomics program that molecularly characterized more than 20,000 primary cancers, including cancers of the head and neck. Twenty-four cases with distant metastases—tumor cells which have broken away from the primary tumor and traveled to other areas of the body—and 48 matched nonmetastatic controls were selected. A total of 1100 genes were differentially expressed, with primary changes in epithelial-stromal remodeling, and cytokine-immune interactions on functional pathway analysis.

The score was validated in an internal prospective multidepartmental study that comprised more than 120 patients treated at Montefiore. Results showed that patients with a high-risk score had significantly shorter distant metastasis-free survival (HR, 9.0; 95% CI, 2.6-31.7; P < .0001; Figure). The risk score was superior to tumor and nodal stage for distant metastatic prognostication and remained significant after multivariate adjustment. The genetic score had improved predictive value for distant treatment failure in an elevated risk subgroup of cancers negative for human papillomavirus, an increasingly prevalent cause of head and neck cancer among nonsmokers (HR, 20.8; 95% CI, 2.6-166; P = .004). 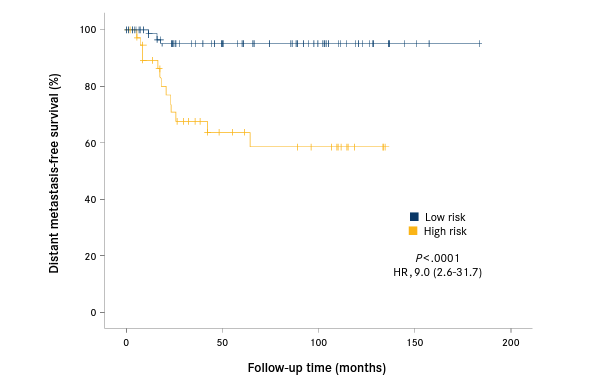 Gene expression from cancer samples are calculated as an average of admixed cellular genetics profiles of not only cancer cells, but also immune cells and supportive tissues. To get a better grasp of what is actually occurring within the tumor microenvironment, investigators applied single- cell RNA sequencing to approximate the distribution of various cell type proportions. Single-cell deconvolution study results revealed a significant increase in cancer- associated fibroblasts and T-cell subpopulation dysregulation within the tumor microenvironment among patients with distant metastatic treatment failure.

Current paradigms of cancer treatment are centered around targeting tumor cells. These treatments are often not enough to completely eradicate cancer, as the supportive cancer stroma may enable tumor recurrence and therapeutic resistance. In the past few years, available cancer therapies have expanded to improve endogenous immune cell responses through checkpoint blockades. We have seen a distinct benefit observed in some patients, including those with recurrent head and neck setting. However, efforts to replicate these successes for the definitive management of nonmetastatic advanced head and neck cancers have been unsuccessful.

One hypothesis is that T cells enable resistance to checkpoint inhibition in the microenvironment through cancer- associated fibroblast–TGF-β signaling. The microenvironment within head and neck cancers commonly consists of more than 80% fibroblasts. These fibroblasts are critical for various functions that regulate cancer progression through secreting soluble factors, metabolic effects, remodeling the extracellular matrix, and immune cross-talk. Furthermore, the stromal and immune cell composition of head and neck cancers have been demonstrated to be independent predictors of nodal metastasis and epithelial-mesenchymal transformation in results of single-cell, comparative, and cell culture studies. Thus, targeting this unique cell population within the tumor microenvironment of locally advanced head and neck cancer represents a promising, yet underexplored, method for overcoming treatment resistance.

The predictive risk-score research serves as the basis for the development of preclinical models to evaluate the feasibility of adjuvant tumor microenvironment modification with the goal of reducing the rate of distant metastatic disease.