Plasma-based cell-free DNA (cfDNA) appears to be a viable strategy comparable with tissue-based testing for selecting patients with KRAS G12C–mutant non–small cell lung cancer (NSCLC) for treatment with sotorasib (AMG 510), according to data from an analysis of the phase 2 CodeBreak 100 (NCT03600883) trial presented during the AACR Annual Meeting 2021.1

The first-in-class small molecule sotorasib irreversibly inhibits the KRAS G12C protein, which is found in approximately 13% of all lung adenocarcinomas.2,3 In February 2021, the FDA granted sotorasib priority review for the treatment of patients with KRAS G12C–mutated locally advanced or metastatic NSCLC following at least 1 prior systemic therapy based on data from the phase 2 CodeBreak100 trial.4 Results showed that the agent yielded an ORR of 37.1%, a median duration of response of 10.0 months, a DCR of 80.6% (95% CI, 72.6%-87.2%), and a median progression-free survival of 6.8 months.5

Guardant360 CDx is a next-generation sequencing-based in vitro diagnostic assay that sequences cfDNA from plasma; in August 2020, the assay was FDA approved for the comprehensive genomic profiling in patients with any solid cancer. For the analysis presented during the meeting, investigators sought to clinically validate the assay in selecting patients with KRAS G12C–mutated NSCLC who may be candidates for sotorasib.

The full analysis set of the CodeBreak 100 trial population included those with NSCLC harboring a KRAS G12C mutation confirmed via tissue assay, while the primary clinical efficacy analysis set, which aimed to clinically validate the Guardant360 CDx, included a subset of patients from the trial who had their mutation confirmed through plasma-based testing.

Moreover, the assay agreement analysis set, which aimed to clinically validate the sensitivity of the plasma-based assay, included patients from CodeBreak 100 who were positive or negative for KRAS G12C; off-trial patients who had evaluable results from both tissue- and plasma-based assays to address the lack of tissue-negative patients within the on-trial patient population.

In total, 126 patients were enrolled to the trial, 112 of whom underwent testing with Guardant360 CDx. Of the patients who received plasma-based testing, 78 patients tested positive for the mutation, 31 tested negative, and 3 patients had failed testing with the assay. Among the additional 132 patients procured for the sensitivity analysis, 80 had valid plasma and tissue results and 52 were either not tested or had failed tissue or plasma testing. In total, 189 patients had available matched tissue and plasma results available for the sensitivity analysis.

The primary objective of the analysis was to demonstrate the comparability of the efficacy linked with sotorasib in those who tested positive for KRAS G12C via plasma-based cfDNA sequencing and in the overall trial population via tissue-based sequencing. The primary end point was ORR by RECIST 1.1 criteria, as assessed by independent central radiologic review.

Important secondary objectives included examining the concordance between the 2 assays in a sensitivity analysis, as well as evaluating the additional efficacy of sotorasib in those who tested positive for KRAS G12C via the plasma-based assay. Specific secondary end points included positive and negative percent agreements of plasma assay relative to tissue assay, overall concordance between the 2 tests, DCR, and assay agreement analysis set.

Just under 5% of patients were never smokers, 11.9% were current smokers, 81.0% were former smokers, and 2.4% had missing information. Moreover, 42.9% had 1 prior line of treatment, 34.9% has 2 prior lines, and 22.2% had 3 prior lines; no patients were previously untreated. The median number of prior lines of therapy received was 2.

Guardant360 CDx is concurrently under review as a potential companion diagnostic to sotorasib. 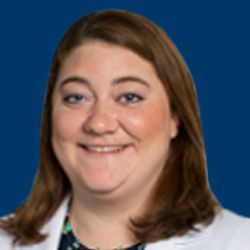