Prognosis, treatment outcomes, and molecular characteristics have become associated with sidedness in colorectal cancers making the distinction an essential characteristic for consideration in decison-making. 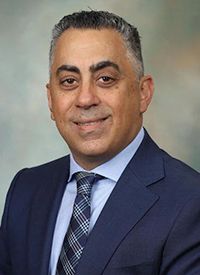 Prognosis, treatment outcomes, and molecular characteristics have become associated with sidedness in colorectal cancers (CRCs) making the distinction an essential characteristic for consideration in decison-making.1 Right-sided CRCs (derived from the cecum, ascending colon, or hepatic flexure) have been shown to have a worse prognosis than left-sided CRCs (derived from the splenic flexure, descending colon, or sigmoid colon) in retrospective studies.2,3

Retrospective analyses5,6 of treatment trials showing that responses and outcomes to systemic treatment regimens differed between left- and right-sided metastatic CRC (mCRC) have prompted development of prospective studies and introduced the idea of using tumor sidedness to guide selection of first-line treatment for mCRC.7,8 However, further studies are needed to identify molecular characteristics associated with tumor sidedness, which could help predict responses to currently available targeted therapies and help with development of novel targeted treatments.9

Tumor sidedness has also been shown to influence clinical outcomes (Table).3 Right-sided disease was associated with shorter time to recurrence after curative resection and was an independent predictor of poor prognosis in stage II colon cancer.3 Analysis of pooled data from 12 first-line randomized trials in the ARCAD database showed that patients with left-sided mCRC had longer median progression-free survival (PFS) and overall survival (OS) compared with patients who have right-sided mCRC, although the prognostic value of tumor sidedness was only present for KRAS wild-type disease.2 Specifically, the median PFS was 8.6 months vs 7.5 months (HR, 0.80; 95% CI, 0.75-0.84; P < .001) and the median OS was 21.6 months vs 15.9 months (HR, 0.71; 95% CI, 0.67-0.76; P < .001).2 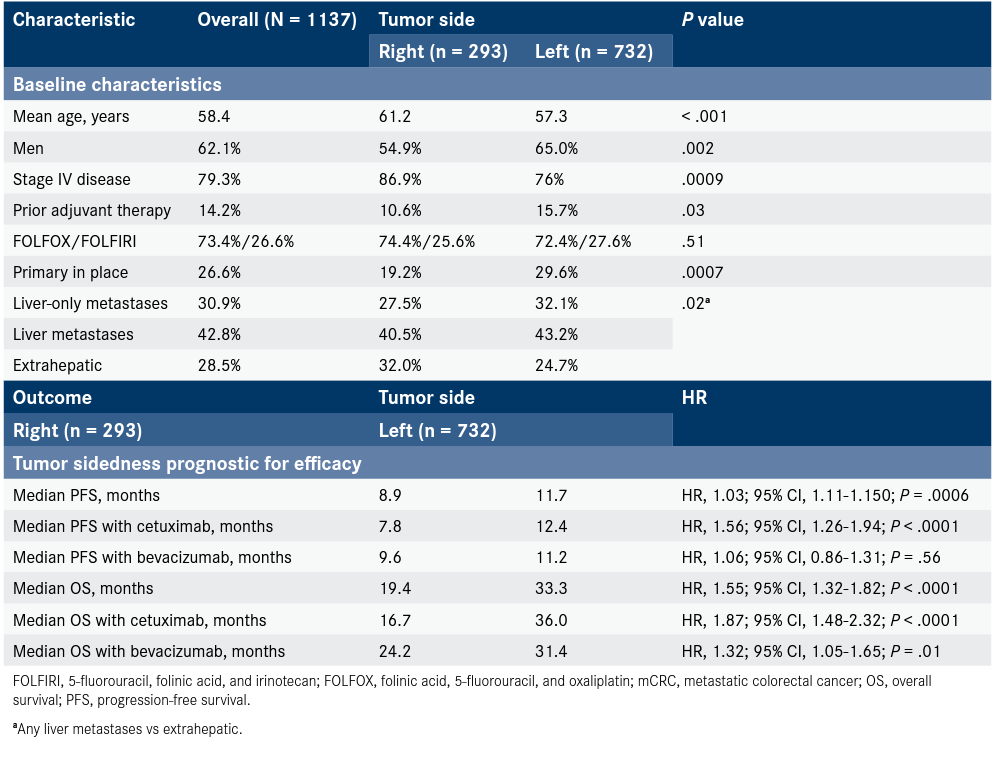 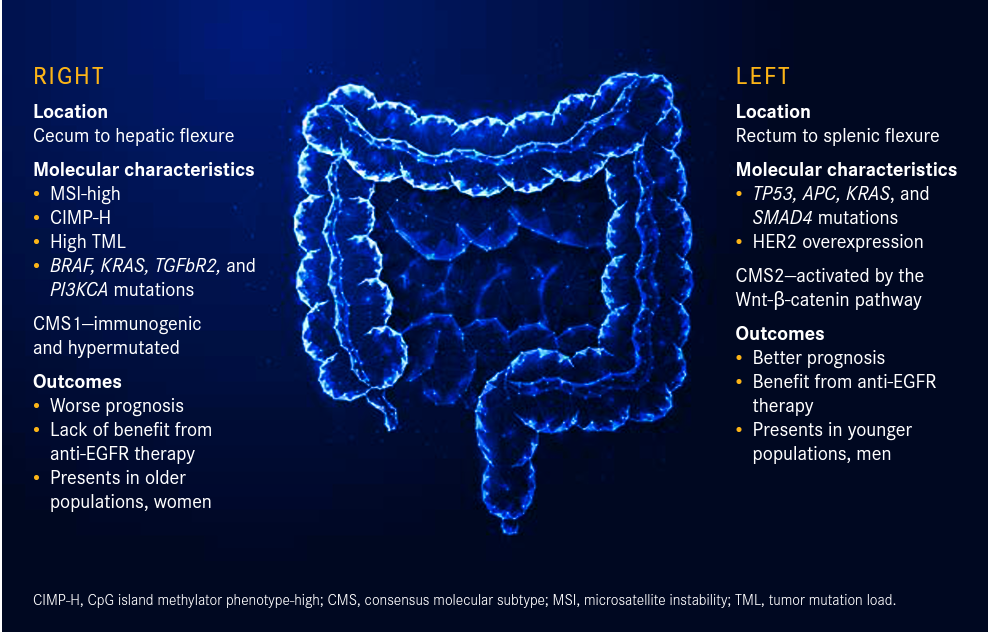 Microsatellite instability (MSI)-high status is also more common in right-sided cancers, and these MSI-high tumors have mutations of DNA mismatch repair genes, which leads to rapid increases in single nucleotide mutations and alterations in the length of repetitive microsatellite sequences in the genome.10 MSI-high tumors also have more T-cell infiltrates due to the larger numbers of immunogenic mutations and neoantigens.10 The CpG island methylator phenotype is also more commonly observed in MSI-high and right-sided CRC.9 By contrast, left-sided CRCs tend to be chromosomal instability (CIN)-high, which is characterized by aneuploidy and loss of heterozygosity, and typically progress via the CIN (traditional) pathway that starts with APC inactivation followed by KRAS activation and inactivation of TP53 tumor suppressor genes.10

Much research has established left- and right-sided CRC as having distinct clinical and molecular features, and new research has aimed to distinguish the molecular mechanisms for tumorigenesis.1,4 For example, a study of 411 samples of colon tumors from The Cancer Genome Atlas-COAD cohort found that dysregulation of APC, GSK3B, and several genes in the Wnt/ß-catenin pathway was observed in left- and right-sided tumors, with NOTUM, an inhibitor of Wnt activation, associated with CRC progression and OS.4 However, NOTUM expression levels had a different relationship with OS in right- and left-sided CRC, with high levels associated with shorter OS in right-sided CRC (HR, 0.44; 95% CI, 0.24-0.82; P < .01) and longer OS in left-sided CRC (HR, 3.23; 95% CI, 1.27-8.2; P < .01).4

The study also found that right-sided CRCs had lower levels of genes encoding for enzymes involved in breakdown of carcinogens, namely CYP2C8, CYP4F12, GSTA1, and UGT1A, as well as a greater shift toward aerobic glycolysis from oxidative phosphorylation, which may explain the aggressive nature of these tumors.4 By contrast, left-sided tumors had more predominant suppression of MS4A1 (CD20 tumor-infiltrating B cell marker) and BACH2 (transcriptional regulator of B and T follicular helper cells), and a potential connection with calcium homeostasis may contribute to less immune infiltration and may partially explain the less aggressive behavior compared with right-sided tumors.4

Post-transcriptional regulation was mediated by different RNA-binding proteins (NKRF and MSI2 for left- and right-sided CRCs, respectively) and micro-RNAs (miRNAs; miR-3607 and miR-29a in left-sided tumors; miR-155, miR-181d, miR-576 and miR-23a in right-sided tumors).4 Marker methylation also differed, with more hypermethylated CpG sites in right-sided CRCs and more hypomethylated CpG sites in left-sided CRCs.4 The authors concluded that their findings highlighted the considerable differences in left- and right-sided CRCs at multiple levels of epigenetic, transcriptional, and posttranscriptional regulation, which could help with future identification of biomarkers, prognostic indicators, and targeted therapies.4

Another recent study used single-cell RNA sequencing to profile the transcriptomes of 27,927 cells from 3 left- and 3 right-sided human CRCs obtained during curative surgery, with the goal of evaluating a complete spectrum of cell types and their molecular characteristics in left- and right-sided CRC to identify differences in pathogenesis that may contribute to increased tumor aggressiveness and poorer prognosis.1 The study found that compared with left-sided CRCs, rightsided CRCs had a 9-fold higher number of naïve CD4-positive T cells, which are a marker of poor prognosis in breast cancer. Further, molecular characteristics showed that a larger proportion of exhausted CD8-positive T cells were migratory.1 Left-sided CRC had a 13.8-fold higher ratio of preexhausted to exhausted T cells (a higher ratio is associated with better prognosis in lung adenocarcinoma) compared with right-sided CRC.1

Additionally, the T regulatory cells from left-sided CRCs had higher expression of immunotherapy-related genes, suggesting that they may respond better than right-sided CRCs to immunotherapies that act on dysfunctional T regulatory cells.1 The study also found that cancer cell subgroup 5, which were derived exclusively from left-sided CRC had upregulated signaling pathways associated with cancer, such as estrogen, HER2, TNF, HIF-1,and AMPK signaling, as well as cell death pathways (eg, apoptosis, necroptosis, autophagy, and mitophagy), the latter of which may explain the better prognosis associated with left-sided CRC.1 Additionally, the stronger signaling through EGFR, VEGF, and HER2 observed in left-sided CRC cells may reflect a greater sensitivity to monoclonal antibodies against these respective targets.1

In addition to the recent molecular analysis studies, early retrospective data from clinical trials have suggested that tumor sidedness may have implications for treatment.5,6 A retrospective analysis of results from the CRYSTAL trial (NCT00154102), which compared cetuximab plus FOLFIRI (folinic acid, fluorouracil, irinotecan) with FOLFIRI alone, and the FIRE-3 trial (NCT00433927), which compared FOLFIRI plus bevacizumab with FOLFIRI plus cetuximab, found significantly longer PFS, OS, and overall response rate (ORR) with FOLFIRI plus cetuximab in patients with RAS wild-type left-sided tumors but not in patients with RAS wild-type right-sided tumors. Authors cautioned that the small sample sizes of right-sided tumors may limit interpretability of the findings.6

Findings from a retrospective subgroup analysis of the CALGB/SWOG 80405 trial (NCT00265850), presented at the 2016 American Society of Clinical Oncology (ASCO) Annual Meeting, were pivotal for establishing the poorer prognosis of right-sided CRCs in response to conventional systemic therapy.5 The study found that the median OS was significantly shorter in patients with right-sided CRC (19.4 months; 95% CI, 16.7-23.6) than in those with left-sided CRC (33.3 months; 95% CI, 31.4-35.7).5

Similarly, a retrospective analysis of pooled data from the ARCAD trials showed that cetuximab was associated with improved PFS and OS in KRAS wild-type left-sided mCRC and a trend toward poorer outcomes with KRAS wild-type right-sided mCRC.2 The median OS was 22.3 months vs 20.5 months, respectively (HR, 0.85; 95% CI, 0.75-0.97; P = .01), and the median PFS was 9.3 months vs 8.5 months, respectively (HR, 0.77; 95% CI, 0.670.88; P < .001). Although the superiority of 1 drug cannot be established due to the retrospective and post hoc nature of the studies, they suggest that response to EGFR inhibitors may be inferior in right-sided CRCs.5

Accordingly, the National Comprehensive Cancer Network guidelines note that systemic therapy regimens containing an EGFR inhibitor (cetuximab or panitumumab) are only recommended for RAS wild-type and left-sided advanced and metastatic CRCs.11 Based on these findings, investigators aimed to prospectively evaluate whether right- and left-sided mCRCs had different responses to treatment.7,8 The phase 3 PARADIGM trial (NCT02394795) was a randomized, open-label, multicenter trial that evaluated the superiority of the anti-EGFR therapy panitumumab (Vectibix) or the anti-VEGF therapy bevacizumab (Avastin), in addition to mFOLFOX6, in patients with unresectable RAS wild-type mCRC.7

The data support using panitumumab with mFOLFOX6 as first-line therapy for patients with RAS wild-type and left-sided mCRC, according to the authors.7 However, in an interview with OncologyLive®, Tanios S. Bekaii-Saab, MD, FACP, said that although EGFR inhibitors are likely detrimental for right-sided mCRC, the PARADIGM trial findings that panitumumab is preferred as f irst-line therapy for left-sided disease should be interpreted cautiously because it compared FOLFOX/FOLFIRI plus panitumumab with doublet chemotherapy plus bevacizumab, which was found to be inferior to triplet chemotherapy (FOLFOXIRI; folinic acid, 5-fluorouracil, oxaliplatin, and irinotecan) plus bevacizumab in the phase 3 CAIRO5 trial (NCT02162563).8 Bekaii-Saab is the leader of the Gastrointestinal Cancer Program at the Mayo Clinic Comprehensive Cancer Center, medical director of the Cancer Clinical Research Office, and the vice chair and section chief for medical oncology in the Department of Internal Medicine at Mayo Clinic in Phoenix, Arizona.

This trial aimed to identify the optimal regimen for systemic treatment for patients with initially unresectable CRC liver metastases that are potentially resectable after downsizing.8 Patients with initially unresectable-only liver metastases (confirmed prospectively by an expert panel) were enrolled, and those with RAS or BRAF V600E mutations and/or right-sided primary CRC were randomly assigned to receive FOLFOX or FOLFIRI plus bevacizumab or FOLFOXIRI plus bevacizumab, and those with RAS/BRAF V600E wild-type and left-sided primary tumors were randomly assigned to receive FOLFOX/FOLFIRI plus bevacizumab or FOLFOX/FOLFIRI plus panitumumab.8

Bekaii-Saab said FOLFOXIRI plus bevacizumab is his chemotherapy of choice for patients who are eligible for FOLFOXIRI (typically younger, otherwise healthy patients), regardless of their tumor sidedness. Although the PARADIGM data suggest FOLFOX plus an EGFR inhibitor may be a good choice for patients with left-sided disease, Bekaii-Saab added that with RAS/BRAF wild-type, non–HER2 amplified CRC, he added that the regimen may be difficult to tolerate, particularly for older patients. Furthermore, he noted that because the OS curves separated late (at approximately 2 years) in the PARADIGM trial, it is unclear whether the difference in OS was directly related to treatment or another factor. “I’m not convinced that this regimen [FOLFOXpanitumumab] is for every patient,” he said.

Although recent data from the PARADIGM and CAIRO5 trials point toward differential responses between left- and right-sided mCRC to conventional first-line treatment regimens, tumors within a given subsite also show considerable heterogeneity in their molecular characteristics and tumor behavior.9 Further research is needed to identify relationships between tumor sidedness, molecular pathways, and response to treatment in mCRC.9