Beau Toskich, MD, discusses the potential of TheraSphere as a therapy in hepatocellular carcinoma, the importance of utilizing a multidisciplinary approach among novel radiation oncology agents, and his hope for a future prospective clinical trial evaluating Y-90.

Yttrium-90 (Y-90) glass microspheres (TheraSphere), a personalized radiotherapeutic approach, has demonstrated encouraging retrospective activity in patients with advanced hepatocellular carcinoma (HCC), said Beau Toskich, MD, who added that the next step is to evaluate the modality in a prospective, randomized setting and confirm the value of multimodal treatment.

“Obviously, [the efficacy shown] is only a small bell to ring when it comes to the overall treatment intent for patients who have a field defect that makes their liver prone to developing new tumors,” said Toskich. “However, if [TheraSphere] can be given as single agent, outpatient treatment for challenging HCC tumors and it can be used to downstage [tumors and serve as a] bridge to definitive surgery, it is certainly something that we want to add to our armamentarium.”

Findings from the retrospective LEGACY trial showed that 100% of patients treated responded to TheraSphere. Moreover, the 3-year overall survival (OS) rate was 93% among patients who underwent transplant or resection following treatment with TheraSphere.

In an interview with OncLive®, Toskich, an interventional radiologist at Mayo Clinic, discussed the potential of TheraSphere as a therapy in HCC, the importance of utilizing a multidisciplinary approach among novel radiation oncology agents, and his hope for a future prospective clinical trial evaluating Y-90.

OncLive®: How does TheraSphere compare with traditional forms of radiation?

Toskich: Transarterial therapies are commonly bundled together. However, bland embolization or chemoembolization rely predominantly on an ischemic effect of reducing blood supply to the tumor. However, just because something has embolization in its name and requires administration through a blood vessel, doesn’t mean that it is going to necessarily work the same. Radioembolization doesn’t aim to remove all the blood supply because oxygen is a favorable effect to have present with radiation therapy. The mechanism of action [of TheraSphere] is a means to radiotherapy where there is only a bit of penetration of the radiation energy into tissues. That is the major benefit of [TheraSphere] over conventional external-beam radiation; we can obtain difficult [radiation] doses, particularly in the tricky anatomy of the liver.

When someone is questioning how this [form of radiation therapy] is going to work, [I say], we have a lot of experience with radiation, this is just another form where we can [give] extremely high doses with a high degree of control that is conformal to the involved portions of the anatomy.

How did the historically low levels of Y-90 used lead to the inception of the LEGACY trial, which looks at significantly higher doses of radiation?

The LEGACY trial came out of a signal that we identified clinically [based on 2 features]. First, patients who have curative-intent T-stage HCC are not always amenable to surgical resection or thermal ablation, which are well-established guidelines. Oftentimes, those patients would have been treated with palliative therapies, such as chemoembolization, which is not necessarily the same as radioembolization in terms of outcomes. The second feature is that the way that we [give radiation therapy] had changed rapidly over the past 10 years.

The way that Y-90 was applied in the previous 15 years, prior to some of its applications highlighted in LEGACY, was that patients had to have extremely advanced disease and failed [all available treatments]. Then, we would try to treat very large liver volumes with very low doses [of Y-90]. We didn’t try to see if the tumor had favorable candidacy for Y-90, it was just [the treatment] that all patients with very advanced disease received.

However, we started seeing better responses in patients who received very high doses [of Y-90]. The next question became: How can we deliver [high] doses safely without damaging the entire liver? That is where this concept of studying individual sections of the liver with selective catheterizations [began as means] to determine what liver volume is expendable.

What is considered a high dose of Y-90?

Initially, we started [using] anywhere from 80 Gy to 150 Gy for brachytherapy. Then we started to push that limit to 190 Gy. Studies then started to come out showing that 190 Gy was well tolerated. We saw radiopathologic correlations in patients who went to resection or transplant who had [higher-dosed radiation therapy] in the neoadjuvant space. We saw complete pathologic necrosis rates [increase] with higher doses.

However, what is the limit [of radiation therapy]? The LEGACY trial engaged that question because it was the first multicenter study to look at patients with treatment-naive HCC who received [Y-90] with real-world interventions, such as resection or transplant. [The study also looked at Y-90] as a stand-alone agent in patients who weren’t candidates for treatments such as thermal ablation.

What key findings were reported from the LEGACY trial and what do the results mean for the future of TheraSphere as an ablative therapy?

[The LEGACY investigators] wanted to see whether they could obtain high response rates and evaluate the duration of responses; those were the primary end points of the trial. The overall response rate was [72.2% with TheraSphere]. [Moreover,] the data showed an 84% complete response rate within that group. We are seeing [TheraSphere] act as an ablative modality.

Around 76% of patients had durations of response of 6 months or longer, but local recurrence of the treated lesion was just over 5%. Patients were treated with an average of 410 Gy, which is more than triple what our initial doses were. However, there were no major adverse effects [AEs] reported that required anything more than medical treatment for abdominal pain, nausea, and other expected toxicities that we would expect to see after local therapy.

The OS rate of patients who were bridged to curative surgery was 93% at 3 years. These were patients with early- and advanced-stage disease. More importantly, patients who had stand-alone, ablative-dose, small-volume Y-90 had 83% survival at 3 years.

This is competitive with a lot of our ablative modalities or other local curative-intent modalities. Additionally, 67% of these patients had no viable tumor. We found that if we went above 400 Gy within that cohort, 100% of the evaluable tumors had no viable disease.

What is the importance of utilizing a multidisciplinary approach in HCC? How does the TheraSphere approach synergize or interfere with immunotherapy in this space?

In order for us to evolve to best treat our patients, we need to stop trying to only attack this disease and give sequential therapies. As we know, patients with HCC often have underlying liver disease, which poses 2 moving targets. That is really where [implementing] multidisciplinary care is critical. [Adding] that extra dimension [by] combining these therapies is where I see a lot of potential.

Neither therapy, be it immunotherapy or segmental ablative radioembolization, is excluding the other. Plenty of preclinical evidence support the types of antigen presentation that can occur and how we can augment an immune response by generating inflammation and internal necrosis with local therapy. Certainly, we know that it is rare for [therapies] to synergize, but when they do, it [often elicits some of the] best results in cancer care. For example, we had 2 negative phase 3 studies with immunotherapy before we realized that adding bevacizumab [Avastin; is needed]. Now, [bevacizumab and atezolizumab (Tecentriq)] is standard of care.

We shouldn’t give up on that signal. However, whether it is old school chemoradiation or new school immunoradiation, this is radiation therapy. I urge centers to remain agile and to not compress their capabilities by [giving all] patients with advanced disease [the same treatment]. We should engage oncotypes and phenotypes [to guide treatment selection]. If a patient has early segmental vascular invasion, fantastic liver function, and are otherwise excellent candidates for curative-intent therapy, maybe we treat neoadjuvantly with ablative Y-90, add immunotherapy, and then [think about] surgery.

What are some of the challenges with the LEGACY trial that warrant additional study?

LEGACY was a retrospective study. Many people want the gold standard of a randomized study. Randomizing patients to [TheraSphere versus] thermal ablation or resection is going to be challenging. That is a problem with personalized oncology: we now have subcategories of patients who want what treatment is best based on what we know. It is a lot easier to do that for systemic therapy.

We also need to find a way to reproduce [these findings] so that this is not a siloed therapy [available at a] couple of centers. We want to make this an option rather for more than a select few [patients] who are able to receive destination care.

I would like to see a tailored study where patients are prospectively enrolled because they have a particular phenotype. We know what type of HCC responds best to this therapy, so [it would be important] to select those patients beforehand during screening. [Enrolling] patients with a general diagnosis of HCC is not going to be helpful in moving the dial where we want to in the next 5 years. We have to select the right candidates based upon a simulation, our understanding of their disease, and the patient’s biologic markers. 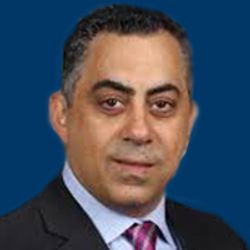 Grothey Spotlights the Growing HER2+ Paradigm in GI Cancers