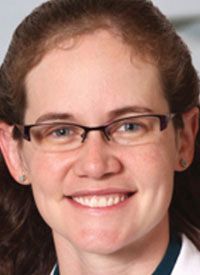 Osimertinib (Tagrisso) is the standard frontline therapy for patients with metastatic, EGFR-mutant non—small cell lung cancer (NSCLC), and although the drug can provide years of benefit, more options beyond chemotherapy are needed for those who progress on this treatment, according to Erin M. Bertino, MD.

“If the patient has a classic EGFR sensitizing mutation, my current practice is to give frontline osimertinib. However, it gets challenging when patients progress. Some national clinical trials are starting to examine patterns of resistance and therapies for progression. Our go-to was chemotherapy. [Now], I consider the possibility of using atezolizumab (Tecentriq), carboplatin, [paclitaxel], and bevacizumab based on the data from IMpower150,” said Bertino. “We are opening a clinical trial that's looking at the combination of ramucirumab (Cyramza) and pembrolizumab (Keytruda). Ideally, [these combinations] would be my preferred choices before resorting to chemotherapy.”

In an interview during the 2020 OncLive® State of the Science Summit on Lung Cancer, Bertino, a medical oncologist at The Ohio State University Comprehensive Cancer Center—James, discussed the current treatment landscape of EGFR-mutant NSCLC and the research being done to define chemotherapy-sparing combinations for patients who progress on frontline TKIs.

OncLive®: How has the treatment landscape in EGFR-mutant NSCLC evolved in recent years?

Bertino: For one, the FDA has approved one of the new EGFR inhibitors, dacomitinib (Vizimpro). Some of the new therapies have also appeared in the National Comprehensive Cancer Network guidelines. [In my presentation], I also reviewed the data from the RELAY and FLAURA trials, the latter of which led to the regulatory approval of osimertinib. The IMpower150 trial, is not an EGFR-specific trial, but has influenced how we use combination immunotherapy off-label in patients with EGFR mutations. [I concluded by] discussing what’s new and what we're trying to do for patients who [progress on a] TKI [in the frontline setting].

Could you discuss the data that led to the approval of dacomitinib as frontline therapy in metastatic EGFR-mutant NSCLC?

The approval was based on data [from the ARCHER 1050 trial], in which dacomitinib was compared head-to-head with gefitinib (Iressa). The trial showed improved progression-free survival with dacomitinib versus gefitinib. Now, we have 5 FDA-approved EGFR inhibitors. However, [dacomitinib] was approved after osimertinib was approved for use in the frontline setting, so [we don’t really know] how it’s going to fit into the landscape.

In the United States, we're probably going to see continued use of osimertinib because it has a favorable toxicity profile and really striking data, especially now that the overall survival (OS) results have come out. The main challenge is going to be finding a place for dacomitinib. Unfortunately, I believe it’s going to fall into the same category as erlotinib (Tarceva), gefitinib, and afatinib (Gilotrif), which all play second fiddle to osimertinib.

How has the subset analysis from the IMpower150 trial impacted the use of immunotherapy in patients with EGFR mutations?

The IMpower150 trial had a relatively small number of patients with EGFR mutations. The investigators examined carboplatin, [paclitaxel], and bevacizumab (BCP) versus carboplatin, [paclitaxel], bevacizumab, and atezolizumab (ABCP). In the subgroup analysis, investigators reported a benefit with ABCP that they didn’t see with ACP in patients with EGFR mutations. [ABCP] is not an FDA-approved regimen. However, we don’t have another therapy available for patients who progress on frontline osimertinib or an [alternate] TKI. We know immunotherapy by itself is not very effective in these patients. Data from the [IMpower150] and IMpower130 trials suggested, with a very small number of patients, that there wasn't really a benefit to giving chemotherapy and immunotherapy [in the EGFR-mutant population]. I've seen some of my partners and other oncologists trying to use the 4-drug combination [from the IMpower150 trial] because there does seem to be some activity in a patient population with limited options.

How do you approach current treatment selection in EGFR-mutant NSCLC?

In our current practice, every patient with adenocarcinoma or nonsquamous NSCLC needs to be tested [for driver mutations]. Ideally, I'd like to wait until we have the results back before starting therapy. The data show osimertinib is the best available TKI. Based on the trial data and what I’ve seen in practice with osimertinib, patients can go months, or even years, without progression.

Could you discuss the research that is being done to address resistance to osimertinib?

[Resistance] is a little bit of a different animal. Anytime we can identify a target, we get better outcomes. For instance, with osimertinib, we're addressing the EGFR mutation up front. One of the things we love about osimertinib is that it has good central nervous system activity. With targeted agents, we’re more likely to get that brain penetration and be able to control brain metastases, which are a big source of morbidity for our patients. The more we understand what's happening in the patient's cancer, the better we can treat them.

We know VEGF overexpression is important in patients with EGFR mutations and that immunotherapy by itself is not effective. We’re trying to define a chemotherapy-sparing regimen that has activity in this population [upon progression]. To this end, we’re opening a trial at Ohio State University that will evaluate the combination of pembrolizumab and ramucirumab. Investigators are currently making some amendments [to the protocol] before opening it for enrollment. It's a relatively small trial. If we see responses in the first dozen or so patients, we plan to enroll 34 patients. We’re also going to examine several correlative studies along the way. We’re hoping to see some efficacy. It's a single-center trial, but some other centers have expressed interest in getting involved.

Some really critical trials are emerging for patients who have developed resistance to EGFR TKIs. We can use chemotherapy, but there may be a place to use VEGF inhibitors and immunotherapy beyond TKIs in this patient population. If we can address the pathways that are causing resistance and avoid chemotherapy, or even find a different TKI, that's where we're really going to see the most “bang for our buck.”

What is the key takeaway regarding EGFR-mutant NSCLC?

It's critical to have [the results of next-generation sequencing] before you start treatment for a patient with nonsquamous NSCLC. One of the issues we’re seeing is patients are receiving chemoimmunotherapy with pembrolizumab, which is not very effective; in fact, [this approach] has been associated with increased toxicity when the patients are switched over to drugs like osimertinib. We want to get patients on the right therapy at the right time, and the right time is at diagnosis, or shortly after diagnosis. [Sequencing information provides] really critical information that can change a patient's treatment trajectory.

The standard of care right now is osimertinib, unless for some reason a patient can't receive it. [The OS analysis from the FLAURA trial] showed favorable data with this agent versus one of the older TKIs. That was really striking to me because I wanted to know whether this really was the wonder drug or whether I could use a drug I was familiar with, like erlotinib or gefitinib, and switch over to osimertinib at progression. However, the data really suggest that you get the most benefit [from osimertinib by] using it up front.