Vincent Lam, MD, describes frontline indications for this patient population, as well as strategies that can be utilized to overcome TKI resistance in later lines of therapy. 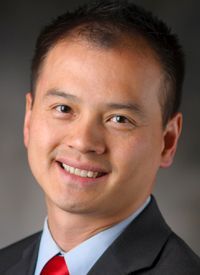 ALK-targeted Tyrosine kinase inhibitors (TKIs) have proven efficacy in the frontline treatment of patients with advanced, ALK-positive non–small cell lung cancer (NSCLC), but several factors must be taken into consideration when determining later-line approaches to combat the complex resistance mechanisms that develop, Vincent Lam, MD, said in a presentation during the 18th Annual Winter Lung Cancer Conference, a program hosted by the Physicians Education Resource®, LCC.1

“The acquired resistance landscape upon progression with a second-generation ALK TKI is quite diverse, and we’re still learning about new bypass mechanisms and second drivers,” said Lam, an assistant professor of oncology and director of the Esophageal Cancer Research Program at Johns Hopkins Medicine Sidney Kimmel Comprehensive Cancer Center, during the presentation. “The overall [theory] right now is to stay on the current TKI as long as possible, [implement] local ablative therapy for oligoprogression or dose escalation for alectinib [Alecensa] in central nervous system [CNS]–only progression, and, if available, utilize repeat molecular profiling to help inform our next treatment option.”

In his presentation during the meeting, Lam further described frontline indications for this patient population, as well as strategies that can be utilized to overcome TKI resistance in later lines of therapy.

Updated results from the phase 3 ALEX study (NCT02075840), which examined the use of alectinib vs crizotinib (Xalkori) in patients with previously untreated, ALK-positive NSCLC, indicated that those who received alectinib experienced a 5-year survival rate of 62.5%. The median progression-free survival (PFS) was 34.8 months in the alectinib arm compared with 10.9 months in the crizotinib arm.2

However, Lam noted that toxicity is an important consideration when determining whether a patient should receive lorlatinib. Adverse effects such as hypercholesterolemia (70%), hypertriglyceridemia (64%), weight increase (38%), peripheral neuropathy (34%), and cognitive effects (21%) have all been associated with lorlatinib.6

“Lorlatinib is undoubtedly coming to the firstline landscape in the future, and we’ll have to see what acquired resistance looks like in this new context,” Lam said.

If possible, it is ideal to keep patients on their current TKI for as long as possible, according to Lam. Results of a retrospective analysis indicated that in cases of oligoprogression, local ablative therapy, such as radiation and/or surgery, yields an additional 6 months of disease control. Also, for patients on alectinib with CNS-only progression, escalating treatment with alectinib to 900 mg twice daily may be useful.7

When selecting therapies for the second line of treatment and beyond, options include starting with the thirdgeneration TKI lorlatinib if it has not been used already. Treatment with a second-generation TKI such as brigatinib could also represent an effective strategy for some patients, according to Lam. Other options in the second-line treatment and beyond include targeted agents for genes that bypass resistance pathways, such as MET, EGFR, or BRAF, and chemotherapy-based regimens.

According to Lam, several factors need to be considered when choosing among these regimens.

“It’s helpful to review the general paradigm of acquired resistance and ALK,” Lam said. “About 50% of resistance to ALK TKIs is due to acquired mutations in the ALK gene that impair the efficacy of the current ALK TKI. There is a broad spectrum of these mutations, the most common being the solvent front mutation [ALK] G1202R; this is considered to be an ALK-dependent acquired resistance because the tumor is primarily still signaling through the ALK receptor tyrosine kinase. Next-generation TKIs should be effective.”

Other acquired resistance is ALK independent and involves second driver alterations, histologic transformation (such as small cell transformation), or other bypass mechanisms that mediate tumor proliferation despite adequate ALK inhibition. Merely switching to a more potent ALK TKI likely will not overcome this resistance, said Lam.

The Importance of Repeat Molecular Profiling

Moreover, the use of molecular profiling should be employed to inform decisions in later lines of treatment; this can be done both through standard tumor tissue biopsies and plasma-based assays, although Lam noted that some limitations exist with liquid biopsies.

“If genetic testing reveals a G1202R mutation, it’s best to pursue treatment with lorlatinib, whereas someone with a L1196M mutation should be treated with brigatinib,” Lam explained. Additionally, patients with MET amplifications and fusions should be treated with crizotinib or capmatinib (Tabrecta), whereas those with EGFR and BRAF V600E mutations and NRG1 and RET fusions should be approached with a targeted agent for second driver mutations, Lam added.

The ALK Master Protocol is open across the United States, enrolling patients with ALK-positive, stage IV NSCLC who have progressed on a second-generation TKI. To be eligible for enrollment, patients must have measurable disease and an ECOG performance status of 0 to 2. Patients could have received prior crizotinib but not lorlatinib. Notably, patients with stable, untreated brain metastases are permitted to enroll.

Patients will be stratified based on ALK mutation to one of several different TKIs or chemotherapy. The primary objectives of the study include objective response rate (ORR) to the ALK TKI based on mutation, ORR to the chemotherapy-based regimen for patients with non–ALK-mutant disease, and ORR to crizotinib based on ALK L1198F or MET amplifications. Secondary end points include PFS, duration of response, overall survival (OS), and CNS ORR, as well as safety and tolerability.

“Notably, only about half of the patients in this study had a fresh biopsy specimen obtained for tissue biopsy profiling prior to starting lorlatinib,” said Lam. “The actual number of responders who actually had no ALK resistance mutation may be lower than what was detected in the study.”

Available data also support the use of brigatinib following treatment with a second-generation TKI. Preliminary results from the phase 2 ATOMIC study (NCT02706626) showed that brigatinib elicited an ORR of 40% and a median PFS of 7 months in patients who were primarily previously treated with alectinib; the median OS had not yet been reached.9 Moreover, according to data from the BRIGALK expanded access study (NCT02784158), which primarily enrolled patients who were previously treated with ceritinib, brigatinib elicited an ORR of 50%, a median PFS of 6.6 months, and a median OS of 17.2 months.10

Lastly, platinum-based chemotherapy and pemetrexed are the most commonly used chemotherapies in this patient population, noted Lam. Patients with ALK-positive disease are known to demonstrate increased sensitivity to pemetrexed.

“That being said, the IMpower150 chemotherapy and immunotherapy regimen with carboplatin, paclitaxel, bevacizumab [Avastin], and atezolizumab [Tecentriq] is another approved chemotherapy-based option,” concluded Lam, “as that study did show PFS benefit compared with chemotherapy and bevacizumab alone for the EGFR/ ALK [patient] subgroup[s].”

However, Lam cautions that patients with EGFR mutations may be largely driving the clinical benefit seen there, as patients with ALK mutations were only a small percentage of that combined subgroup.