To Radiation With Love: A Bench-to-Bedside Immunotherapy Story 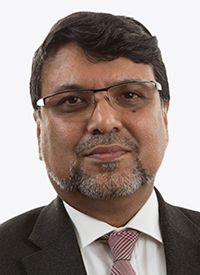 More than 20 years ago, I was a younger immunologist training in radiation oncology at Montefiore Health System, Albert Einstein College of Medicine, in Bronx, New York, one of the country’s leading institutions for medical education, basic research, and clinical investigation.

Radiation fascinated me. At the time, radiation had been seen just as killing cells. I theorized, however, that in a carefully structured setting, radiation could provoke cells to act differently. I began studying the consequences of tumor cell death after radiation therapy (RT) and looked into how exposed, dying cells are cleared in the body. Since tumor cells carry unique proteins that become mutated, it seemed reasonable that the body’s immune system could be trained to recognize cancer proteins as “foreign.” By alerting the body, I theorized that we should be able to use our own immune system to fight cancer.

To activate the immunity, we started with a group of professional antigen presenting cells, the dendritic cells (DCs). These cells present as sentinels under the skin and mucosal surfaces and serve to guard us from “strangers” and “dangers”—essentially, pathogens that can invade our body to cause harm.

As cells die from infection, DCs “eat” the dead cells (phagocytosis) and migrate to adjacent lymph nodes, a training center for lymphocytes (white blood cells). Here, the DCs process and present protein fragments from pathogens on the DC cell surface to activate T and B lymphocytes and stimulate the proliferation of killer cells that can fight the pathogens inside the body.

However, upon stimulation with a naturally occurring protein, FMS-like tyrosine kinase-3 ligand (FLT3L), we can increase the number of DCs in blood. We started to study this protein and how it prompts the creation of more DCs. We decided to combine a course of ablative RT with FLT3L to manipulate the clearance of these irradiated, dying tumor cells to activate tumor-specific immunity.

Putting this practice to test in mice, our lab was the first in the United States to publish that systemic administration of FLT3L following an ablative course of primary tumor radiation-induced antitumoral immunity.1 We had suppressed pulmonary metastases with long-term cure and immune memory in mice with metastatic lung cancer. These studies showed for the first time that irradiation enhanced the immunogenicity of tumor cells. The study also demonstrated that tumor antigens could enact DC activation and the cross-priming of T cells.

We were excited and could not wait to translate these seminal lab findings to patient care. The bench-to-bedside process, however, has been fraught with challenges. Since FLT3L by itself cannot control tumors, drug companies were skeptical that this theory could work. Countless hours were spent trying to design studies that could test the quantity of radiation doses and fractionation.

Eventually, we found a partner in Celldex Therapeutics to aid us in this quest of developing a novel treatment. Celldex, a Hampton, New Jersey—based company that develops therapeutics to address devastating diseases, obtained rights to FLT3L, and we were on our way. Then, more progress: Tibor Keler, PhD, a founder and chief scientific officer of Celldex, and I obtained a National Institutes of Health small business innovation research grant. This allowed us to investigate the immunomodulatory properties of FLT3L in combination with RT.

Now, years later, I am the founding director of the Einstein Institute of Onco-Physics. Although housed in the Radiology Department at Montefiore and Einstein, the institute involves the entire Einstein medical school, community, and affiliated hospitals in our mission of applying the physical sciences to the diagnosis, prevention, and treatment of cancer. I am also the vice chair of radiation oncology at Montefiore Einstein Center for Cancer Care and Albert Einstein Cancer Center.

Wearing these hats, I have the privilege of working closely with a brilliant team of physicians and scientists. Together, we are investigating how tumors exposed to radiation can behave as an in situ tumor vaccine, using FLT3L. Is it possible that, using radiation, we’ve found the missing key to waking up the immune system to fight cancer?My colleague Nitin Ohri, MD, an associate professor of radiation oncology at Montefiore-Einstein, initiated a pilot clinical trial to investigate whether a combination of FLT3L and ablative stereotactic body radiation therapy (SBRT) to a single pulmonary metastasis can induce regression of nonirradiated metastatic lesions in patients with metastatic lung cancer. It also may improve overall survival of these patients, with few to no adverse effects.

Although these are interim results, what we’ve seen in the prospective clinical trial is encouraging. It is not lost on any cancer specialist that although lung cancer might not receive as much mainstream attention as other cancers do, 150,000 people in the United States die from this disease each year.2 This makes lung cancer the leading cause of cancer deaths for men and women. In fact, more people are dying from lung cancer than the combination of people dying from colon, breast, and prostate cancer. A new treatment modality for this disease is long overdue.

One can imagine our excitement when our prospective clinical trial findings for patients with metastatic lung cancer were selected for the clinical trials plenary session at the 2018 American Association for Cancer Research Annual Meeting in Chicago, Illinois.3

During the session, Dr Ohri discussed the results of our study. Trial participants had received 5 daily subcutaneous injections of FLT3L, along with SBRT to 1 of the lung tumors. The 1-week regimen had almost no toxicity and produced significant responses in unirradiated tumors (abscopal effect) in 5 of 9 patients. It also appeared to improve survival in patients who had undergone chemotherapy and immunotherapy with immune checkpoint inhibitors to no avail.

It is possible that our treatment induced and reinvigorated an antitumor immune response in patients who had progressive disease on checkpoint inhibitors. Some of these patients survived as long as 18 months without receiving any additional therapy, giving them more time than they ever expected to continue their lives and be with their loved ones.My research in the 1990s started when cancer immunotherapy was in its infancy. Today, our patients might begin to benefit from a relatively nontoxic and noninvasive therapy regimen.

When I started my training in radiation oncology, radiation had just a palliative role when we cared for people with metastatic cancer. If the result of this trial holds true, radiation will be used more often to awaken the immune system to fight metastatic cancer, and the dying tumor cells can actually become an effective in situ tumor vaccine.

As these scientific findings continue to be presented, I’m overwhelmed. After all the persistence, tears, and sheer joy, we can look into the hopeful eyes of our patients and reflect upon what it takes to move science from bench to bedside. Thank you to radiation for providing early inspiration and paving our path on this journey.