Dr. Munshi on the Role of CAR T-Cell Therapy in Relapsed/Refractory Multiple Myeloma 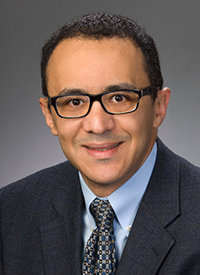 on Hematologic Malignancies, Sameh Mikhail, MD, a medical oncologist at the Mark H. Zangmeister Cancer Center, Mount Carmel Health System, covered the impact of these trials on the treatment landscape of multiple myeloma. In an interview during the meeting, he discussed the promise of daratumumab, as well as the potential of medical marijuana to curb the adverse events (AEs) seen with potent anticancer drugs.

OncLive: Can you touch on the importance of the CASTOR and POLLUX studies?

Mikhail: The CASTOR and POLLUX trials were 2 recent trials that were very well received in the medical community. They introduced a new agent, daratumumab, in combination with commonly used myeloma therapy, such as bortezomib and lenalidomide. The 2 trials had similar designs; they included regimens of bortezomib and dexamethasone either alone or in combination with daratumumab, or lenalidomide plus dexamethasone with or without daratumumab.  Both trials were conducted in patients with relapsed or refractory multiple myeloma.
... to read the full story
To Read the Full Story
REGISTER
LOG IN