Lori J. Wirth, MD: You mentioned iodine-refractory thyroid cancer, and those are the patients we see in medical oncology. I would venture to say that most of my medical oncology colleagues can’t recite the ATA [American Thyroid Association] Guidelines definition of iodine-refractory disease. We might mention in our notes that the patient had radioactive iodine, and that’s usually about all we think about. But what is a simple explanation of iodine-refractory differentiated thyroid cancer? How do you boil it down so you can remember it without having to turn to page 115 in the ATA Guidelines?

Jennifer Sipos, MD: Page 115 of 300, yes. That’s a tougher question than advertised. This is something we labor over constantly. In our tumor boards, we go back and forth between endocrine and oncology about whether something is iodine refractory or not. Should we try 1 more dose of that radioactive iodine? That’s reflective of the literature as well. It’s about as clear as mud as to what truly constitutes iodine-refractory disease.

A group got together in Martinique recently for a multidisciplinary conversation about what constitutes iodine-refractory disease and the best way to manage it using radioactive iodine. They summarized it nicely. They came up with clinical scenarios that would indicate which patients may be iodine refractory. They had 5 clinical scenarios, but they also made the caveat that this is an individual decision based on the patient’s clinical factors, the options for treatment, and contraindications for treatment.

In general, there were 5 clinical scenarios included. The first scenario was a patient in whom there is no I 131 [sodium iodine] uptake present on the diagnostic scan. That’s probably the most widely used criterion, but also 1 of the most controversial concepts. You could make a hole in that argument because we know that diagnostic whole-body scans are not very sensitive for identifying iodine-avid disease. That’s probably 1 of the loser criteria, but it is helpful when we’re trying to assess whether someone is qualified to get into a clinical trial. We can easily order a diagnostic scan and then say, “OK, it’s negative. We’re going to proceed with getting them into a clinical trial because we know they need a clinical trial.”

A diagnostic scan is insensitive. Depending on the studies you read, when you give patients a higher-dose treatment with radioactive iodine, the post-treatment scan will show a higher percentage of iodine-avid tumor.

Having said that, the second criterion is no I-131 uptake on a post-treatment scan. That is or 1 of the clinical scenarios they outlined. But there are also some holes in that argument. You could have concerns that the patient didn’t have the post-treatment scan at the appropriate time interval. If we did a post-treatment scan 8 days after they received radioactive iodine, but we had previously done it 4 days post–radioactive iodine, perhaps we would have seen that there was some avidity of the tumor or iodine. There are definitely holes in that argument as well.

A third scenario is that there is iodine uptake in some, but not all, tumor foci. If the patient has multiple metastatic foci in the lungs and uptake in perhaps 1 or 2, but then there’s a metastasis in the neck that didn’t take up the radioactive iodine, you could use that to say this is iodine refractory. But are the areas that took in the iodine refractory or not, because they took it in? What distinguishes that is perhaps that the tumor shrunk in that area but not the other areas. We can use that to say they’re iodine refractory and potentially remove the tumor in the neck that didn’t take up the iodine. Then that patient has had a treatment for their disease in all areas.

The fourth scenario is progression of metastases despite recent I-131 uptake. We may do a post-treatment scan, and the lung nodules show that there was avidity of the iodine in those lung nodules, but they continue to grow 6 months after the treatment. That suggests that tumor does not respond to uptake with the shrinkage or stability of those lung nodules.

The fifth criterion, which is also fairly weak but important, is progression of metastatic disease despite accumulative administered activity of greater than 600 mCi. We can certainly treat patients if they’ve already received 600 mCi, but the question is whether it benefits them. Should we think about a different approach? All of us would say that there have been times when, although a patient is getting close to or has even exceeded that threshold, we’ve considered giving another dose. If they had gotten 10 years of disease stability out of those curative activities, perhaps we can get another couple of years of stability of their disease if we give them another treatment.

This is an individual decision that we as providers, both endocrinologists and oncologists, need to have careful conversation with the patient about: “I don’t think another treatment is going to work.”

The other thing we should consider that I didn’t talk about is optimal preparation. A lot of my patients come to me from the community, and it may be that the patient is the only thyroid cancer patient whom the provider sees. They’re not familiar with some of the caveats of preparation for radioactive iodine, including the low-iodine diet. We don’t have a lot of good data to support that it improves the treatment, but all of us would agree that we should try to make sure our patients are as iodine-free in their circulation as they can be. We recommend a low-iodine diet prior to treatment. If the patient had been amiodarone prior to getting their radioactive iodine, then we know they were saturated. Perhaps that treatment wasn’t going to work because of that iodine saturation.

I always look back and have a careful conversation with the patient if they got their radioactive iodine at an outside institution. I ask, “Were you on a low-iodine diet?” and those sorts of questions. “Did you have a CT scan beforehand that had contrast?” [I ask about] things that would suggest that the patient may not have been completely depleted prior to the treatment. Maybe I could get away with giving another treatment. 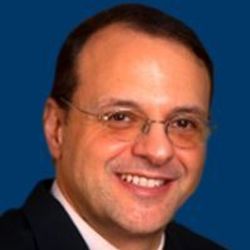