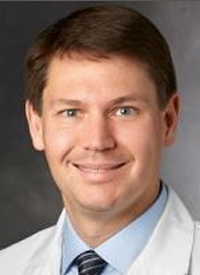 Mobocertinib (Exkivity), a first-in-class oral EGFR tyrosine kinase inhibitor (TKI), has been granted accelerated approval by the FDA, establishing a new treatment option for patients with metastatic non–small cell lung cancer (NSCLC) that harbors EGFR exon 20 insertion mutations. Specifically, this indication applies to patients whose disease has progressed on or after platinum-based chemotherapy.

In an interview with OncologyLive®, Joel Neal, MD, PhD, associate professor in the Division of Oncology at the Stanford Cancer Institute at Stanford University in Palo Alto, California, discussed the evolving treatment landscape for patients with EGFR exon 20–mutant NSCLC.

What makes mobocertinib a novelty in this patient setting?

Mobocertinib is a small-molecule EGFR TKI. It’s different than the available 5 EGFR TKIs because it has particular activity against the EGFR exon 20 insertion mutation, which other EGFR inhibitors inhibit minimally or not at all. Patients with EGFR exon 20 insertion–mutant NSCLC had an unmet need for treatment directed against this mutation. Because the earlier EGFR TKIs didn’t inhibit this [mutation], patients could have a minor response lasting only a couple of months.

This drug provides a better response rate: 28% to 35% by independent and investigator review [respectively]. We also [looked at the] progression-free survival. [The median was] 7.3 months. It appears on the shorter side, probably because [approximately] two-thirds of the patients didn’t have a response or maybe didn’t have [central nervous system] control. But out of those [who did respond], those responses were remarkably durable [with a median DOR of] 17.5 months. Those data led to the approval of this agent, which is unique for this patient group with an unmet need.

What adverse effects (AEs) do clinicians need to be aware of when prescribing mobocertinib?

Predominantly diarrhea, which is manageable with antidiarrheal medicines for most patients and occasionally by dose reduction. But I discourage [dose reduction] because the higher dose is better if the AEs can be managed. In addition, [other AEs associated with] EGFR inhibitors may occur, including rash, rash with acneiform, or dry skin on the face, chest, and back. There may be nausea, vomiting, and other [gastrointestinal] AEs.

There are a few rare but serious AEs as well. These includes pneumonitis, as well as [heart rate-corrected QT] QTc prolongation, which rarely leads to problems such as Torsades de pointes. Keep an eye on interactions with other QTc-prolonging medications. I recommend frequent electrocardiograms for patients, especially when starting.

How will the approval of both amivantamab (Rybrevant) and mobocertinib change the treatment paradigm for this patient population?

I suspect that these drugs are going to be complementary, that the mechanism of action doesn’t preclude 1 from working after the other. Both represent novel ways to target EGFR exon 20 insertion mutations. We could envision future clinical trials combining these strategies together to have better efficacy but also potentially more AEs. I don’t think [investigators] are completely sure exactly how amivantamab is working so well [for those with] EGFR exon 20 insertion mutations, whereas for EGFR TKIs, we understand their ATP-competitive binding fairly well from other analyses. Amivantamab is unique, and I think that these are going to be complementary approaches.

What does the future hold for mobocertinib?

The response rate of chemotherapy in the general [population of patients with] EGFR-mutant lung cancer is approximately 20% [to] 50%. Progression-free survival may be 6 [to] 7 months, which is similar to what we saw for mobocertinib. This doesn’t mean that mobocertinib is ineffective, but the bar may be higher: to beat first-line chemotherapy. As a result, we’re considering possibilities such as combining mobocertinib with chemotherapy, which gives that additive effect together with chemotherapy.

[Investigators in] our field will move in the direction of considering combinations of these small molecule EGFR TKIs, such as mobocertinib, together with platinum chemotherapy. But for each individual patient, it’s great to have both options because the AEs are higher when we’re combining 2 different types of therapy together.

This [approval] represents a tremendous step forward based on research and rationally designed drugs for this group of patients with an unmet need. As we move forward with the combinations with chemotherapy and between different agents, [we must ask] how we better [develop] these drugs to [permeate] the brain. These patients are at high risk of central nervous system metastasis, and neither amivantamab nor mobocertinib nor chemotherapy has ideal central nervous system penetration. 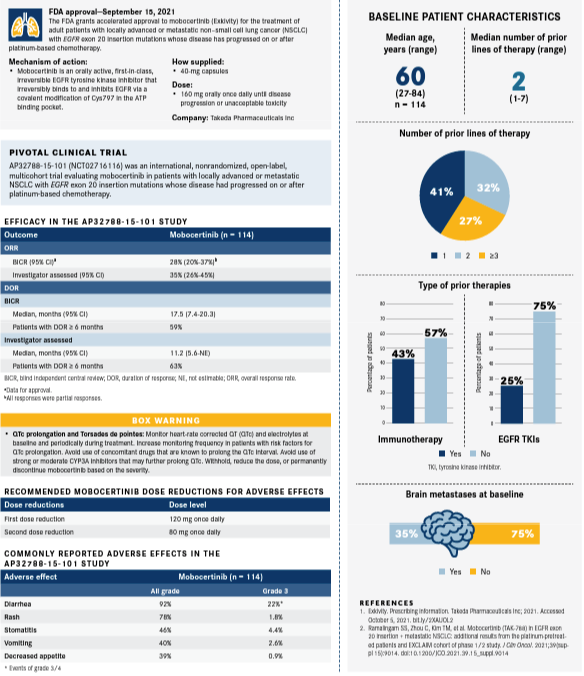