The invasive disease-free survival benefit with adjuvant T-DM1 versus trastuzumab in patients with HER2-positive early breast cancer who had residual invasive disease following neoadjuvant therapy was observed regardless of the type of neoadjuvant chemotherapy used. 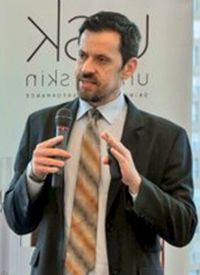 The KATHERINE trial included 1486 patients with HER2-positive, nonmetastatic invasive primary breast cancer who were randomized in a 1:1 ratio to adjuvant T-DM1 or trastuzumab. Prior neoadjuvant therapy had to consist of ≥6 cycles of chemotherapy containing a taxane (with or without anthracycline) and ≥9 weeks of trastuzumab.

At the 2019 San Antonio Breast Cancer Symposium (SABCS), lead study author Max S. Mano, MD, PhD, presented a poster with several subanalyses of the trial, including a comparison of patients who received anthracycline (AC)-based NACT versus those who received non-AC&shy;—based NACT.

For their analysis, the researchers also identified 4 mutually exclusive high-risk subgroups. Although these were small subsets, there was an improvement in the 3-year iDFS rate with T-DM1 across all 4 subgroups.

“All of the high-risk patient subgroups benefited from T-DM1,” Mano, who is from the Instituto do Câncer do Estado de São Paulo, São Paulo, Brazil, said in an interview with OncLive at SABCS.

“The benefit from T-DM1 was the same in these patients as in the full trial population.” These patients with small tumors are usually referred to surgery, but Mano said these data may cause him to rethink this. “Perhaps we should be more careful in this patient population. Maybe some of these patients are better treated with neoadjuvant chemotherapy.”

In their poster, the Mano et al also drilled down on patient demographic and safety data across the NACT cohorts.

Patient characteristics were, for the most part, well balanced across the treatments arms, regardless of the type of neoadjuvant regimen. The median patient age was around 50 years old, about two-thirds of patients were white, approximately three-fourths of patients were ER- and/or PgR-positive, and about 80% of patients received adjuvant radiotherapy.

A higher percent of patients in the AC arm had an ECOG performance status of 0, at about 84% versus about 72% in the non-AC arm. The authors also noted in their poster that “patients treated with AC-based NACT were less likely to be from North America and less likely to be Asian.”

Also across the non-AC arm, about three-fourths of patients received neoadjuvant carboplatin/cisplatin and about 95% were treated with a neoadjuvant taxane for >12 weeks.

Overall, the safety profile was similar between the AC and non-AC arms. Adverse events (AEs) reported in previous studies to have occurred more commonly with T-DM1 or trastuzumab (eg, hepatotoxicity, peripheral neuropathy, hemorrhage, infusion-related reaction/hypersensitivity, and cardiac dysfunction) had similar all-grade incidence rates between the AC- and non-AC cohorts.

The researchers did note, however, that all-grade thrombocytopenia occurred at a higher rate (32.5% vs 27.4%) in the T-DM1 non-AC arm compared with the T-DM1

Mano noted that the increased AEs in the non-AC T-DM1 group were usually resolved and “did not impact treatment continuation.”

Based on the overall population analysis of KATHERINE, the FDA approved T-DM1 in May 2019 for use as an adjuvant treatment of patients with HER2-positive early breast cancer who have residual invasive disease following neoadjuvant trastuzumab and chemotherapy.

The invasive disease-free survival (iDFS) benefit with adjuvant ado-trastuzumab emtansine (T-DM1; Kadcyla) versus trastuzumab (Herceptin) in patients with HER2-positive early breast cancer who had residual invasive disease following neoadjuvant therapy was observed regardless of the type of neoadjuvant chemotherapy (NACT) used. A benefit with T-DM1 was also observed across several high-risk patient populations, according to subgroup analyses from the phase III KATHERINE trial.