Emerging Combinations of TACE for BCLC Stage B/C HCC

Masatoshi Kudo, MD, PhD: In the phase 1b study, lenvatinib and pembrolizumab showed a very good outcome in terms of objective response rate and overall survival [OS]. OS is about 22 months, and the response rate is very high, about 48% by mRECIST [modified RECIST], per independent review. As compared with other combination therapy, lenvatinib-pembrolizumab achieves a very high response rate and a long PFS [progression-free survival], longer than 9 months, and OS of more than 20 months. The most important thing is the PD [progressive disease] rate is very low. When we look at the waterfall plot, the PD rate is very small, just 7%, so it’s a very promising combination treatment modality.

We have a new definition of progression: time to un-TACEable progression. That is the definition of progression. At that point, we stop the protocol treatment. That way, the duration of sorafenib treatment is very long, 38 weeks, compared with…12 weeks or 15 weeks, much longer than the 3 previous studies. Those long treatment durations with sorafenib stabilize the tumor activity, then prolong the progression. The primary end point of PFS showed that the hazard ratio is 0.59, with primary mRECIST. With updated mRECIST, the hazard ratio is 0.66, the P value is still significant. This is a first-ever positive study of the combination of TACE and sorafenib.

The reason for success of this study is pretreatment with sorafenib before TACE for 2 to 3 weeks to suppress the hypoxia-inducible cytokine for VEGF or angiopoietin-2, and treatment duration was long because of the different definition of progression. We did not apply the RECIST criteria; a new lesion is not regarded as progression. Then we can repeat the protocol treatment.

In this TACTICS trial, the numbers of patients are small. We presented updated OS data at ASCO GI [American Society of Clinical Oncology Gastrointestinal Cancers Symposium], and the OS data were negative because subsequent therapy after the TACE-alone group is nearly 80%. For 50%, sorafenib was introduced. Then the other tyrosine kinase active agent was introduced. But the hazard ratio is 0.8. The longest OS was obtained, 36 months, in the combination arm, and the TACE-alone arm is 30 months. Six months prolongation of OS was never achieved in previous studies. Even though it was an underpowered study, statistically not significant, but numerically, 36-month survival—this trial showed a benefit of the combination because of the 6-month difference in OS and the longest OS, 36 months. Also, the PFS is consistent with primary analysis.

I think this TACTICS trial implies many things. The combination with systemic therapy benefits the clinical outcome, like PFS and maybe OS. Also, OS is statistically negative. So in this era of many targeted agents, and immunotherapy like nivolumab/pembrolizumab, which is approved after sorafenib, in intermediate stage HCC, an OS end point is very difficult. Maybe it’s not possible to show an OS benefit in intermediate stage TACE combination trials.

2021: The Year of Advances in Unresectable HCC?Gastrointestinal Cancer 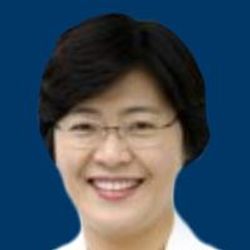