During a recent OncLive Peer Exchange®, experts in breast cancer research expressed optimism that new therapies would improve outcomes for patients with this challenging disease. 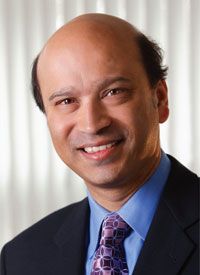 One new agent is an antibody-drug conjugate that links the anti-HER2 antibody fam-trastuzumab to deruxtecan-nxki, a cytotoxic topoisomerase I inhibitor.3 In December 2019, the FDA approved trastuzumab-deruxtecan (Enhertu) for HER2-positive unresectable or metastatic breast cancer (MBC) refractory to 2 or more anti-HER2—based regimens.4 Other emerging agents include tucatinib and margetuximab, both of which inhibit the HER2 tyrosine kinase but use different mechanisms. In patients with heavily pretreated HER2-positive MBC,2,5 tucatinib and margetuximab significantly enhanced progression-free survival (PFS) versus placebo.2,5

The panel discussed compelling data for these agents presented at the 2019 San Antonio Breast Cancer Symposium (2019 SABCS). “These are really practice-changing findings for our population of patients with advanced HER2-positive breast cancers…a landslide of change, I guess we could say,” said moderator Debu Tripathy, MD.

Pathological complete response (pCR), a common primary end point in clinical trials of neoadjuvant therapy for HER2-positive breast cancer, is defined as the absence of residual invasive disease (and/or in situ cancer) in the resected breast specimen and sampled lymph nodes following neoadjuvant therapy.6 Multiple studies of chemotherapy plus a HER2-targeted agent have shown that failure to achieve pCR after neoadjuvant therapy significantly increases the risk of recurrence or death.6,7 Tripathy noted that oncologists have struggled with how to address residual disease in these patients but that recent data offer “actionable therapies… options that are now impacting outcomes.”

At a median follow-up of 41 months, patients treated with T-DM1 were 50% less likely to experience recurrence of invasive breast cancer or death than patients treated with trastuzumab (P <.001).7 Tripathy said it was interesting “the outcome was so much better in the T-DM1—based treatment group.” The results led the FDA to expand indications for T-DM1 in May 2019 to include patients with early-stage HER2-positive breast cancer and residual invasive disease after neoadjuvant therapy.8

Joyce A. O’Shaughnessy, MD, said that although the OS hazard ratio of 0.85 in the pertuzumab arm was not significant, it was “trending in the right direction.” OS data were still immature at the time of presentation. For the primary end point of invasive disease-free survival (iDFS), updated 6-year data showed a difference of 2.8% between the pertuzumab and placebo arms (90.6% vs 87.8%, respectively; HR, 0.76).10 O’Shaughnessy said that whereas 3-year iDFS rates showed patients with hormone receptor—negative disease derived greater benefit from pertuzumab than those with hormone receptor–positive disease, updated rates showed both groups benefited.

The 6-year results showed that patients with node-positive but not node-negative disease benefited from pertuzumab (iDFS HR, 0.73 vs 0.83, respectively).10

O’Shaughnessy said the findings complicate treatment decisions because when pertuzumab is administered as part of neoadjuvant therapy, the FDA label calls for continuing pertuzumab as adjuvant therapy for up to 18 cycles.11 O’Shaughnessy asked the panel: “If somebody is clinically node-negative…do we use preoperative pertuzumab? If patients have T2 or above, but then they have a pCR and you don’t see any fibrosis in the lymph node, do you continue with the full year of trastuzumab and pertuzumab, or do you just go with trastuzumab?”

Hope S. Rugo, MD, FASCO, said she would still administer pertuzumab as adjuvant therapy to someone with node-negative disease because “previous studies have suggested that there’s a lot of occult node-positivity we’re somehow missing.” She added that she would be unlikely to continue pertuzumab in a patient who achieves a pCR but would for someone with “a lot of bulky disease” after neoadjuvant therapy. Adam M. Brufsky, MD, PhD, indicated he would proceed straight to surgery for a T1 tumor and select an alternative adjuvant regimen for node-negative disease. For a tumor T2 or greater, Brufsky said he would administer neoadjuvant pertuzumab and continue it even if a patient had a pCR at resection.

The panel reviewed data from 2 phase II trials of anti-HER2 adjuvant therapy in patients with HER2-positive low-risk breast cancer.12,13 The APT trial (NCT00542451) assessed adjuvant paclitaxel/ trastuzumab in 400 patients who had node-negative disease with tumors ≤3 cm,12 whereas ATEMPT (NCT01853748) compared T-DM1 versus paclitaxel/trastuzumab in 500 patients with stage I disease.13,14 In 2019, Tolaney and colleagues published long-term results from the APT trial that O’Shaughnessy called “really spectacular.” At 7 years, disease-free survival (DFS) was 93%, OS was 95%, and 98% of patients obtained recurrence-free survival.12

The other primary end point was a comparison of clinically relevant toxicities between the treatment arms.13 Ian E. Krop, MD, PhD, an ATEMPT investigator, said 46% of patients in each arm developed clinically relevant toxicities but that toxicity profiles differed between treatments.14 “There was obviously more alopecia, neuropathy, and neutropenia with paclitaxel/trastuzumab; and there were more liver function test [result] abnormalities, thrombocytopenia, and early discontinuation before 1 year with T-DM1,” Krop said. Despite the higher incidence of neurotoxicity in the paclitaxel/trastuzumab arm, patients in the T-DM1 arm were nearly 3 times as likely to discontinue because of toxicities.14 “T-DM1 was not dramatically better tolerated than paclitaxel/trastuzumab, so I think it’s hard to justify saying T-DM1 should be the new standard for stage I HER2- positive breast cancers based on these data,” Krop said.

No standard of care exists for patients with HER2-positive advanced disease who are refractory to pertuzumab/trastuzumab and T-DM1, said Krop. He called it “the biggest unmet need in metastatic HER2-positive disease right now.” Data from clinical trials of several novel therapies in this population were presented at 2019 SABCS, which the panelists agreed were likely to change practice (Table2,5-19).

Like T-DM1, trastuzumab deruxtecan is an antibody-drug conjugate that links the antibody trastuzumab to a cytotoxic agent, which is the “payload.”15 Whereas T-DM1 uses a noncleavable linker to ensure the payload remains bound to trastuzumab even after the drug enters HER2-positive cells, trastuzumab deruxtecan uses a cleavable linker.15 Krop explained that this means once the drug enters a HER2-positive cell, the payload—deruxtecan&mdash;can separate from trastuzumab and “diffuse out of the cell and hit neighboring cells,” some of which may express low or even normal levels of HER2.15 He proposed that the “bystander effect” and the use of deruxtecan, a potent topoisomerase I inhibitor, may result in less resistance than observed with T-DM1.

Trastuzumab deruxtecan was evaluated in DESTINY-Breast01 (NCT03248492), a singlearm phase II study that included 184 adults with HER2-positive MBC previously treated with trastuzumab and T-DM1.3,16 Most patients had also received at least 1 other systemic therapy.

The objective response rate (ORR) was 61%, median duration of response was 14.8 months, and median PFS was 6.4 months.3 Krop, an investigator for the trial, said “those numbers are roughly double or triple what’s been seen in historical controls, so this is clearly an effective agent.” The most common adverse events (AEs) grade ≥3 were decreased neutrophil count, anemia, and nausea.3

Approximately 14% of patients developed interstitial lung disease. Krop said although most cases were low grade and manageable, 4 patients died. “We have to figure out how to manage the pneumonitis that’s associated with trastuzumab deruxtecan, but overall it’s a clear win for patients,” he said.

Tucatinib is an oral tyrosine kinase inhibitor that targets HER2.2 “The interesting thing about tucatinib is that, unlike lapatinib [Tykerb] and neratinib [Nerlynx], it does not block the epidermal growth factor receptor, so you do not get nearly as much diarrhea and rash,” said Krop, an investigator for the HER2CLIMB trial (NCT02614794) of tucatinib. Krop said tucatinib also crosses the blood-brain barrier, which allowed patients with stable brain metastases to participate in the phase II trial.

HER2CLIMB enrolled 612 patients with HER2-positive MBC previously treated with trastuzumab, pertuzumab, and T-DM1.2 They were randomly assigned to trastuzumab plus capecitabine and either tucatinib or placebo.2 The primary end point was median PFS for the first 480 patients treated, which reached 7.8 months in the tucatinib arm versus 5.6 months in the placebo arm. Krop said the hazard ratio for disease progression or death was 0.54 (P <.001).

In the total population, tucatinib was associated with longer OS and a 34% reduction in the risk of death compared with placebo (HR, 0.66; P = .005).2 “We do not typically see survival benefits so early,” Krop said. In the subset of patients with brain metastases, the risk of disease progression or death was 52% lower for patients treated with tucatinib than for those given placebo (HR, 0.48; P <.0001).2

Tucatinib was well tolerated. The most common treatment-related AEs were diarrhea, palmar-plantar erythrodysesthesia syndrome, nausea, fatigue, and vomiting. Tripathy pointed out that the discontinuation rate was low.

Krop said tucatinib appeared to be an effective third-line option, especially for patients with brain metastases. O’Shaughnessy called tucatinib a “game-changer because of its survival advantage.” She and Rugo agreed that, if tucatinib is approved, they would likely use it after progression with T-DM1.

Rugo was a lead investigator for the phase III SOPHIA study (NCT02492711), which evaluated margetuximab in 536 patients with HER2-positive MBC that progressed after 2 or more lines of anti-HER2 therapy.5 Although margetuximab and trastuzumab have similar affinity for the HER2 receptor, margetuximab was engineered to have greater affinity for the activating Fc receptor CD16A alleles 158V (high binding) and 158F (low binding) and decreased affinity for the inhibitor Fc receptor CD32B.5,17 Approximately 85% of patients with HER2-positive metastatic disease have the CD16A-158F allele, which is associated with a reduced response to trastuzumab.17

Approximately half of the patients in each arm experienced grade ≥3 AEs.18 The rate of serious AEs was also similar between the margetuximab and trastuzumab arms (16.3% vs 18.4%, respectively). Patients treated with margetuximab were much more likely to experience an infusion-related reaction than patients treated with trastuzumab (13% vs 3%), but most cases were mild.18

The improved clinical benefit observed with margetuximab appeared to be enhanced in patients who carried a low-binding CD16A- 158F allele.17 However, in a subset of 69 patients homozygous for the high-binding CD16A-158VV alleles, trastuzumab was associated with better outcomes than margetuximab.18 Rugo expressed a lack of confidence in the finding, noting that patients in the subset who took margetuximab tended to be older and have more sites of metastatic disease than those treated with trastuzumab.

Rugo said it was premature to discuss where margetuximab might fit in the treatment algorithm. She said she looked forward to data from a planned neoadjuvant trial of margetuximab in patients with the 158F allele. She said although it would be interesting to combine margetuximab with other immune-active agents such as an LAG3 inhibitor, she expected it would first be approved for MBC in combination with chemotherapy. MacroGenics, Inc, the biopharmaceutical company developing margetuximab, has already submitted a biologics license application to the FDA seeking approval of margetuximab based on results from the SOPHIA trial.19

At 2019 SABCS, investigators for the multicenter phase III APHINITY trial (NCT01358877) presented 6-year overall survival (OS) data.9,10 The APHINITY trial is assessing whether the addition of pertuzumab (Perjeta) to adjuvant trastuzumab plus chemotherapy improves survival outcomes and reduces the risk of recurrence in patients with early-stage HER2-positive breast cancer.9 Patients were randomly assigned to trastuzumab/ chemotherapy plus 1 year of either pertuzumab (n = 2400) or placebo (n = 2405).10