Driven by advances in genetic testing methods and the discovery of actionable mutations beyond BRCA, an update to the National Comprehensive Cancer Network’s Guidelines for genetic testing in breast, ovarian, and pancreatic cancers encompasses a much broader range of genes that predict risk for disease occurrence. 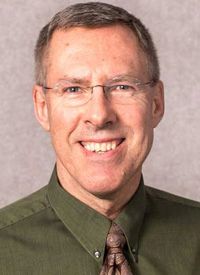 Driven by advances in genetic testing methods and the discovery of actionable mutations beyond BRCA, an update to the National Comprehensive Cancer Network’s (NCCN’s) Guidelines for genetic testing in breast, ovarian, and pancreatic cancers encompasses a much broader range of genes that predict risk for disease occurrence.

“The big shift here was a conscious movement away from a BRCA-centric set of guidelines. These guidelines were started back in 1999, shortly after the BRCA genes were [identified], and the guideline stayed tied to BRCA because, for a long time, that’s all we had,” said Robert Pilarski, MS, MSW, LGC, LSW, vice chair of the NCCN Guidelines panel.

The advent of multigene panel testing also contributed to the NCCN’s decision to revisit this guideline for genetic testing, according to Pilarski, a licensed genetic counselor and an associate professor of Human Genetics at The Ohio State University Comprehensive Cancer Center in Columbus.

“People no longer test a single gene at a time but rather test a set of genes. [This approach] increases efficiency and the number of mutations that are detected,” Pilarski said. “Most people are doing panel testing these days, and guidelines need to reflect that.”

The update expands the BRCA mutation emphasis of the early guideline to include other high- and moderate-penetrance genes associated with breast, ovarian, and pancreatic cancers, such as ATM, CDH1, CHEK2, and CDKN2A (Table).1 Genes associated with increased susceptibility of other cancers, such as prostate cancer, are also outlined, as are methods for addressing variants of unknown significance (VUS). VUS are a common result of multigene panel testing, according to Pilarski.

“Not all of the genes that we test for have the same amount of information available about them, so we don’t have as clear an understanding of how to manage some of them or what the risks are compared with other [genes] that are well understood, such as BRCA,” Pilarski said.

Somatic TP53 and PTEN alterations that are known or likely to be pathogenic are common in many tumor types in which no germline variant is present, the guideline notes. If tumor genomic testing and germline testing identify a TP53 or PTEN variant, the clinician should evaluate the individual’s personal and family history to determine the value of germline sequencing.1

Somatic genomic testing is frequently used to identify mutations that can be targeted with precision therapies. In contrast, germline testing, which probes for inherited genetic variants, can help predict an individual’s future risk of developing cancer, regardless of whether the individual has cancer at the time of germline evaluation.2

The latest iteration of the guideline organizes the panel’s recommendations by disease and syndrome and includes streamlined information on the best testing practices for patients who meet the criteria for genetic testing. Importantly, the guideline now states that testing may be clinically indicated if it will aid in systemic therapy decision making.1

The integration of the “abundance of new data” on inherited risk factors for pancreatic cancer is a critical component of the update, according to NCCN panel member Matthew B. Yurgelun, MD.

“There’s been an explosion of new data as they relate to genetic testing in individuals with pancreatic cancer. Just a few years ago, we thought 1%, maybe 2%, of pancreatic cancer cases could be attributed to specific hereditary abnormalities. Nowadays, we think that may be upward of 10% in some cases,” said Yurgelun, who is the director of the Lynch Syndrome Center at the Dana-Farber Cancer Institute in Boston, Massachusetts. Therefore, guiding clinicians on how to incorporate “all this exciting new information into day-to-day care” was a priority of the panel, Yurgelun said.

Pancreatic cancer—associated genes that are typically tested are ATM, BRCA1/2, CDKN2A, PALB2, STK11, and TP53, as well as most Lynch syndrome genes, including MLH1, MSH2, MSH6, and EPCAM.

The guideline also identifies genes for which the risk of pancreatic is currently unknown or the evidence is insufficient to conclusively predict risk. These genes include BARD1 and BRIP1.1 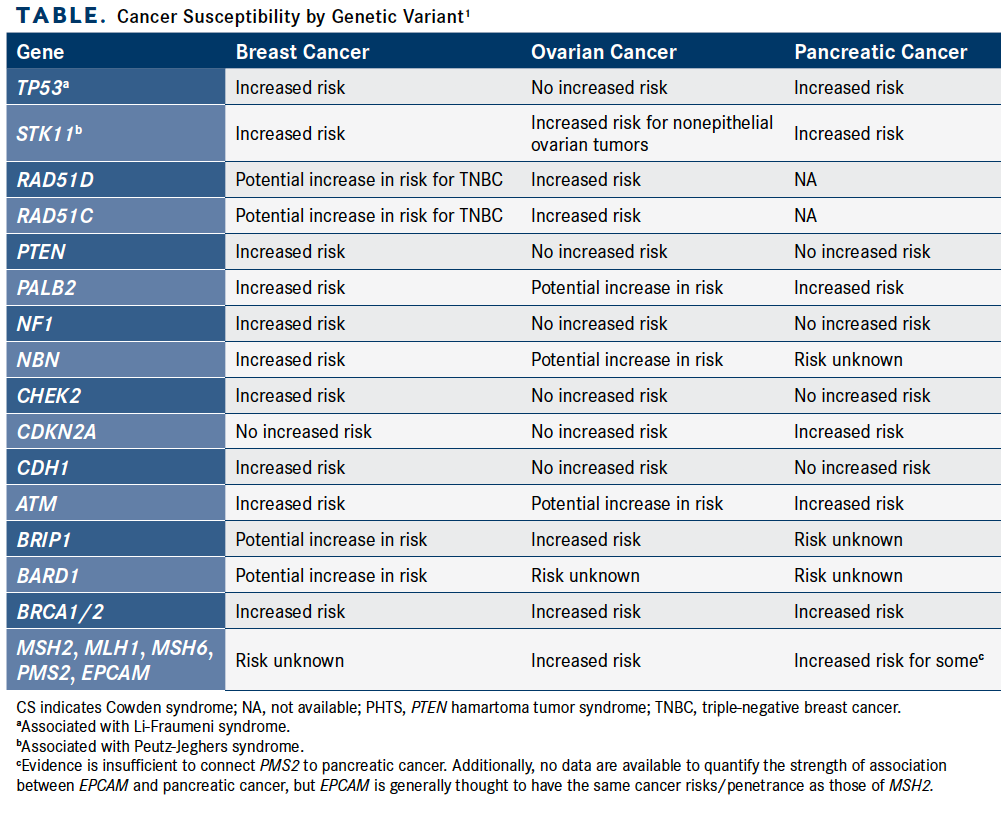 Although the NCCN and practitioners in the field of pancreatic cancer have a grasp of the genes commonly associated with this disease, Yurgelun said, further study is needed to answer lingering questions such as how high or low the risk is with a genetic anomaly.

The uncertainty that persists in pancreatic cancer, as well as in disease settings such as breast cancer, prompted the NCCN to take a conservative approach to recommending testing for genes of unclear significance. An example, Pilarski said, is the RAD gene in breast cancer.

“There is some evidence suggesting a connection with breast cancer, particularly triple-negative breast cancer, but at this point, the data are not strong enough to determine whether we should act on that and what we should do if it’s actionable,” Pilarski said. “In this guideline, we acknowledge that data [are accumulating] and note that we consequently cannot set any kind of management recommendations at this point.”

Clinicians should consult the NCCN Guidelines for Neuroendocrine and Adrenal Tumors if a patient receives a diagnosis of neuroendocrine pancreatic tumors. For all individuals with exocrine pancreatic cancer, the NCCN recommends genetic counseling and germline testing. Clinicians should test first-degree relatives, defined as parents, siblings, and children, only if testing the patient is not possible. Some seconddegree relatives (grandparents, aunts, uncles, nieces, nephews, grandchildren, and half-siblings) may be tested if first-degree family members are not available, but testing eligibility will be based on additional family history, the guideline states.1

When testing criteria are met, the clinician should take several preliminary steps before the evaluation: Counsel the patient on risk and the genetic testing process, perform a psychosocial assessment of the patient, and obtain informed consent. The next stage in the genetic testing algorithm will depend on whether a known or likely pathogenic variant is present in the patient’s family history.

If one is present, the clinician should suggest testing for the specific known familial pathogenic or likely pathogenic variant. If the result is positive, review of the particular gene(s) is necessary to determine the risk for cancer; if negative, the clinician should conduct cancer screening in accordance with NCCN guidelines. Clinicians should also purse cancer screening if patients choose not to undergo testing. In such cases, clinicians should “consider screening as if positive.”1

Although understanding mutationspecific risk for pancreatic cancer requires further investigation, screening is another area in need of elucidation. However, the NCCN’s choice to address pancreatic cancer screening in this guideline for the first time emphasizes its clinical potential, according to Yurgelun.

“Until recently, there really was no such thing as screening for pancreatic cancer, and over the past 5 or 6 years, there have been a lot of data coming out about the potential benefits of screening,” Yurgelun said.

Although “a lot of limitations and uncertainties” remain regarding best practices for pancreatic cancer screening, the modality has the potential to yield important, care-influencing insight, particularly as its optimal use is further refined, Yurgelun added.

If there is not a known pathogenic or likely pathogenic variant in the individual’s family, clinicians may consider comprehensive testing of the patient with a multigene panel. Alternatively, if possible, the clinician might test the family member with the highest likelihood of a variant before testing an unaffected relative. If the result is positive, review of the particular gene(s) is necessary to determine the risk for cancer.

Conversely, if the patient is not tested or if the test returns a variant of unknown significance, or if no pathogenic variant is found, best practice is to offer individualized recommendations predicated on personal and family history. Clinicians should manage patients who meet the criteria for CS/PHTS as likely or known carriers of a PTEN pathogenic or likely pathogenic variant.1

Another key change to the NCCN guideline is the inclusion of new and expanded information on risk assessment and management, namely in individuals of Ashkenazi Jewish ancestry, who have an elevated chance of pancreatic cancer and breast cancer occurrence. Prior research has shown that individuals of this ethnic background also are more likely to test positive for a BRCA1/2 mutation.

The NCCN states that clinicians may consider testing 3 founder variants of BRCA1/2 in individuals of Ashkenazi Jewish ancestry who have not been diagnosed with cancer.

“We’re still learning what the magnitude of pancreatic cancer propensity is for many of these genes, and we’re also trying to get a better sense of which individuals with these mutations might be at a particularly high risk,” Yurgelun said.