Three-quarters of all cases of lung adenocarcinoma, the most common type of non–small cell lung cancer (NSCLC), are defined by oncogenic driver events involving receptor tyrosine kinase–orchestrated cellular signaling pathways.1,2 Armed with this knowledge, investigators have increasingly divided NSCLCs into subsets based on the presence of targetable aberrations, paving the way for an era of personalized medicine.3

Since the MET receptor’s carcinogenic role in lung cancer was first described in the 1990s, research efforts to add the receptor to the list of actionable targets in NSCLC often have faltered. Despite the strong rationale behind their development, a host of MET inhibitors with varied mechanisms of action failed to impress in clinical trials.4-8

In the past year, however, the identification of biomarkers permitting optimal patient selection has proved to be the key to success. The FDA has approved 2 MET inhibitors, capmatinib (Tabrecta) and tepotinib (Tepmetko), for the treatment of patients with advanced NSCLC harboring MET exon 14 skipping mutations.9,10 These mutations, which vary across major histological subtypes, have been detected in approximately 4% of adenocarcinomas.1,4

Meanwhile, a greater understanding of aberrant MET signaling may help in the development of additional strategies (TABLE). MET dysregulation not only is a primary oncogenic driver in NSCLC but also is strongly implicated in resistance to targeted therapies in other patient subpopulations, most notably in those treated with EGFR inhibitors.7,8

Ongoing clinical trials are examining MET and EGFR inhibitor doublet therapy in an effort to overcome this mechanism of resistance, and recent data paint a promising picture of this type of combination therapy.11-13

As an alternative to this strategy, several companies are pursuing MET x EGFR bispecific antibodies to target both pathways with a single drug. In May, one such drug, amivantamab-vmjw (Rybrevant), became the first agent to gain FDA approval for the treatment of patients with EGFR exon 20 insertion mutations, another mechanism of resistance to EGFR inhibition.14 Investigators are also examining amivantamab for the treatment of patients with NSCLC whose tumors harbor MET exon 14 skipping mutations.15 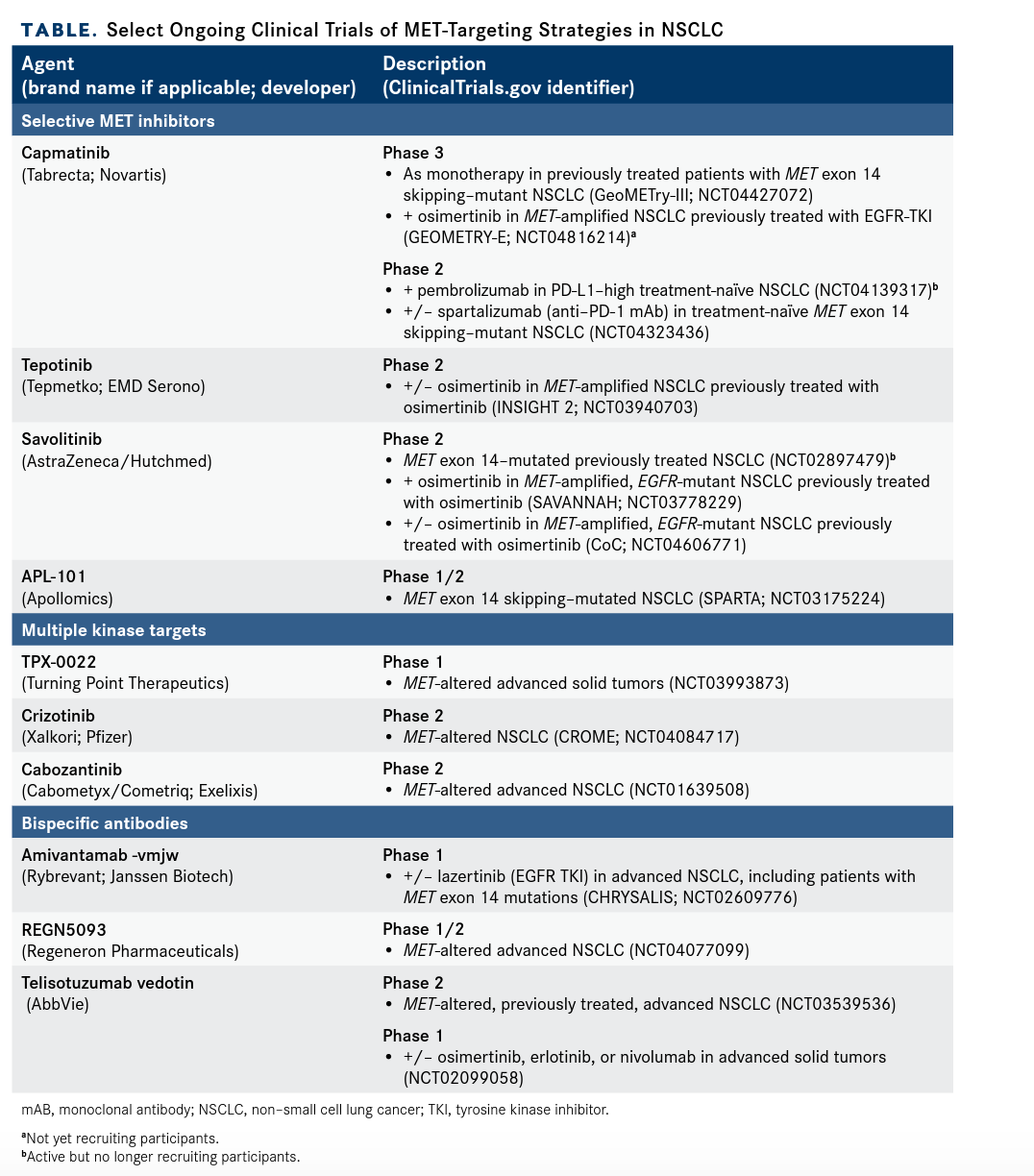 Dysregulation of the MET pathway, which occurs across a number of cancer types besides NSCLC, manifests in a variety of ways, from protein overexpression to gene amplification and various types of mutation, and more rarely as gene fusions. In addition to its primary oncogenic role, aberrant MET signaling appears to be a secondary driver of resistance to EGFR inhibitors in NSCLC.7,8

For more than a decade, considerable effort has been invested in generating MET-targeting drugs with a variety of mechanisms of action. Among them are multitargeted tyrosine kinase inhibitors such as crizotinib (Xalkori) and cabozantinib (Cabometyx/Cometriq), MET-specific inhibitors such as tivantinib, MET-targeted antibodies including onartuzumab, and antibodies targeting the MET ligand HGF such as ficlatuzumab and rilotumumab.7,8

Multikinase inhibitors generally have failed to improve outcomes in patients with NSCLC. Early clinical trials of these and other MET inhibitors were conducted mainly in unselected patient populations, but even in patients selected for MET overexpression, as measured by immunohistochemistry (IHC), the results were disappointing.4-8

Yet MET inhibitors continue to be pursued. Among them are several drugs with novel mechanisms of action, such as telisotuzumab vedotin, an antibody-drug conjugate composed of a MET-targeted antibody conjugated to the cytotoxic drug monomethyl auristatin E.16

Results from an ongoing phase 2 trial of telisotuzumab vedotin in patients with MET-positive advanced NSCLC (NCT03539536) were presented at the American Association for Cancer Research Annual Meeting 2021 in April. In patients with squamous NSCLC, MET positivity was defined as IHC staining of at least 75% of tumor cells at 1+ intensity. In nonsquamous NSCLC, positive MET staining was further divided into high (≥ 50% at 3+) and intermediate levels (25%-49% at 3+).16

Although MET protein overexpression is the most common manifestation of MET dysregulation in NSCLC and is associated with poor prognosis, it has not proved to be an effective biomarker of response to MET inhibitors in most cases.7,8

Recently, a heterogeneous group of muta-tions that lead to loss of MET exon 14, which results in MET activation by impair-ing MET protein degradation, has emerged as a better biomarker of response to MET inhibitors in NSCLC.

Following multiple case reports of patients with MET exon 14–mutant NSCLC responding to MET inhibitors17 and positive preliminary results from an expansion cohort of the PROFILE 1001 trial of crizotinib in patients with MET exon 14 mutations (NCT00585195),18 numerous clinical trials were launched to evaluate MET inhibitors in this patient population.

Most notably, research efforts in MET exon 14–mutant NSCLC have recently culminated in the approvals of 2 novel selective MET inhibitors. Capmatinib became the first FDA-approved MET inhibitor in May 2020, based on results of GEOMETRY Mono-1 trial (NCT02414139), a multicohort trial in patients with MET-dysregulated NSCLC.9

The phase 2 study included 97 patients with MET exon 14 mutations, 69 of whom had received 1 or 2 prior lines of therapy and 28 of whom were treatment naïve. Patients were treated with capmatinib 400 mg twice daily.

The ORR was 41% (95% CI, 29%-53%) in previously treated patients and 68% (95% CI, 48%-84%) when capmatinib was used in the front line, with a median duration of response (DOR) of 9.7 months and 12.6 months, respectively. The most common AEs among all study patients were peripheral edema, nausea, and vomiting, which were predominantly grade 1 or 2.20 The FDA also approved FoundationOne CDx, a next-generation sequencing–based assay, as a companion diagnostic to identify patients with MET exon 14 skipping mutations who are eligible for treatment with capmatinib.9

According to a primary analysis of data from cohort A, which enrolled patients with MET exon 14 skipping mutations, 99 patients had been followed for at least 9 months at the cutoff of January 1, 2020. The ORR by independent review was 46% (95% CI, 36%-57%) for these patients. ORRs were comparable between patients whose mutation status was determined by liquid biopsy (ORR, 48%) vs tissue biopsy (ORR, 50%). The most common AEs included peripheral edema, nausea, and diarrhea; peripheral edema was the most common AE of grade 3 or higher.21

Tepotinib therapy also demonstrated clinical benefit in patients with brain metastases treated during the VISION trial, according to findings presented at the 2021 American Society of Clinical Oncology (ASCO) Annual Meeting. Among 23 patients who were part of cohort A, the ORR was 47.8% (95% CI, 51.6%89.8%) by RECIST v1.1 criteria.23

Savolitinib is another MET inhibitor in development in patients with MET exon 14 skipping–mutant NSCLC. AstraZeneca, which is developing this drug, entered into a global licensing and joint development and commercialization agreement with Hutchmed (formerly Hutchison China MediTech Limited) in 2011.24

According to phase 2 trial (NCT02897479) data presented at the 2020 ASCO Virtual Scientific Program, savolitinib elicited an ORR of 49.2% by independent review in 61 response-evaluable patients with MET exon 14–mutant NSCLC. Investigators administered savolitinib orally, once daily, on a weight-based schedule (600 mg for patients weighing ≥ 50 kg and 400 mg for those < 50 kg). The most common treatment-related AEs included peripheral edema, nausea, increased alanine and aspartate aminotransferase levels, vomiting, and hypoalbuminemia.25 These data served as the basis for the recent submission of a new drug application to the Chinese regulatory authorities.24

The combination of tepotinib and the EGFR inhibitor gefitinib (Iressa) was evaluated in comparison with standard platinum doublet chemotherapy in phase 2 of the INSIGHT trial (NCT01982955). Eligible patients had EGFR-mutant, T790M-negative, MET-altered NSCLC, with MET alteration defined as protein overexpression (IHC 2+ or 3+) or gene amplification.

The trial was terminated early due to low recruitment. However, preplanned analyses demonstrated that although survival outcomes did not differ between the 2 groups overall, subsets of patients with high (IHC 3+) MET overexpression or MET amplification had improved median PFS and overall survival (OS) vs the chemotherapy group. For patients with MET amplification and EGFR inhibitor resistance, the median PFS was 16.6 months with tepotinib vs 4.2 months with chemotherapy (HR, 0.13; 90% CI, 0.040.43) and median OS, respectively, was 37.3 vs 13.1 months (HR, 0.08; 90% CI, 0.01-0.51).12

In the INSIGHT 2 trial (NCT03940703), investigators are evaluating the combination of tepotinib and osimertinib in patients with MET-amplified, EGFR-mutant NSCLC who had progressed on first-line osimertinib.

An alternative strategy in clinical development is the use of bispecific antibodies targeting EGFR and MET simultaneously. Amivantamab has demonstrated significant promise in the treatment of patients with EGFR exon 20 insertion mutations, another mechanism of acquired resistance to EGFR inhibitors.

GFR inhibitors. The FDA approved the drug for patients with locally advanced or metastatic NSCLC with the EGFR exon 20 mutation based on findings from the ongoing phase 1 CHRYSALIS trial (NCT02609776). Participants received amivantamab at 1050 mg (weighing < 80 kg) or 1400 mg (weighing ≥ 80 kg). Among 81 patients who had received prior platinum-based chemotherapy, the ORR was 40% (95% CI, 29%-51%), including 3 CRs, and the median DOR was 11.1 months.14 In a different part of the CHRYSALIS trial, investigators are evaluating amivantamab in patients with MET exon 14 skipping mutations.15