In this seventh episode of OncChats: Immunotherapy and You, John Nakayama, MD, and Ali Amjad, MD, walk through a timeline of FDA approvals of immunotherapy approaches in gynecologic oncology and discuss associated toxicities to be aware of as well as how to manage them.

EP: 2.Immunotherapy and You: Gynecologic Treatment Efficacy From a Patient’s Perspective

EP: 3.Immunotherapy and You: The 5 Cs in Gynecologic Cancer

EP: 5.Immunotherapy and You: Understanding the PD-L1 Blockade

EP: 6.Immunotherapy and You: Checkpoint Inhibitors in Gynecologic Cancers

In this seventh episode of OncChats: Immunotherapy and You, John Nakayama, MD, of the Division of Gynecologic Oncology, Allegheny Health Network, and assistant professor of OBGYN at Drexel University, and Ali Amjad, MD, medical hematologic oncologist, Allegheny Health Network, walk through a timeline of FDA approvals of immunotherapy approaches in gynecologic oncology and discuss associated toxicities to be aware of as well as how to manage them.
Nakayama: Wonderful. Now that we've talked about [the difference between] mismatch repair–deficient [and] mismatch repair–stable [disease], can you take me through the timeline of FDA approvals?

Amjad: In 2018, we saw the first approval in gynecologic oncology with pembrolizumab [Keytruda] used as a second-line treatment in cervical cancer. Since then, we've seen other approvals where combination immunotherapy with a TKI, lenvatinib [Lenvima], has been approved for endometrial cancer.

Dostarlimab [Jemperli] is another PD-1 agent that is approved for endometrial cancer, in a biomarker-selected population, as a single agent. Then, more recently, we've had a combination of chemotherapy plus immunotherapy and an antiangiogenic, bevacizumab [Avastin], approved in cervical cancer.

Nakayama: I think now you can see this. This is the progression, right? We were looking at this relatively small population, this population of 20% to 25%, that was mismatch repair deficient, and then this trial came out that looked at a TKI plus pembrolizumab. Can you tell me about KEYNOTE-775? Tell me a little bit about who [the patients] were and what was being looked at.

Amjad: KEYNOTE-775 was a phase 3 clinical trial for patients with endometrial cancer who have progressed on platinum-based chemotherapy. [Patients] were enrolled to [1 of] 2 arms: 1 arm being the combination of pembrolizumab and lenvatinib, and the other being standard-of-care chemotherapy with doxorubicin or paclitaxel.

This matters a lot for patients, because when these patients [come in,] they're really sick; they have a lot of pain, bleeding, weight loss, abdominal symptoms, [and other] gastrointestinal problems. When you talk about the response rate being twice as high as chemotherapy, these patients start feeling better right away, and more of them start feeling better. That is important to remember in the beginning.

[There are adverse] effects [AEs], but they may be different from traditional chemotherapy, where patients have alopecia and nausea; patients may have less of a problem with [the immunotherapy] combination.

Nakayama: I think you're 100% right about that. The overall response rate was really interesting. The fact that we got OS improvement is massive, because a lot of the times we're just working off of [what we know about the] progression-free [survival benefit]. The other thing that I couldn't fit onto the slide is that a lot of people on this trial had high-grade serous, clear cell cancer.

At least in my practice, I have found those people to be harder to treat and to have more aggressive disease than [others]. In [your practice,] have you seen similar responses to what this trial shows in [patients with] those high-risk histologies?

Amjad: Yeah, certainly. This was a good trial where they included those rare histologies, as well. Clear cell [tumors], as we know, are really tough to treat, and all of them did have a response with this combination.

Nakayama: Awesome. Great. So, you mentioned it before, this regimen does have some AEs. Most people will have a grade 3 or 4 AE, and there were some grade 5 AEs and fatal AEs. In your practice, what do you think are the most common AEs and what is your way of dealing with those, in terms of dose interruptions and whatnot?

Amjad: Yeah, we know that when we combine these 2 therapies, immunotherapy and a TKI, they have some overlapping toxicities, but they have different sets of toxicities, as well. Hypertension seems to be a common AE from lenvatinib; that may not necessarily bother patients, but we do follow that closely. Fatigue seems to be a big AE. Myalgias, muscle aches, [and then] weight loss is a common AE from lenvatinib treatment. Of the overlapping toxicities, diarrhea is a common one, and that is sometimes hard to tease out because immunotherapy can cause diarrhea from immune inflammation or colitis, and lenvatinib was a diarrhea just from a cytotoxic effect, as well.

It's always tricky to see which [drug] is causing which [toxicity]. I'm pretty open in terms of trying to hold the lenvatinib, reducing the dose, so that we can continue that treatment and restart the treatment as soon as the patients have recovered from the toxicity. As you can see, on these clinical trials, most of these patients had to have a dose reduction and some of them even had to discontinue treatment because of toxicity.

Nakayama: I think you made a couple of really great points there. I've always found the diarrhea to be the hardest [toxicity] to deal with, because you don't know if it's immune or if it's the TKI. You don't want to be the person who kept them on treatment and let the immune colitis get worse, so that is a clinical conundrum.

I'm curious, what I do in these people is, when I'm starting the combination, I make sure that they're well set up with their primary care doctor. I basically tell them that they're going to get hypertension, and that they need to be ready for that. I don't know about you, but I also try to make sure that they have an antiemetic prescription, and even sometimes antidiarrheals. Is that the approach that you take or do you do anything extra?

Amjad: You have to be preventive with these treatments and toxicities, and [ensure that] patients are prepared for it. I typically call them back in 1 week after they start, just to check in and see how things are going, because it's really in the first [or second week that] they [will experience] these toxicities. We have a low threshold to hold treatments. Hydration, nausea control, certainly education, and our nurses come in handy. They do call these patients very frequently to check in on them. As we get in the flow, after the second or third month, patients know how to handle them and they do report anything out of the [ordinary].

Nakayama: I think that's super important. I love that check-in idea; I think that could be very helpful, because we know that they're going to have AEs with this and managing them is absolutely critical. In traditional cytotoxic chemotherapy, we give it every 3 weeks, every 2 weeks, every 4 weeks. Just the fact that [patients need to] take the TKI every day, I wonder if people have an issue with just that lack of a break. I do use dose interruptions every so often for that. What do you think about the lack of a break? What do you think about dose interruptions?

Amjad: I'm open to those concepts of reducing the dose and stopping it for a little bit. That is kind of how practice runs. In clinical trials, patients did have dose reductions, as well. So those are things that can help keep them on the medicine because the last thing you want to do is to have a toxicity that [makes the] patients [never want to try something] again. So starting low, and then maximizing the dose, is what I usually do.

Nakayama: Dr Amjad, I really want to thank you for taking the time to chat today. At least for me, my takeaways of what you've taught me is that immunotherapy is becoming another important line of treatment within cancer care. What is your takeaway of immunotherapy, not just in gynecologic oncology, but in oncology altogether?

Nakayama: That's wonderful. Well, thank you everyone for listening to this episode. We'll catch you with our next series. 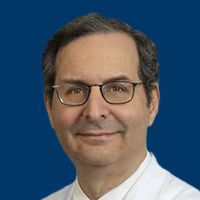