Since most diagnoses of esophageal squamous cell carcinoma are made when the disease is in advanced stages, investigators have initiated studies to evaluate the efficacy of immunotherapy in earlier lines of therapy, including in combination with chemoradiotherapy. 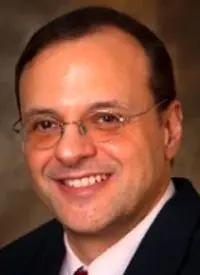 Esophageal squamous cell carcinoma (ESCC) represents the most common type of esophageal cancer, accounting for approximately 90% of cases globally. Yet the disease has been understudied with little progress toward treatment advancement.1

“[Esophageal cancer] is a disease that is significant worldwide in terms of incidence and mortality, [as] the incidence ranks as No. 8 [and] the mortality is No. 6,” Nabil F. Saba, MD, said in an interview with OncologyLive®. “The majority of these patients have squamous cell cancer of the esophagus, [and] there has been little progress in advancing care for these patients over the last several decades, until very recently with the introduction of immunotherapy.” Saba is a professor and vice chair for quality and safety in the Department of Hematology and Medical Oncology at Emory University School of Medicine and the Lynne and Howard Halpern Chair in Head and Neck Cancer Research at Winship Cancer Institute in Atlanta, Georgia.

Preclinical models have demonstrated that antiPD-L1 therapies plus CRT have demonstrated synergistic antitumor activity.3 Specifically, investigators noted that PD-L1 was upregulated in the tumor microenvironment following irradiation and that the addition of immune modulators to radiotherapy enhanced T-cell effector functions.

Up to 50% of patients with ESCC have PD-L1 expression and targeted agents have demonstrated successes in this patient population as adjuvant treatments.4,5 “[There have been] little advances in the treatment of ESCC; however, in more recent years, we have seen the introduction of immunotherapy and that has produced significant improvement,” Saba said, noting that several trials have examined the role of immunotherapy in the recurrent metastatic setting for these patients.

However, since most diagnoses of ESCC are made when the disease is in advanced stages, investigators have initiated studies to evaluate the efficacy of immunotherapy in earlier lines of therapy, including in combination with CRT.4,5

For example, investigators assessed the feasibility of PD-L1 blockade with pembrolizumab (Keytruda) plus CRT in patients with locally advanced ESCC in a phase 2 trial (NCT02844075) based on the clinical benefit observed with this regimen in patients with lung cancer.

Eligible patients were required to have histologically confirmed stage IB to III ESCC. Patients received concurrent weekly neoadjuvant chemotherapy of paclitaxel and carboplatin plus radiotherapy at a total dose of 44.1 Gy in 21 fractions, and pembrolizumab at 200 mg every 3 weeks during the 5 weeks followed by surgery. After surgery, patients were treated with pembrolizumab for 2 years or until disease progression, unacceptable toxicity, death, or consent withdrawal. The primary end point was pathologic complete response (pCR) rate in the primary tumor and the secondary end points were OS and disease-free survival (DFS).

The pCR rate in the primary tumor was achieved in 46.1% of patients (n = 28) who underwent resection (95% CI, 28.8%-64.6%). With a median follow-up of 11.7 months, the median OS was not reached. Six-month and 12-month OS rates were 89.3% and 82.1%, respectively. Despite the trial not meeting its primary end point, investigators concluded that the combination approach demonstrated durable response and that the trend toward increased pCR compared with historical data and the absence of new safety signals warrants further investigation.6

Building on the signals of early success with pembrolizumab, Saba said another PD-L1 inhibitor, durvalumab (Imfinzi), has the potential to carve out a role for the treatment of patients with unresectable ESCC. Saba pointed to demonstrated success of durvalumab in the placebo-controlled, phase 3 PACIFIC trial (NCT02125461), which included patients with unresectable stage III non–small cell lung cancer whose disease had not progressed after platinum-based concurrent CRT.7

“Data from the PACIFIC trial does suggest that the early introduction of durvalumab as close to radiation completion as possible did result in a potential advantage to durvalumab compared with placebo,” Saba said.

Patients were randomized 2:1 to received durvalumab (n = 473) or placebo (n = 236) at 1 to 42 days following concurrent CRT. Patients received radiotherapy at a total dose of 60 to 66 Gy in 30 to 33 fractions, and either 10-mg/kg durvalumab intravenously every 2 weeks for 12 months or placebo.

In an effort to translate this benefit to patients with ESCC, investigators have initiated the phase 3 multicenter KUNLUN trial (NCT04550260), in which approximately 600 patients with locally advanced, unresectable ESCC will be randomized 2:1 to receive durvalumab or placebo with dCRT followed by durvalumab or placebo for up to approximately 24 months. All patients will receive dCRT, which will consist of cisplatin plus fluorouracil or cisplatin plus capecitabine plus radiation at a total dose of 50 to 64 Gy (Figure).9 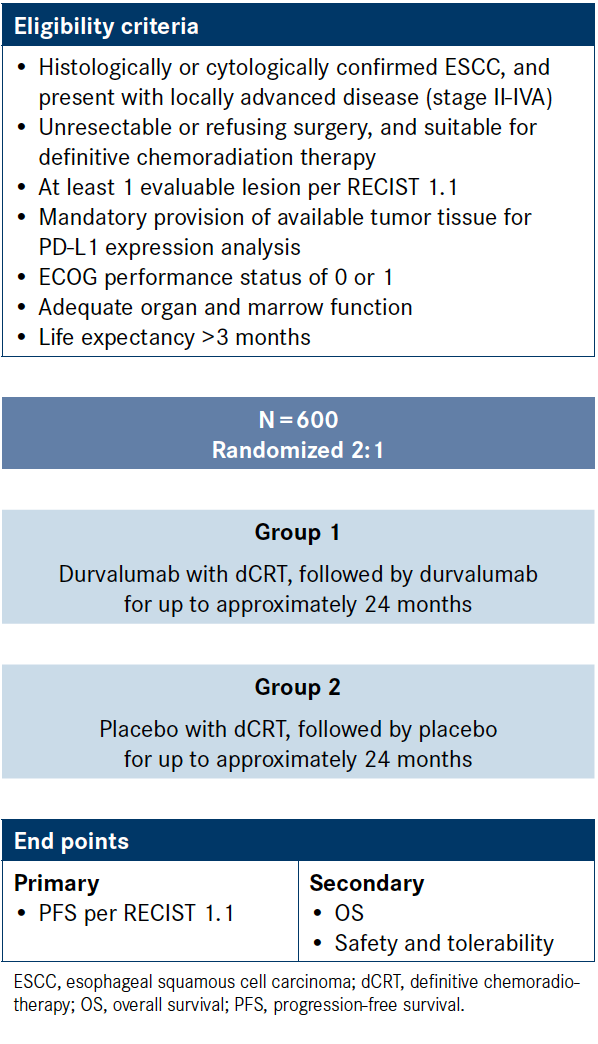 “[The data from the PACIFIC trial] is the reason why KUNLUN essentially includes a sequential approach,” Sada said. The primary efficacy measure is PFS per RECIST 1.1 as assessed by blinded independent central review for all randomized patients who receive durvalumab plus dCRT or placebo plus dCRT and for patients who have PD-L1 high tumors. Additional outcome measures include OS and safety and tolerability.

“It will be interesting to see what the results of the KUNLUN trial show, and in the case that these results do show benefits with durvalumab, this will be a big change in the standard of care for a much-needed patient population,” Saba said.

Recruitment for KUNLUN, which started in October 2020, is underway. The expected study end is October 2026. Recruitment has been deemed a challenge, according to Saba, who said a primary reason is the restrictive eligibility requirements.

“[Eligibility covers] a fraction of the patients with squamous cell of the esophagus who require multimodal therapy, so certainly it does not capture all the patients in this group,” Saba said.

To be eligible for enrollment, patients must have a histologically or cytologically confirmed stage II to IVA unresectable ESCC deemed suitable for dCRT and have been untreated with anticancer therapy. They must also be 18 years or older and have an ECOG performance status of 0 or 1. In addition to adequate organ and marrow function, eligible patients are required to have an available tumor sample for PD-L1 expression analysis less than 3 months prior to screening.

Patients with histologically or cytologically confirmed small cell esophageal carcinoma, esophageal adenocarcinoma, or another mixed carcinoma are not eligible for enrollment. Those who have had prior anticancer treatment—including but not limited to chemotherapy alone, chemotherapy plus radiation, immunotherapy, and investigation agents for ESCC—are not permitted. Additional exclusion criteria are having contraindication to any of the study agents and having active infection, including tuberculosis, hepatitis B, hepatitis C, or HIV.

An additional limitation for US enrollment is that ESCC is not considered a common disease in the West. Notably, most patients with ESCC are geographically located in Southeastern and Central Asia, along the Rift Valley in East Africa, and into South Africa,1 with two-thirds of patients with locally advanced and/or unresectable ESCC located in China.

“Essentially, accrual in the United States and Western Europe has been much different from accrual in China and [other] countries in Southeast [and Central] Asia,” Saba said. “I think the majority of the approval will be from these countries, which would be of interest and may be a little departure from the previous esophageal cancer trials that we have seen in the past.”